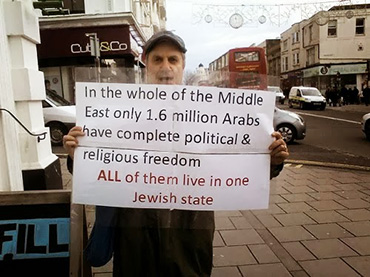 As the crisis in Ukraine unfolded, President Obama met with Benjamin Netanyahu, the Prime Minister of Israel while John Kerry, the Secretary of State, continued to flog Obama's push to get Israel to grant the Palestinians a state of their own. At their meeting Netanyahu was far more concerned with Obama's failure to stop Iran from making its own nuclear weapons. He repeated that Israel will do whatever it must to protect itself.

Within days, the Israeli Navy intercepted a ship. the Klos-C, that contained rockets with a range up to 160 kilometers. It had left Iran loaded with 181 M-302 rockets intended for use by Hamas, the terrorists who control the Gaza. It also had 400,000 rounds of 7.62 ammunition. Does anyone think that either Iran or the Palestinians want anything less than Israel's destruction?

At some point, interest in the Middle East will reassert itself because, while Obama has been in office, it has become an increasing threat to ours and the world's concern as a hotbed of Islamic fanaticism. Other than Israel, Jordan, and some Gulf states, the U.S. has few allies there.

What is rarely, if ever, reported in the mainstream media, the Palestinians have refused to engage in any serious discussions that would lead to the establishment of their own state since the founding of Israel in 1948.

They have preferred their "refugee" status that, at 66 years, makes them the oldest such group in the world. Since 1949 the United Nations has an entire agency, the U.N. Relief and Works Agency, that has been devoted to maintaining the camps in which many live.

Recently, in the spring edition of the Middle East Quarterly, Efraim Karsh had an extraordinary review of how their Arab "brothers" in Arab states have treated the so-called Palestinians. It's worth recalling that "Palestine" was the name the Roman Emperor Hadrian used to try to replace "Israel," but there never was such a nation. Karsh's article was titled "The Palestinian's Real Enemies" as it looked back over the years since Israel reemerged as a nation.

"For most of the twentieth century, inter-Arab politics," writes Karsh, "were dominated by the doctrine of pan-Arabism, postulating the existence of 'a single nation bound by the common ties of language, religion and history...behind the façade of a multiplicity of sovereign states;' and no single issue dominated this doctrine more than the 'Palestine question' with anti-Zionism forming the main common denominator of pan-Arab solidarity and its most effective rallying cry...nothing has done more to expose the hollowness of pan-Arabism than its most celebrated cause."

The Arabs distrust each other more than they are distrusted by the rest of the world. Arab states in the Middle East and in northern Africa are more united by the threat of being taken over by the Islamic fascists of al Qaeda and comparable groups. Both Egypt and the Saudis have banned the Muslim Brotherhood. Ironic, eh?

In his quest to become the caliph of those states, Emir Faisal ibn Hussein of Mecca, the hero of the "Great Arab Revolt" against the Ottoman Empire, together with his father and older brother Abdullah, placed Palestine on the pan-Arab agenda by falsely claiming that those living in what was regarded as southern Syria, had been promised a nation of their own, but in 1919 he signed an agreement with Chaim Weizman, the Zionist leader, supporting the 1917 Balfour Declaration on the establishment of a Jewish national homeland in Palestine. In 1920, he declared himself the king of Syria. After the French removed him, he laid claim to be Iraq's ruler, a position he held until his death in 1933.

Over the decades "the Arab states continued to manipulate the Palestinian national cause to their own ends. Neither Egypt nor Jordan allowed Palestinian self-determination in the parts of Palestine they occupied during the 1948 war." In April 1950, the territory now called the West Bank was formally annexed by the Hashemite kingdom of Jordan.

Hafez Assad who had seized control of Syria, controlling it from 1970 until his death in 2000, described Palestine in 1974 as "a basic part of southern Syria" but said that the Palestine Liberation Organization, appointed by the Arab League in October 1974 was "the sole legitimate representative of the Palestinian people" so long as it did not deviate from the destruction of Israel. It never did, nor has the Palestinian Authority that replaced it.

No matter where Palestinians lived throughout the Middle East, they were endlessly harassed by Arab nations. "As a result, the vast majority of Palestinians have remained stateless refugees with more than half living in abject poverty in twelve squalid and overcrowded camps."

In one Arab nation after another, other than Jordan, they have been refused citizenship and barred from professions and other rights, but even Jordan drove them out when they attempted to seize control in 1970. They fled to Lebanon where they encountered a similar fate, but led by Hezbollah they have gained control there.

"Not only have the host Arab states marginalized and abused their Palestinian guests, but they have not shrunk from massacring them on a grand scale whenever this suited their needs."

In the current Syrian civil war, "thousands of Palestinians have been killed...and tens of thousands have fled the country."

So who are the enemies of the Palestinians? It is not the Israelis who have spent more than six decades trying to come to some arrangement with them to achieve peace and end their daily attacks.

As Obama and Kerry continue to threaten Israel with reprisals if they don't make peace with a people who have never demonstrated any desire for anything other than Israel's destruction, the isolation of the Palestinians is likely to continue for a very long time to come. It was imposed by the Arab states. If those states formally recognize Israel it could end, but that prospect is nowhere in sight.

The current U.S. policy toward Israel and the Palestinians ignores history. Their Arab "brothers" regard the Palestinians as a threat to their state's sovereignty and events in Jordan, Lebanon, and elsewhere confirm that view.