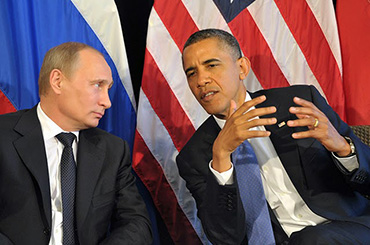 The Ukraine came apart when a protest against its president forced him to flee to Russia. The issue was whether the Ukraine would be allied with Russia or with the European Union. Due to a combination of the obscene corruption of its former president, Viktor Yanukovych, and the mismanagement of the nation in general, the Ukrainian Parliament ousted him in February, a move supported by 328 members of the Parliament. He still claims to be president.

In contrast to the "melting pot" of America where people come from all over and develop strong feelings for our nation, the Ukrainians, divided primarily between the East and West, never quite gelled, the younger generation does not want to be back under the sway of Russia while many of the older ones, recalling the bad old days when it was, want closer ties with Europe. It remains divided and whether it will reunite is anyone's guess.

If it does reunite, it will be missing the Crimean republic which has been seized by Russia's leader, Vladimir Putin. It had been part of Russia for hundreds of years and represents a critical warm water port. Krushchev relinquished it to Ukraine, but Putin will not. Sending troops into a foreign nation is an act of war, but I doubt that many Crimeans, see themselves as a foreign nation. They were Russian and they are Russian. Let's move on.

One thing is for sure, NATO will not intervene to restore Crimea to the Ukraine and the European Union has so many financial ties to Russia that there is little reason to do anything than go through the charade of sanctions and criticism. I think the general consensus is that while Putin would like to expand the Russian Federation to the size of the former Russian empire, the cost of similar military actions would be too high.

The response of President Obama has been predictably weak. He is abandoning the Middle East to Islamic fascists. He has failed to provide an umbrella of military protection to Europe. He and Democrat members of Congress continue to tell us that the greatest threat here and worldwide is a global warming that isn't happening.

The greatest threat to American security is President Obama for two reasons: (1) He has deliberately weakened the U.S. military and (2) his domestic energy policies have failed to take advantage of discoveries of massive amounts of natural gas and oil reserves. Drilling for them on federal lands and offshore has been largely thwarted. As a result the U.S. economy has limped along when it could be booming just from the energy sector alone.

Two reporters for The Wall Street Journal spelled out why the "U.S. Push for Natural-Gas Exports to Ukraine Faces Hurdles" in its March 12the edition.

"Neither the infrastructure nor international markets for natural gas have evolved to the point where the U.S. can step in and provide the kinds of energy supplies that would quickly reduce these nations' dependency on Russian gas."

"U.S. energy companies need several more years to build plants to export the gas – and Ukraine doesn't have the facilities to receive it...The giant machines and cooling towers it takes to make liquefied natural gas, or LNG, take years to construct and cost billions of dollars." There is at present a LNG terminal in Spain that could take gas shipments that could be added to the extensive European pipeline network, helping many nations there such as Hungary and the Czech Republic.

Suffice to say, U.S. policy and lawmakers have failed to take the actions necessary to respond to the recent surge in natural gas and oil supplies. Many Americans will be surprised to learn that in the 1970s Congress made it illegal to export domestically produced crude oil without a license. Those were the days of the Arab oil embargo.

At this point, the U.S. has more untapped oil than Saudi Arabia, as well as enough natural gas and coal to make us energy independent.

In addition, an odd and idiotic law requires the production of ethanol, a gasoline additive. In 2013, ethanol production was 316,964 thousand barrels. Ethanol not only decreases the mileage of the gasoline we purchase at the pump, it damages auto engines, two very good reasons to end this conversion of corn into energy that in turn drives up the cost of countless food products.

Even moving crude oil around the domestic U.S. poses a challenge despite a network of pipelines. Doing so by train has created many new problems. President Obama has delayed the Keystone XL pipeline that would increase crude oil supplies to our Gulf State's refineries; thus denying us the jobs its construction would create and other benefits. The good news is that the U.S. has become one of the largest gross exporters of refined oil products such as gasoline and diesel.

If the U.S. government would get out of the way, new refineries and export facilities for natural gas could be built. The U.S. would prosper and energy costs would be reduced, along with our national debt. For now, however, the Ukraine, a longtime financial basket case, and Europe are not going to get a surge of natural gas or crude oil that would help reduce their dependence on Russia.

So long as President Obama remains in office, none of the steps that must be taken to restore the nation's economy and tap the huge potential of our energy sector will occur.