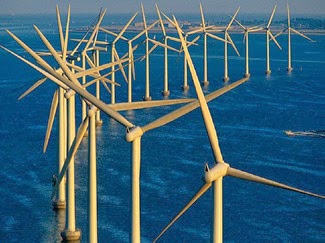 In his state of the union speech in January President Obama claimed that the U.S. was closer to "energy independence" than ever. He was referring to solar energy while ignoring that his administration has been the most anti-fossil fuel energy than any previous one.

The U.S. has the greatest energy reserves, coal, oil and natural gas, of any nation in the world, but Obama has been waging a "war on coal," delaying the construction of the Keystone XL pipeline from Canada, and slow to issue permits to explore for new sources of energy reserves on federal lands. The impact on the economy is incalculable, but it is driving up the cost of energy for everyone and every industry.

Meanwhile, Obama keeps talking about "green jobs" and doubling the nation's supply of renewable energy in the next three years." This another fantasy to which he clings.

As Taylor Smith, a senior policy analyst for The Heartland Institute, points out "Despite years of favorable public policy, including renewable power mandates and billions in subsidies, solar power still produces only about 0.2 percent of the nation's electricity. The National Conference of State Legislatures says power from most large, utility-scaled solar installations still costs about 35 percent more than electricity from natural gas plants; many other experts estimate the levelized cost is even higher."

U.S. Energy Information Administration reports that the United States is producing less electricity now than it did when Obama took office even with the inclusion of wind energy.

From 2008 to 2012, U.S. electricity production declined by 1.7 percent. That's what happens when Environmental Protection Agency regulations force coal mines to close along with coal-fired plants that previously produced 50 percent of the nation's electricity.

In February, the National Review had an article, "Europe's Green Collapse," by Stephen Moore in which he noted that "Not long ago nearly all the nations of Europe bought into this same dream of a green energy free lunch as they legislated tens of billions of dollars in subsidies for solar and wind power while directly and indirectly taxing and capping carbon-based energy."

That policy was set in motion by the United Nations Kyoto treaty in 1997. It was based on the global warming hoax that called for a reduction in so-called "greenhouse gas" emissions. The U.S. did not sign onto the treaty and Canada withdrew from it in 2012.

The Earth, however, has been in a natural cooling cycle for going on seventeen years, the result not of any manmade gases, but because of the Sun has been producing lower levels of solar radiation. The hoax is based largely on the utterly false claim that carbon dioxide warms the Earth when, in fact, it plays virtually no role whatever in the Earth's climate. The Earth is likely to remain cooler for decades.

That fact has been brutally clear in Europe where the cold has been comparable to the temperatures the U.S. has been encountering. Moore reported that "In January Brussels announced with little media fanfare that the European Union is ditching their renewable-energy standards." It is a matter of economic survival for Europe.

What is astonishing is the way both the U.S. and Europe adopted renewable energy production because it is unpredictable and mindlessly expensive. A major factor why the global warming hoax is collapsing, it has cost everyone here and in Europe billions in loans and subsidies. Both solar and wind require a backup from traditional power sources that utilize coal, oil and natural gas.

"Thanks to about $33 billion a year in government subsidies, Germany currently gets 25 percent of its electricity from wind and solar power, and that is scheduled to rise 40 to 45 percent by 2025." Watch Germany abandon its plans. "The EU admits that the cost of electric power in member nations is often 50 to 100 percent higher than in the U.S," noted Moore. "Manufacturers are starting to move plants out of the EU and even to, of all places, the U.S."

"Here is a textbook case of how centralized industrial planning – or 'government investment' as we now say – usually leads to catastrophically wrong bets." In the U.S. it began in the 1970s when President Carter spent billions on renewable energy and projects like the Synthetic Fuels Corporation, a predecessor of Solyndra and other companies that went bankrupt shortly after receiving loans during the Obama administration's first term in office.

Under Obama's "stimulus" program, 83 percent of the American Recovery and Reinvestment Acts Section 1705 loans went to solar energy projects with wind receiving 11 percent of the funds.

"What saved the U.S. economy from replicating the Euro-industrial malaise was the entirely spontaneous oil-and-gas boom driven by technology and billions in investment by wildcat entrepreneurs..." That's called capitalism. The sooner we get the U.S. government out of "investing" in such nonsense, the better.

As with everything else Obama has to say, his advocacy of renewable energy, like Carter's, has proven to be a massive, costly failure.