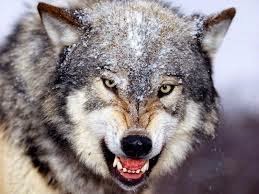 A recent article in The Wall Street Journal took note of what has occurred since the 1990s when some three dozen gray wolves were captured in Canada and transferred to the wilderness of Idaho. According to federal biologists, this was necessary to restore the ecological balance in a region teeming with elk and other creatures on the gray wolf food chain.

The article noted that more than 650 wolves roam the state today according to the Idaho Department of Fish and Game which has been hearing a lot of complaints that the wolves "are wreaking havoc on Idaho's prized elk and livestock, and prompted the governor's office to embark on an effort to wipe out three-quarters or more of the population."

So the federal biologists bring in the wolves and a few years later the governor's office says kill them. Why? Because the elk population has fallen about 15% since the wolves arrived, along with 2,589 sheep, 610 cows, and 72 dogs.

Take a moment on contemplate how arrogant and unconscionably stupid it is to take gray wolves from Canada and put them in Idaho in the name of "ecological balance." The only balance achieved was a significant imbalance in the elk population and witless destruction of sheep and cows which represent a livelihood to ranchers and dinner to the rest of us.

Throughout America we are all paying for the environmental notion of "endangered species" and the quest to "save" some from extinction. The problem with that conceit is that 95% of all the species on Earth have gone extinct over hundreds of millions of years. One paper on this noted that "Mass extinction of biological species has occurred several times in the history of our planet."

The Endangered Species Act became law on December 28, 1973, just over forty years ago. It's not about saving species. It's about providing a vehicle to environmental groups to shut off access to vast areas of the nation in order to prevent drilling for oil and natural gas or mining them for coal and other minerals.

In a December 2013 Wall Street Journal article, Damien Schiff and Julie MacDonald reported that "A law intended to conserve species and habitat has brought about the recovery of only a fraction – less than 2% – of the approximately 2,100 species listed as endangered or threatened since 1973."

"Meanwhile, the law has endangered the economic health of many communities – which creating a cottage industry of litigation that does more to enrich environmental activist groups than benefit the environment."

"One reason the Endangered Species Act has spun out of control is that the federal agencies that decide whether to list a species – the National Oceanic and Atmospheric Administration and the U.S. Fish and Wildlife Service – no longer based decisions on what the law calls for: data. Instead they invent squishy standards like 'best professional judgment.'"

The result of that can be seen in California's San Joaquin Valley where much of the nation's almonds, broccoli, onions, watermelons, lettuce and tomatoes have been grown. About 13% of all agricultural production in the nation takes place in the region where some 250 different crops are grown. That is, until the Natural Resources Defense Council won a lawsuit against California's water-delivery system that they claimed was endangering Delta smelt, on the Endangered Species list since 1994. The result was a manmade drought for the valley's farmers and ranchers. If you wonder why the cost of everything in the vegetable section of your supermarket costs more, you can thank the NRDC. 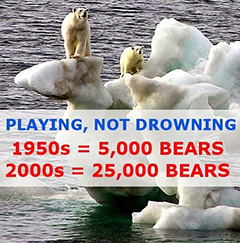 Lying about animal species is so much a part of the environmental movement that polar bears have become a fund-raising symbol over the years despite the fact that polar bear populations, said to be threatened by melting Arctic ice, have been thriving since the 1970s. According to the U.S. Fish and Wildlife Service, there are between 20,000 and 25,000 polar bears worldwide, living in Canada, Greenland, the northern Russian coast, islands of the Norwegian coast and the northwest Alaska coast. Hunting them was banned in the U.S. and worldwide with the exception of Alaskan Natives for tribal needs.

Currently almost half the land west of the Mississippi river belongs to the federal government and environmentalists want to expand on that to prevent the nation's booming oil and gas development. That development could make the U.S. energy independent, create many jobs, and its revenues could significantly reduce the tremendous national debt. At the heart of the environmental movement is an intent to destroy capitalism and reduce the U.S. among other nations to an era before fossil fuels improved life for everyone.

One way to do that is to increase the endangered list by a record 757 new species by 2018. Two species with the greatest impact on private development are range birds, the greater sage grouse and the lesser prairie chicken. Among the environmental groups who specialize in using the Endangered Species Act are the Wildlife Guardians and the Center for Biological Diversity who have been party to more than one thousands lawsuits between 1900 and the present. The Center has made no secret of wanting to end fossil-fuel production in the U.S.

The Endangered Species Act should be repealed because it has a pathetic record regarding its goal over the past forty years and because it threatens the economic development of the nation. Unless or until this occurs, environmentalists will continue their assault on America.