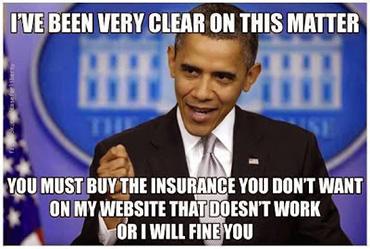 If you type in "Obamacare" on Wikipedia you will discover 25,500,000 links. That's a lot of news coverage and related commentary about the Affordable Care Act. Most of it is negative. The more people have learned about it, the less they like it and, if we had a Congress that could or would do anything about it, it would have been repealed by now.

A March 28 Associated Press poll revealed that only 26% of Americans support Obamacare, a point less than December 2013 and January 2014.

The Republicans in the House of Representatives have voted more than 60 times to repeal or dismantle Obamacare. The Senate, namely Harry Reid its Majority Leader, has killed all efforts to address what is clearly a national catastrophe. When passed in 2009, not one Republican member of Congress voted for it. When it was passed, then Speaker of the House, Nancy Pelosi, famously said they had to pass the 2,700 page act in order to find out what was in it.

In 2010, voters gave power in the House to Republicans, but the Senate remained under Democrat control. The fact that Barack Obama, when campaigning to become President in 2008 and thereafter lied repeatedly to Americans about it has tarnished his reputation and his approval ratings. Since then he has altered the law unilaterally despite the fact that he utterly lacks any constitutional right to do so.

In February the Heritage Foundation's legal experts put together a list of seven illegal actions by the President that included delaying Obamacare's employer mandate, giving Congress and their staffs special taxpayer-funded subsidies, preventing layoff notices from going out just days before the 2012 election, as well as non-Obamacare actions that included gutting the work requirement from welfare reform, stonewalling an application for storing nuclear waste at Yucca Mountain, and making "recess" appointments when the Senate was still legally in session.

The first element of the Obamacare catastrophe is an utterly lawless President who Congress has done little to restrain and nothing to impeach.

Another element of the Obamacare catastrophe has been the failure of the mainstream media to address the impact the law has had on America. On March 26, the Media Research Center reported that "They're just burying the story. They aren't in denial. They know the truth. They're just choosing to ignore it. They are pretending there are no broken promises about keeping your insurance plan, or keeping your doctor, or lowering your premium by $2,500 a year."

An analysis by the Center of the three network evening news broadcasts in 2014 "found only 12 stories on three networks in almost three months." For example, "NBC Nightly News" broadcast only one story on Obamacare and that was on January 1 when Lester Holt called it "a new era in health care in this country." ABC "World News" provided only six minutes and 58 seconds on Obamacare and "CBS Evening News" managed to provide only 19 minutes and 17 seconds over the course of three months.

"None of the networks," said the Center's analysis, "dared to report the ongoing opposition of the American people to Obamacare in 2014, even when they were the ones doing the polling."

Sen. John Thune, (R-SD) posted an article from the Washington Free Beacon on his website, "Fourth Anniversary of Obamacare Brings Billions in Costs to Economy" that cited a report by the American Action Forum that concluded that "From a regulatory perspective, the law has imposed more than $27.2 billion in total private sector costs, $8 billion in unfunded state burdens, and more than 159 million paperwork hours on local government and affected entities."

Sen. Thune said, that "Four years after Obamacare became the law of the land, millions of Americans have little but canceled policies, fewer choices, and skyrocketing costs to show for it. From seniors to young adults, to middle-class families, and small businesses, Obamacare has been to be an equal opportunity offender...people living under this law are acutely aware of the harm Obamacare is causing in their lives."

I have held back from writing about Obamacare because so many others are doing so, but it is impossible to hold back from declaring it the worst law ever passed by Congress and to urge readers to go to the polls in the November midterm elections and remove from office those Democrats who voted for it and are seeking reelection.

There is little need for me to do an Obamacare analysis, but I can recommend one that appeared in The Weekly Standard on February 17. Those who have been following the history of lies and broken promises will find it a detailed study. Is author, Christopher Conover, summed it up saying that "Obamacare has failed miserably on nearly every major promise made about it. The processes used to enact and implement the law have been tarnished by actions of questionable legality and a pervasive lack of transparency."

The ultimate impact of Obamacare on the economy must wait for a calculation, but the demand for its repeal must increase to a point where a future Congress must respond to the voter's demand. Without that, we are headed for an economic collapse.