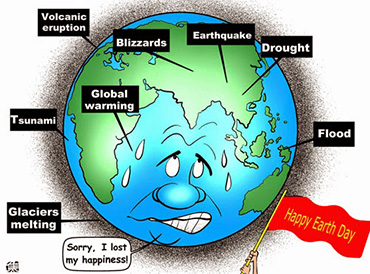 The Earth is 4.5 billion years old. It is the third planet from the Sun and fifth-largest of the eight other planets that orbit it. It is the only planet in our galaxy that has life on it and it has an abundance of mineral resources as well as water and the fecundity to grow crops and maintain livestock to sustain the human race.

The climate on Earth is entirely dependent on the natural cycles of the Sun. Despite four decades of being told that the Earth was going to heat up due to greenhouse gas like carbon dioxide and methane, we are currently in a cooling cycle and no child born since 1997 has ever experienced a single day of the dreaded "global warming."

Humans play a very small role affecting the Earth's climate although, for example, deforestration is one way it has affects it. Other than cutting down trees, another way is to put the government in charge of vast acres of forest. It has a long record of failing to manage them well to the point where diseases and pests render the trees so weak that wildfires wipe out what would otherwise have thrived.

Otherwise, the Earth is and always has a been a very volatile place, subject to a variety of extraordinary natural events such as hurricanes, tsunamis, blizzards, floods, droughts, tornadoes, and earthquakes. The only thing humans can do is clean up and rebuild.

What has mostly changed for humans has been the discovery of energy sources that have transformed and enhanced their lives. Coal, initially, followed by oil and natural gas. All are carbon based, but then, so are humans and other life forms.

The Greens call them "fossil fuels" and some refer to "dirty coal" or seek to demonize "Big Oil." Between 2007 and 2012, three U.S. oil companies paid a total of $289.7 billion in corporate income taxes. Until the Obama administration took power, coal provided fifty percent of all the electricity Americans used. Completely bogus "science" cited by the Environmental Protection Agency has been used to shut down coal-fired plants and close down coal mines. And, in concert with costly, unpredictable and unreliable "renewable" energy, wind and solar, have driven up the cost of electricity for everyone.

According to a study by the Heritage Foundation, released in March, over the next two decades the EPA's climate rules aimed at reducing "global warming" (which is not occurring) will cost the economy $2.23 trillion. An estimated 600,000 jobs will be lost. The jobs that would be created by the Keystone XL pipeline have been waiting five years for the White House to approve the project.

As mentioned, it has been the many inventions that utilize the energy sources the Greens want to "leave in the ground" that have totally transformed the lives of Americans and others throughout the world. What Earth Day is really about is not the improvement of life, but limits that will reduce the world's population. The one thing all environmentalists agree upon is that there are too many humans. This is a form of fascism that goes back to the creation of the communist/socialist economic systems, none of which have provided the level of prosperity that capitalism has. Even Communist China has adopted the capitalist model.

The other agenda Greens agree upon is that the government should own and control every square inch of the nation's (and world's) landmass. That is why climate change is part of the United Nations' intention to become the single world government. It is home to the Intergovernmental Panel on Climate Change that has clung to the global warming hoax since they invented it in the late 1980s.

Along the way, environmental organizations such as Greenpeace, Sierra Club, and Friends of the Earth, among countless others of comparable or lesser size have received millions in membership dues, donations, the sale of products, and from the assets that many own. Many, like Greenpeace, enjoy a non-profit status. For example, in 2011, Greenpeace took in $27,465,948 and had assets of $4,653,179. Multiply that against all the others and it adds up to billions.

Green organizations represent a very big business that is constantly at war with legitimate businesses in the energy, manufacturing, and agricultural sectors, seeking to impose laws and regulations that cost them and consumers billions every year.

If you're a parent take some time to explain to younger children that the Earth is very old and not going to suffer the claims Greens repeat and repeat. As for everyone else, just try to ignore the Earth Day deluge. It won't be easy, but it will be worth it.