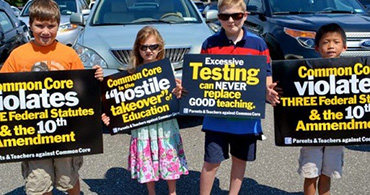 "A lie told often enough becomes the truth," said Vladimir Lenin who led the revolution that imposed Communism on Russia.

When he wrote, 'Mein Kampf,' Adolf Hitler said "whoever has the youth has the future." In his vision for the Nazi Party, education would be the key that ensured that he had 'the youth' of Germany fully indoctrinated.

All dictators and authoritarian regimes know that what is taught in their schools offers the greatest opportunity to maintain control over their societies.

That is what has been occurring since the introduction of the Common Core standards that the Obama regime has imposed on our national education system and the good news is that protests against it from concerned parents and others are beginning to increase and gain momentum.

Teachers will tell you that "one size fits all" does not apply in the classroom and never has. Children learn at a different pace with some doing so rapidly while others need extra help and attention. Learning that is entirely dependent on ceaseless testing puts stress on every child and that is the most common complaint about Common Core.

Education in America has been in decline since the 1960s when the teachers unions gained control over the process, putting themselves between the local boards of education and parents. Would it surprise anyone to learn that the Department of Education was established by President Jimmy Carter who signed it into law in 1979? It began operation on May 4, 1980. You will find no reference, no mention of education in the U.S. Constitution and it should not be a function of the federal government.

In a recent commentary by Joy Pullmann in The Daily Caller, she said, "The latest scheme is the field testing of Common Core assessments. This spring more than four million kids will be required to spend hours on tests that have little connection to what they learned in class this year and will provide their teachers and schools no information about what the kids know."

"Parents who object to this scheme," said Pullman, "face bullying and harassment from public officials. From New York to Denver to California, some schools are responding by forcing kids who opt out to sit at their desks and do nothing during the several-hour tests. Normal people call that a 'time out' and it is a punishment."

Wyoming has become the first State to block a new set of national science standards that address climate change. In Michigan last year a group of protesters stopped the State from adopting the science standards.

Here are some excerpts of what the science standards teach as "The Essential Principles of Climate Science."

# "The impacts of climate change may affect the security of nations. Reduced availability of water, food, and land can lead to competition and conflict among humans, potentially resulting in large groups of climate refugees."

# "Humans may be able to mitigate climate change or lessens its severity by reducing greenhouse gas concentrations through processes that move carbon out of the atmosphere or reduce greenhouse gas emissions."

# "The most immediate strategy is conservation of oil, gas, and coal, which we rely on as fuels for most of our transportation, heating, cooling, agriculture, and electricity. Short-term strategies involve switching from carbon-intensive to renewable energy sources, which also requires building new infrastructure for alternative energy sources."

From "A Framework for K-12 Science Education" children are to be taught that "If Earth's global mean temperature continues to rise, the lives of humans and other organisms will be affected in many different ways." Only the Earth's mean temperature is not rising! The planet is in a natural cooling cycle that is now seventeen years old, meaning that none of the students in today's schools have ever experienced a single day of "global warming."

By the end of grade 8, the Framework teaches that "Human activities have significantly altered the biosphere, sometimes damaging or destroying natural habitats and causing the extinction of many other species." This, too, is untrue. The U.S. Endangered Species Act, despite listing thousands of species, has not officially "saved" more than a handful at best and this assertion is questionable.

By the end of grade 12, students are expected to believe that "Changes in the atmosphere due to human activity have increased carbon dioxide concentrations and thus affect climate." While it is true that there has been an increase in the amount of carbon dioxide this is a good thing because it is an essential factor in the increase of all vegetation that includes food crops and healthier forests. Moreover, this increase does not play any role in the Earth's climate.

The central theme of these "science standards" is to teach that we should be reducing our use of fossil fuels, the primary energy sources our nation and the world requires. What these standards do in reality is repeat and reinforce federal government laws and regulations to justify its CO2 emissions regulations based on the current method of computing the Social Cost of Carbon, but these "costs" are pure fiction.

None of the computer models that have predicted global warming over the past four decades have been accurate. None are capable of representing the state of the Earth's vastly complex climate.

The sooner Common Core is removed from the nation's education system, the better.

Editor's Note: To learn more or follow the debate on Common Core, visit