Alan Caruba
The view from the bottom 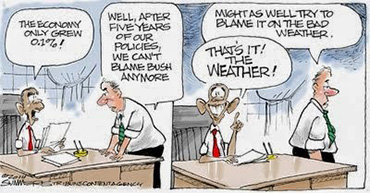 It tells you everything you need to know about the utter contempt those in the White House and the circles of power that the announcement of 0.01% economic growth thus far this year was blamed on – wait for it – the weather! Specifically, a cold winter.

If you have been paying any attention of late, the weather and the climate have become the reason for everything in general and for tornadoes, floods and forest fires, in particular. The fact that these natural events have always been subject to whatever the weather is or the larger climate trends seems to have escaped the notice of too many people. If winter automatically drives down the economy to a point of invisibility, that is news to me.

I'm surprised some economist hasn't blamed winter for the major decline in home ownership. It has hit its lowest level since the mid-1990s according to the Census Bureau. As the Wall Street Journal reported, "despite two years of recovery in the housing market there are still fewer homeowners than there were before the recession." Oh? The recession is over? You could have fooled me.

It is no surprise, however, that China is poised to pass the United States as the world's leading economic power this year. The U.S. has been the global leader since 1872 when it replaced the United Kingdom and now "most economists previously thought China would pull ahead in 2019 according to the Financial Times.

Bear in mind that the U.S. has survived financial crises in the past, but the 2008 meltdown has persisted since around January 20, 2009 when a new President was sworn into office. It didn't take him long to receive a Nobel Peace Prize that year and to preside over the first reduction in the nation's top ranked credit rating in 2011.

Could the economic decline have something to do with the insane increase of federal government regulation? As John Merline asked in Investor's Business Daily, "After years of rapid growth during the Obama administration, the cost of federal regulations is now bigger than the entire economics of all but nine countries in the world." He was reporting on the annual report. "Ten Thousands Commandments," issued by the Competitive Enterprise Institute. Compiled by Clyde Wayne Crews, this year's report found that the "regulation tax" imposed on the economy now tops $1.86 trillion. "By comparison, Canada's entire GDP is $1.82 trillion and India's is $1.84 trillion."

"The problem, Crews notes, is that the combined cost of this 'tax' never shows up anywhere in the federal budget – or any other official report – even though it is now bigger than individual and corporate income taxes combined." The CEI report noted that federal regulatory costs average $14,974 per household "which is more than the typical household spends on just about anything else."

So you don't have to have an economics degree to figure out what is wrong. "Last year," Merline reported, "regulators issued 3,659 rules. That's equal to one new rule every 2 l/2 hours of every day7 or nearly two federal rules issued every business hour." Why is this happening? Because the 2013 Federal Registered contains 79,311 pages, the fourth highest ever and the top two all-time totals were both under President Obama. Big government? No, TOO BIG Big Government.

A new poll surveying young Americans' political attitudes was released at the end of April by Harvard University's Institute of Politics. As indoctrinated as those 18 to 29 have been in our public schools, they are not brain-dead. The survey found that the millennials have less trust in government than ever before in the President, Congress, the Supreme Court, the military, and federal government as a whole. There is a comparable lack of confidence in Wall Street and the United Nations. Unfortunately, less than one-in-four (25%) of Americans under 30 said they would definitely vote in the forthcoming midterm elections, a decrease since last autumn, though more Republican millennials will vote than Democrats.

It's not just the youth who are unhappy. A Wall Street Journal/NBC News poll taken in late April revealed "a marked change from past decades" as "nearly half of those surveyed wanted the U.S. to be less active on the global state, with fewer than one-fifth call for more active engagement – and anti-interventionist current that sweeps across party lines."

This is hardly a surprise as one looks back on the years since 9/11 in which engagement in Afghanistan and Iraq turned out to be failures. In this regard Obama has his finger on the pulse of Americans who are weary of military interventions, but it is equally true he has used this to impose vast reductions on the U.S. military. If they are needed, there will be far less of them and the arsenal they will need.

The poll showed that approval of Obama's handling of foreign policy has sunk to the lowest level of his presidency with 38% approval. His overall job performance now pulls in 47% or so. Both are below half the population of likely voters. The poll also demonstrated how disenchanted they are with the economy "that many believe is stacked against them." The views expressed correlated with income and education, rather than party affiliation.

The state of the economy reflects the factors noted; too much regulation, Obamacare's attack on one sixth of the economy, replete with dozens of taxes within it, as well as the serious disruption of the healthcare system. What it has also done is cause many businesses to put a cap on how many they employ, a dagger in the heart of those coming out of college with few real prospects, those seeking employment after having been laid off due to Obamacare and other factors – some 90 million still.

If the nation does survive Obama, historians will express wonder that he was reelected and that his approval ratings weren't considerably lower. He is still being defended by the mainstream media, so that might account for the latter, but recent revelations about the Benghazi cover-up may have an impact.

The people I talk with are "hanging on," struggling to get by on what money comes in. They are not happy and I suspect they reflect a general unhappiness from the millennials to the senior set.

They are observing the nation and the world from the bottom of the barrel.