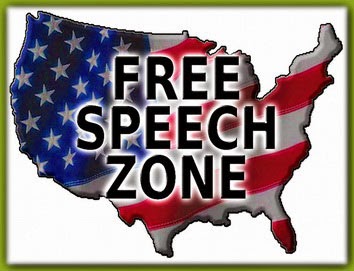 We have been witnessing a growing assault on free speech in America by the Left and too often it is succeeding.

The demand by members of the Rutgers University faculty that former Secretary of State Condoleezza Rice be disinvited to be the commencement speaker is the latest example and her decision to withdraw, while graceful, was a victory for the Left, the liberals for whom free speech exists only if it agrees with their posturing about equality, diversity, and all forms of "justice" as defined only by them.

Our universities are showing ugly signs of censoring the speech of those they invited to give a speech! Brandeis University recently withdrew its invitation to Ayaan Hirsi Ali, a human rights campaigner, because of her criticisms of Islam. In response, she said of the slur on her reputation that, "More deplorable is that an institution set up on the basis of religious freedom should today so deeply betray its own founding principles."

The forced resignation of the co-founder and CEO of Mozilla, Brendan Eich, because, years before, he had made a donation to the California campaign to support traditional marriage is another example. The Left has led the effort to redefine this ancient institution of the union between a man and a woman while supporting the demands of the nation's gay and lesbian community.

Tearing down the foundations of our society has long been a major goal of the Left.

The taping of a private conversation between Donald Sterling, the owner of the Los Angeles Clippers, and his mixed-race mistress who made it public led almost immediately thereafter to the demand by the National Basketball Association that he divest himself of ownership of the team. Yes, Sterling expressed racist views, but free speech includes saying stupid things; things that are sure to offend someone or some group. Saying them privately is very different from saying them publicly. And that speech is protected by the First Amendment.

An extension of the Sterling affair is the way any criticism of President Obama is almost always attributed to the fact that he is black. He is, in fact, only half black. His mother was white. The grandparents who raised him were white.

There is plenty about which to criticize Obama and none of it has to do with the color of his skin.

The level and intensity of political correctness has been rising for years and I have been worrying about it for a long time, particularly with the passage of "hate crime" legislation that goes beyond actual acts based on hatred and includes expressions that are deemed to be hatred.

Our educational system now seeks to exclude anything – and I do mean anything – that might "offend" someone or some group of people. A recent example of school officials who did not want American flag t-shirts being worn during Cinco de Mayo should be offensive to anyone who loves America. The holiday isn't even a major one in Mexico, but demonstrating patriotism is surely not an offense. It gets worse, though, when the singing of Christmas carols are prohibited in a school, an offense against the practice of Christianity and the "diversity" that the Left is always demanding.

The genius of America is its inclusion of all manner of minorities, religions, and points of view. We have a Constitution that protects their rights and those of everyone else. Putting limits on free expression is a danger to the nation and that is what the Left has been trying to do for a very long time.

The federal government has been engaging in policies that are reducing our military strength and security, imposing "Green" policies that are reducing access to the affordable and extensive provision of energy, that is annually adding new regulations by the thousands, that is seeking to make more and more of our landmass federal property, that has a tax code that even the IRS can't understand, that keeps expanding control of our educational system for the purpose of indoctrinating new generations to obey anything it says and does, and now controls your health through a law that requires you purchase insurance you may not want, cannot afford, and is filled with new taxes.

This drift toward socialism is a threat to the freedoms we take for granted. It must be reversed.

One piece of good news is the recent decision by the Supreme Court that prayers at the start of local council meetings may continue, declaring them part of a long national tradition, thus thwarting the effort of atheist groups to keep people from engaging in such prayers if they wish.

"Congress shall make no law respecting an establishment of religion, or prohibiting the free exercise thereof, or abridging the freedom of speech, or of the press, or the right of the people peaceably to assemble, and to petition the Government for a redress of grievances." – The First Amendment.

Those rights will exist only so long as the people defend them. Fight anyone or any group that seeks to undermine them. Whether you lose freedom overnight or by its slow reduction, once lost it is likely lost forever.

And VOTE to put people in office that will fight for you and for the rights the Left is attempting to take from you.