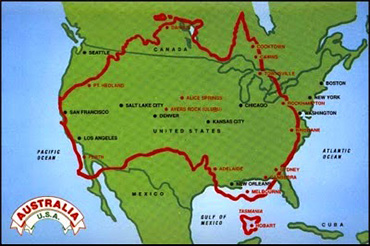 Try to imagine a commission of the U.S. government recommending that it get rid of the Department of Education, the Department of Health and Human Services, countless agencies, and, for good measure, restructure Medicare so it doesn't go broke. There are few Americans who will argue that our federal government isn't big enough and many who trace our present problems to Big Government.

That is why what has been occurring in Australia caught my attention because its voters rid themselves of a political party that imposed both a carbon tax and renewable energy tax on them. The purpose of the latter was to fund the building of wind turbines and solar farms to provide electricity.

Taxing carbon emissions – greenhouse gases – said to be heating the Earth has happily died in the U.S. Senate, but in Australia the taxes were a major reason that the Liberal Party (which is actually politically conservative despite its name) took power after a former Prime Minister, Julia Gillard, pushed it and the renewable energy tax through its parliament.

Gillard became the first woman PM after she challenged then PM Kevin Rudd to lead the Labor Party (which is politically liberal.) Like John Kerry, Gillard was against the taxes before she was for them. How liberal is Rudd? In February he was named a senior fellow of Harvard's John F. Kennedy School of Government. Like Obama, Rudd came out in favor of same-sex marriage when he was the PM.

Bjorn Lomborg, writing in The Australian in late April, noted that both of the taxes "have contributed to household electricity costs rising 110 percent in the past five years, hitting the poor the hardest." I repeat – 110 percent!

It didn't take Australians long to discover what a disaster taxing carbon emissions was and how useless renewable energy is. In both cases the taxes were based on the notion that "fossil fuels," coal, oil and natural gas, are a threat to the environment. Despite an increase in the amount of carbon dioxide in the atmosphere, the Earth has been cooling for the last seventeen years. Mother Nature always has the last word.

As of this writing, the repeal of the two Green laws is in the Parliament's Senate after having won assent in the lower House. A September 2013 election provided enough new Senate lawmakers to ensure the repeal.

The Commonwealth of Australia is the sixth largest nation by total area. It was claimed by Great Britain in 1770 and New South Wales was used as a penal colony initially. As the general population grew and the continent was explored, five more self-governing crown colonies were established. On January 1, 1901, the six colonies and several territories federated to form the Commonwealth. The population is approximately 23 million is highly urbanized and lives primarily in the eastern states.

Australia is the world's 12th largest economy making it one of the wealthiest in the world, but the environmentally-inspired taxes had a deleterious impact on its economy, particularly the mining of coal and iron. As noted, the cost of electricity skyrocketed.

The present Prime Minister is Anthony John "Tony" Abbott. He has held the office since 2013 and has been the leader of the Liberal Party since 2009. A Member of Parliament, he was first elected in 1994 as the representative of Warringah. He made a lot of news when he protested a proposed Emissions Trade Scheme and forced a leadership ballot that defeated it, becoming in the process the Liberal Party leader and leader of the opposition to Rudd and Gillard's Labor Party.

As reported in the April 30 edition of the Sydney Morning Herald, Abbott's Commission of Audit "has recommended massive cuts to the size of government, with whole agencies to be abolished, privatized, or devolved to the states, in what would be the biggest reworking of the federation ever undertaken."

The Commission, the Herald reported, has 86 recommendations, among which are "calls for the axing of multiple agencies and the surrender of huge swathes of responsibility back to the states in education, health, and other services."

The Australian reported that Joseph Benedict "Joe" Hockey, Australia's Treasurer as part of the Abbott government, said that the proposed budget would axe "the vast number of (environmental) agencies that are involved in doing the same thing." Hockey is no fan of wind power, saying "If I can be a little indulgent, I drive to Canberra to go to parliament and I must say I find those wind turbines around Lake George to be utterly offensive. I think they are a blight on the landscape." That kind of candid talk, if he was an American politician, would be considered astonishing.

The best "transformation" America could undergo is not President Obama's version, but a return to the limits set forth in the U.S. Constitution, a document that reflected the Founder's distinct distrust of a large central government and its allocation of civic responsibilities to the individual states to the greatest degree possible, and to "the people."

Australia is way ahead of the U.S. in that regard, learning from the errors of environment laws and the expansion of its government into areas of health and education. We would do well to follow its example.