Alan Caruba
A call for anarchy, not patriotism on May 16 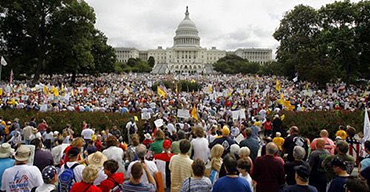 The Constitution grants Americans the right to assemble for the redress of grievances. It does NOT permit the seizure of federal buildings or of elected and appointed representatives for the purpose of removing them from power.

The forthcoming May 16 Operation American Spring is a call for a million or more Americans to come to Washington, D.C. for the purpose of staying in the nation's capital "as long as it takes to see Obama, Biden, Reid, McConnell, Boehner, Pelosi, and Attorney General Holder removed from office." It is a call for anarchy.

Operation American Spring offers the perfect opportunity for elements within the Obama administration to claim the government is under attack even if they were the ones doing an actual armed attack.

Among those million attending would surely be "patriots" who would not heed the organizer's call to not bear arms and to obey all District laws. The purpose of the event is to remove those it says are "threatening our existence, our freedom, our liberty, our Constitution, our life. When the government becomes lawless, then 'we the people' no longer are obligated to follow the government.... At this time the government is performing as a lawless entity."

The federal government is not lawless. Most of us, while unhappy with the gridlock of Congress and the constant stream of lies from the White House, know that it is working for the most part within the constraints of the Constitution. If you want lawlessness, just show up to participate in Operation American Spring.

By contrast, note that there a legal suits in the courts challenging the legitimacy of Obamacare, a tax that was initiated in the Senate when only the House may authorize taxation, and there is congressional action proceeding on both the IRS actions and the deceptions put forth about the Benghazi attack. It's not as if Congress is not taking action or that the courts are not proceeding to address these issues. They are.

Operation American Spring says its goal "is restoring the U.S. Constitution as the law of the land, removing the lawless leadership." We have the means to do that. They are called elections and we have an important one in November.

Why can't the organizers just wait until then? The answer is that they want the President and Attorney General and others it names removed now.

That's not how our system works and we should all have real concern when Operation American Spring says "The militias across the United States are responding and mobilizing to the call to protect the Republic." The problem with this is that a militia is defined as "a group of people who are not part of the armed forces of a country but are trained like soldiers."

Operation American Spring is led by Col. Harry Riley, U.S. Army (Ret), a man who served 34 years in the military before retiring in 1992. Suffice to say he has had a remarkable career and has been the recipient of many awards including the Silver and Bronze Star. He says that what he is calling for is "civil disobedience" and he cites what occurred in Cairo in 2011 as an example, but those demonstrations were against a despot and resulted in the Egyptian military having to step in to remove duly elected members of the Muslim Brotherhood when their leader attempted to dispense with that nation's constitution. That doesn't even begin to describe the state of affairs in America today.

Obama had made it clear he would prefer to rule – not govern – by executive order and regards Congress as a nuisance, but he is not a despot. Not yet.

A massive march and occupation of the nation's capital offers the perfect opportunity for what is known as a "false flag" event that would empower the President to declare martial law and unleash vast arrests and imprisonments that completely bypass the Bill of Rights.

By definition, a false flag operation is one in which elements within a government stage an attack, pretending to be a targeted enemy and then blaming it on those it seeks to control and subdue. Those would be the "patriots" who show up to achieve Operation American Spring's goals.

Restoring the Constitution and the rule of law would literally require a second American Revolution and no one wants or needs that.

Washington, D.C. has hosted many major marches over the years. All have been conducted without violence. None have proposed taking over the government. It's one thing to be unhappy with the President and his administration. It's quite another to ignore the Constitution in the name of restoring it.