Alan Caruba
The slow, sure death of "climate change" lies 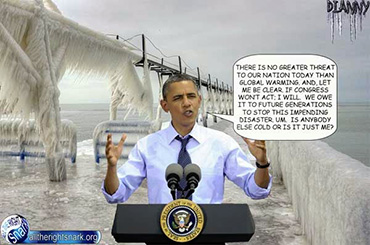 Even though President Obama continues to lie about "climate change" and employs the many elements of the federal government to repeat those lies, this huge hoax is dying.

Obama is on record saying that climate change "once considered an issue for the distant future, has moved firmly into the present" and is "affecting Americans right now." Climate change as studied by climatologists is measured in terms of centuries whereas the weather is what is happening today. It has been happening before and since the rise of civilization. Obama's claim that "climate-related changes are outside of recent experience" and "have become more frequent and/or intense" is a lie from start to finish.

The White House recently released its latest "National Climate Assessment." It is 841 pages of outlandish claims that reflect the lies generated by the United Nations Intergovernmental Panel on Climate Change. When you consider that the federal government spends an estimated $2.6 billion annually in grants for climate research, about the only beneficiaries are those "scientists" employed to further the hoax.

The UN's IPCC was created in 1983 and has issued a series of reports whose sole intention has been to frighten people around the world with claims of global warming that are scientifically baseless.

The Heartland Institute, a non-profit market-based think tank, responded by creating the Nongovernmental International Panel on Climate Change (NIPCC) and by sponsoring a series of international conferences. The 9th conference will be July 7-9 in Las Vegas. That effort began in 2003 in cooperation with the Science & Environmental Project led by Dr. S. Fred Singer and was joined by the Center for the Study of Carbon Dioxide and Global Change.

I am an advisor to the Institute, having written about environmental and energy issues for several decades at this point. 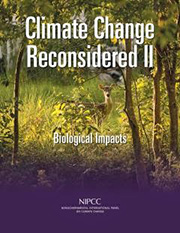 Calling on thousands of scientists around the world, in 2013 the NIPCC published the first of a three-volume response to the IPCC's fifth assessment. This year, it has published a volume of Climate Change Reconsidered devoted to biological impacts, a 1,062 page opus. The NIPCC is an international panel of scientists and scholars with no government affiliation or sponsorship, and it receives no corporate funding.

Writing in the Financial Post in October 2013, Lawrence Solomon, the executive director of Energy Probe, a Toronto-based environmental group, noted that "solar activity is now falling more rapidly than at any time in the last 10,000 years." The Earth's climate is primarily a reflection of solar radiation or the lack of it. From 1300 to 1850, the Earth was subject to a mini-ice age. While the global warming hoax began in the late 1980s, Solomon noted that, in the 1960s and 1970s, the scientific consensus was that the Earth "was entering a period of global cooling. The media in those years was filled with stories about a pending new ice age.

It was only the intervention of the UN's IPCC that changed the "consensus" to one of global warming. A cooling cycle that began around fourteen years ago could lead to another mini-ice age or the planet could be on the cusp of a full-fledged one. On average, the interglacial periods of the Earth have lasted about 11,500 years and we are at the end of such a period.

# "Atmospheric carbon dioxide (CO2) is not a pollutant." Considering that all vegetation on Earth depends on it, it is not surprising that another conclusion was that the ongoing rise in the air's CO2 content is causing a great greening of the Earth.

# As a result, "there is little or no risk of increasing food insecurity due to global warming or rising atmospheric CO2 levels and that terrestrial ecosystems have thrived throughout the world as a result of warming temperatures and rising levels of atmospheric CO2. Multiple lines of evidence indicate animal species are adapting, and in some cases, evolving, to cope with climate change of the modern era."

# In addition, "rising temperatures and atmospheric CO2 levels to no pose a significant threat to aquatic life and that a modest warming of the planet will result in a net reduction of human mortality from temperate-related events."

The irony of the latest NIPCC report, of course, is that it responds to the claims of global warming and carbon dioxide's role at a time when the Earth is cooling. It makes one wish that all the talk about "greenhouse gases" is true enough to help us escape from the present cooling.

One thing we do know for sure is that the Greens talk of climate change has lost its grip on the public imagination and attention. As the cooling cycle continues, people around the world will be far more focused on increased evidence of massive ice sheets at both poles, on frozen lakes and rivers, on shortened growing seasons, and on the desperate need for more fossil fuels to warm our homes and workplaces.