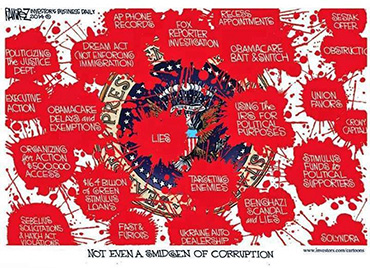 Listening to President Obama respond on May 21 to the latest scandal regarding something about which he knew and did nothing – the mess at the Veterans Administration – was such a familiar event that I have reached a point of exhaustion trying to keep up with everything that has been so wrong about his six years in office. As he always does, he said was really angry about it.

Writing in the May 20 Washington Post, Jennifer Rubin said, "Forget ideology for a moment. Whether you are liberal or conservative, the Obama presidency's parade of miscues is jaw-dropping."

Stacked against the list of Obama scandals and failures, Rubin could only cite the Bush administration's 2005 handling of Hurricane Katrina, the seventh most intense ever, and, as anyone familiar with that event will tell you, the failure of FEMA's response was matched by the failures of Louisiana Governor Kathleen Blanco and the New Orleans Mayor Ray Nagin. Bush had declared a national emergency two days before it hit the Gulf coast.

Rubin concluded that the Obama administration scandals "reflect the most widespread failure of executive leadership since the Harding administration," adding "The presidency is an executive job. We hire neophytes at our peril. When there is an atmosphere in which accountability is not stressed you get more scandals and fiascos."

Obama spent his entire first term blaming all such things on his predecessor, George W. Bush, until it became a joke.

One has to wonder about the effect of the endless succession of scandals and fiascos have had on Americans as individuals and the nation as a whole.

While it is easier to lay all the blame on Obama, the fact is that much of the blame is the result of a federal government that is so big no President could possibly know about the countless programs being undertaken within its departments and agencies, and all the Presidents dating back to Teddy Roosevelt's progressive initiatives have played a role in growing the government.

It is, however, the President who selects the cabinet members responsible to manage the departments as well as those appointed to manage the various agencies. Kathleen Sebelius, the recently resigned former Secretary of the Department of Health and Human Services, responsible for the implementation of Obamacare, comes to mind. She had solicited donations – against the law – from the companies HHS regulates to help her sign up uninsured Americans for Obamacare and signed off on the millions spent on HealthCare.gov and other expenses leading up to its start. 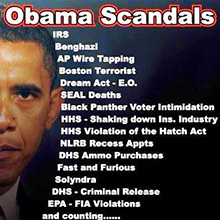 There are lists of the Obama scandals you can Google. One that continues to fester is the attack on September 11, 2012 – the anniversary of 9/11 – that killed an American ambassador and three security personnel in Benghazi, Libya. It has been and continues to be investigated, mostly because of the lies told by Obama and then Secretary of State Hillary Clinton of "What difference at this point does it make?" fame. Clinton was asked what she had accomplished in her four years as Secretary and was unable to name anything.

Eric Holder, our Attorney General, continues in office despite having been held in contempt of Congress, professing that he knew nothing about "Fast and Furious," the earliest scandal involving a gun-running scheme to Mexican drug cartels by the ATF presumably to track them, but they lost track and many were used in crimes including the killing of a Border Patrol agent.

Holder also told Congress that he was not associated with the "potential prosecution" of a journalist even though he had signed the affidavit that named Fox News reporter, James Rosen. as a potential criminal. Holder was also in charge when the Justice Department culled the phone records of Associated Press reporters to find out who they deemed was leaking information.

Keeping track of the solar power and other "renewable" and "Green" energy companies like Solyndra that received millions in grants and then rather swiftly went bankrupt became a fulltime effort and, of course, there was the "stimulus" that wasted billions without generating any "shovel ready jobs" qualifies as a fiasco.

In the midst of the recession that was triggered by the 2008 financial crisis various elements of the Obama administration continued to spend money in ways that suggested their indifference. In 2010 the General Services Administration held a $823,000 training conference in Las Vegas, complete with a clown and mind readers.

An Agriculture Department program to compensate black farmers who allegedly had been discriminated against by the agency turned into a gravy train that delivered several billion dollars to thousands of recipients, some of whom probably had not encountered discrimination.

The Veterans Affairs agency made news when it spent more than $6 million on two conferences in Orlando, Florida, and is back in the news for revelations about alleged falsified records concerning the waiting times veterans faced amidst assertions that many died while waiting for treatment surfaced. This was a problem of which the then-Senator Obama was already aware, but six years into his presidency it still existed despite his early promises to fix it.

Obama has been the biggest of Big Government Presidents since the days of Franklin D. Roosevelt and Lyndon Johnson, and Obamacare put the federal government in control of one sixth of the nation's economy while putting the government in charge of the care Americans expect to receive. Obamacare will dwarf the problems associated with the Veterans agency.

Meanwhile, we have been living with a President who is so indifferent to working with Congress that he has gained fame for his use of executive orders such as the decision to not deport illegal immigrants. His aides have promised more executive orders.

All this over the course of the last six years has left Americans exhausted by the incompetence and wastefulness of an administration that now presides over the highest national debt in the history of the nation and the first ever downgrade of our credit rating.

It has also left them angry if they were conservatives and disillusioned if they were Obama supporters. The Veterans Administration scandal is likely a tipping point for the independent voters and even for longtime Democrats who will want a change.

It is increasingly likely that the November midterm elections give the Republican Party control over the Senate as well as the House and then to hope that it will begin to rein in the spending and save the nation from a financial collapse that will rival the one in 2008.