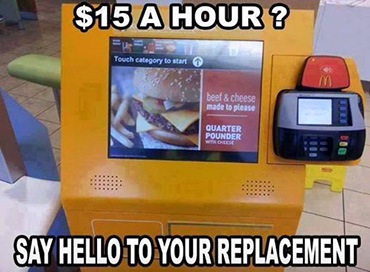 It's June, a month famed for marriages, but it is likely to be remembered for the high rate of teen unemployment which has been soaring for a long time. By February, the national unemployment rate for youth, age 16 to 19, had reached 20.7%. By November 2013 it was three times higher than the national average of 6.6% according to the Bureau of Labor Statistics.

Teens are rivaled by the number of American men in their prime working years, a record 1-in-8,who are not in the labor force. These men, age 25-54, represent 61.1 million who are either not working or no longer looking for work. The Weekly Standard reported that "This is an all-time high dating back to when records were first kept in 1955."

The non-partisan Congressional Budget Office released a report in February that said the wage hike to $10.10 could result in a net loss of about a half a million workers at the same time in increased wages for 16.5 million others.

So, naturally, President Obama in his State of the Union speech, called on Congress to raise the national minimum wage from $7.25 to 10.10 an hour. Soon after, he signed an Executive Order to raise the minimum wage for individuals working on new federal service contracts. That means that taxpayers will pay more for those services as the cost gets passed along. Does he have the power to impose the increase? Probably not.

Meanwhile in California where countless businesses are fleeing thanks to the insanity of its liberal legislature and Governor, as May ended its senate approved a measure that would lift the state pay floor to $13.00 an hour by 2017. If it becomes law, Californians will be interacting with machines for everything from banking to filling their gas tank to having a fast-food meal. Even more insane, Seattle has become home to the highest minimum wage in the nation, $15.00 an hour!

Minimum wage laws have been around a long time. Their original goal was to raise the income of the working poor, but the fact that there is still talk of raising them suggests they don't work as intended. Letting the job market determine wages holds a greater promise of increased wages because businesses have to remain competitive and that means paying a wage that attracts skilled and even unskilled workers.

As Thomas E. Hall, the author of "Aftermath: The Unintended Consequences of Public Policies" (Cato Institute, $24.95, due in August) notes, "The living wage concept moved to the forefront during the Industrial Revolution, along with calls to end practices such as child labor and conditions poor working women faced. Massachusetts passed the nation's first minimum wage law in 1912.

One of the outcomes of the Great Depression, 1929 to 1941, was the inclusion of a minimum wage as part of the New Deal's National Industrial Recovery Act. Suffice to say, the NIRA, which actually encouraged businesses to collude together to set prices, failed to promote economic recovery. It was very unpopular and in 1935 the Supreme Court declared it unconstitutional.

Because liberals never learn anything from experience, the NIRA was resurrected later in the 1938 Fair Labor Standards Act that raised the minimum wage to 40 cents in 1945. "The United States has had a federal minimum wage ever since."

Politicians and even some demented economists like the minimum wage. Every time it is raised, it appears to the general public that working people benefit. The problem is that the wage increases also include increases in unemployment as businesses try to contain costs in order to remain competitive and make a profit.

As Hall, a professor of economics at Miami University in Oxford, Ohio, notes, "The minimum wage's first significant impact on national labor market conditions occurred in 1956, when the hourly rate was raised from 75 cents to $1.00." The increase had its "greatest impact on teenagers because they possess the fewest marketable skills among the working-age population. Also, teens often do, or have in the past, worked at jobs easily replaceable with machinery or by conducting business in a different manner."

The minimum wage rate, nonetheless, has continued to increase since the 1950s and, "By the early 1990s, these changes had caused to minimum wage to apply to over 90 percent of the U.S. workforce."

Here's the fundamental lesson about the minimum wage that continues to be ignored. "President Ronald Reagan, who occupied the White House from 1981 to 1989, did not support further increases because he believed that raising the minimum wage would discourage employment growth...during that decade, the U.S. economy created 18 million new jobs."

As Hall succinctly points out "Remember that the minimum wage is just a government-imposed price-fixing scheme that creates winners and losers."

Teens that stayed in school and will either be facing a summer vacation or graduating are particularly disadvantaged by a minimum wage law.

"The effects of high unemployment among this demographic group," says Hall, "should not be discounted. One reason is that the lack of employment opportunities for young people deprives them of valuable work experience in the form of learning the responsibility of showing up for a job on time, learning to follow directions and complete tasks, learning to work with others...these skills can prove to be beneficial later in life."

It is likely that the minimum wage is also a factor in why many men in the 25-54 age cohort are not working either. This is hardly the time to be increasing the rate unless you want to see the rate of unemployment increase for all ages and both sexes.

By contrast, in addition to the energy sector, the sector that builds machines to replace human workers is likely to do very well over the coming years.