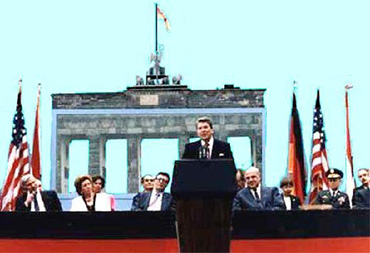 On June 12, 1987, the President of the United States, Ronald Reagan, speaking in Berlin, said, "Mr. Gorbachev, tear down this wall." It fell in 1989 and, in 1991, the Soviet Union collapsed. From the end of World War Two in 1945, the United States had stood strong against the Communist empire's effort to extend its power and influence around the world.

Today, however, we have a President who not only swapped five Taliban generals, men whom the United Nations regards as war criminals, but likely also paid a yet unreported ransom as well. We have a President who made it clear that he intended to close Guantanamo where jihadist enemies have been detained because he thinks the United States is provoking the Islamic fanatics by maintaining it.

President Obama's mindset is so favorable to Islam that he seemingly cannot grasp that jihad is a sacred duty for Muslims and nothing the U.S. or any other nation does will cause their holy war to end. Or maybe he does understand that and his true sympathies are with the growing army of Islamists?

The Rand Corporation, a think tank, recently released a report noting the accelerating rate of jihadist groups worldwide and the number of jihadist fighters which it estimates at 100,000. The number of attacks by al Qaeda affiliates between 2010 and 2013 rose to approximately one thousand from an initial 392.

The five Taliban generals were sent to Qatar, a small Arab state that borders Saudi Arabia, with the understanding they would remain there for a year. That is unlikely. Muslims are permitted to lie to infidels to advance Islam and jihad. The practice is call taqqiya. I have little doubt we will see them return to Afghanistan and Pakistan, both of which are still home to al Qaeda and allied groups such as Lashkar-e-Taiba and the Taliban.

At the heart of the deal struck to get the return of Sgt. Bowe Bergdahl, a deserter from his unit in Afghanistan, bespeaks the utter weakness of American foreign policy that has been the hallmark of the Obama administration. In a recent commentary,"Meet Obama's Kissingers,"Wall Street Journal columnist, Kimberly A. Strassel, spelled out the alarming fact that Obama's key national security and foreign affairs advisors are all politicians as opposed to experts in those respective fields.

Presidents dating back to Harry Truman who initiated the National Security Council have relied on it for decision-making, but Obama's first advisor, Marine General and NATO Commander, Jim Jones, left after just two years "following clashes with Mr. Obama's inner circle." Today, the most visible member of the NSC is Susan Rice who has established a reputation for appearing on Sunday television news programs to lie about the cause of the 2012 Benghazi attack and now the character of Sgt. Bergdahl.

Obama has never made a secret of the fact that he wanted U.S. troops out of Iraq and is looking forward to removing them from Afghanistan. It is true that Americans had grown weary of these long military engagements. Even the ancient Romans felt the same way in their time. The Iraq withdrawal has left behind a nation besieged with bombing attacks in its major cities that are ceding control to the Iraqi branch of al Qaeda and Afghanistan will return to the horrors of Taliban control once our troops are gone.

There are times when a President must use his powers as Commander-in-Chief to demonstrate that those who kill Americans or pose a significant threat must be reminded of our power. Reagan did this in Libya with a bombing that got the attention of its dictator Muamar Gaddafi and Clinton did this with a strike against a suspected chemical weapons facility in Sudan. Obama's weapon of choice has been armed drones, but his use of them against al Qaeda leaders has diminished to zero since last December.

It was not lost on anyone that the Iranians released captive American diplomats the day Ronald Reagan was first sworn into office. They knew this was a President who would respond in ways that would make them pay for this outrage. As he once said, "Of the four wars in my lifetime, none came about because the U.S. was too strong."

Obama, by contrast, exudes weakness. His speech at West Point was universally deemed an ineffectual response to the realities of the threats the U.S and its allies face around the world.

At one point he told the graduating cadets, "But as I said last year, in taking direct action we must uphold standards that reflect our values. That means taking strikes only when we face a continuing, imminent threat and only where there is no certainty – there is near certainty of no civilian casualties. For our actions should meet a simple test: We must not create more enemies than we take off the battlefield."

I began with a Reagan quote and will conclude with one.

"It was leadership here at home that gave us strong American influence abroad, and the collapse of imperial Communism. Great nations have responsibilities to lead, and we should always be cautious of those who would lower our profile, because they might just wind up lowering our flag." – February 3, 1994.