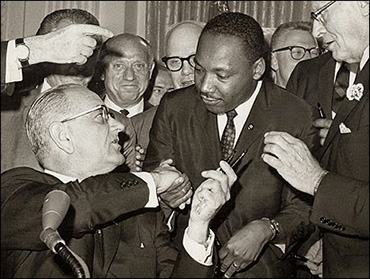 Fifty years ago, 1964, the civil rights movement that had begun in the 1950s achieved its goal with the Civil Rights Act and a year later with the Voting Rights Act. 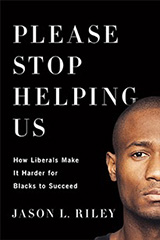 A remarkable book, "Please Stop Helping Us: How Liberals Make It Harder for Blacks to Succeed," by Jason L. Riley, a member of the Wall Street Journal's editorial board who is black, should be must-reading by Afro-Americans and white Americans to understand that, while there has been progress for those blacks who achieved an education and moved into the middle and upper classes of America, far too many blacks have embraced a culture that has doomed them to poverty, prison, and a sense of victimization.

Having lived through the civil rights movement, observing it from the vantage point of having seen the segregation and prejudice that had afflicted blacks prior to it, I was not surprised by the evidence put forth in Riley's book of self-inflicted failure to embrace the opportunities as other groups have done.

On June 16 Riley wrote an opinion article, "How Not to Help Black Americans", saying that "The Obama presidency is evidence that blacks have progressed politically. But if the rise of other racial and ethnic groups is any indication, black social and economic problems are less about politics than about culture. The persistently high black jobless rate is more a consequence of unemployability than of discrimination in hiring."

Statistics from the U.S. Census Bureau in 2012 are testimony to the progress black Americans have made since 1964. Out of 313 million Americans, blacks constitute 44.5 million and 83.2% of blacks age 25 and older had a high school diploma while 18.7% had a bachelor's degree or higher; 1.6 million had an advanced degree. Blacks can take pride in their 2.4 military veterans.

Referring to the vast welfare state in America, Riley said "One reason that Uncle Sam's altruism has not been successful is because the government is attempting to do for blacks what blacks can only do for themselves."

The most depressing statistic, however, is the 40% of some 2.1 million male inmates in jails and prisons in America who are black. Statistically, blacks are far more likely to be the victims of crimes by other blacks than by non-blacks. In his book, Riley says "Black cultural attitudes toward work, authority, dress, sex, and violence have also proven counterproductive, inhibiting the development of the kind of human capital that has led to socioeconomic advancement for other groups."

One black who has succeeded is Barack Hussein Obama, twice elected President of the United States of America. He is likely he will be the last black American to hold that office for a generation or more to come because he has done more harm to the nation in six and a half years than any previous President. The only part of the population that does not seem to grasp this has been black Americans.

Ironically, the results of a survey by Rasmussen Reports released in July 2013 found that "Americans consider blacks more likely to be racist than whites and Hispanics. Thirty-seven percent (37%) of American adults thought most black Americans are racist while just 15% considered most white Americans racist. Just 30% of all Americans thought that race relations in America were good or excellent. Race in America has been a contentious issue from the days of the founders and earlier.

The black community in America has some truly outstanding leaders these days such as former Representative Allen West and Dr. Ben Carson, and there has been a generation of blacks who have risen to success in the corporate world or as entrepreneurs and professionals.

America's first black President has done little to improve the lives of black Americans, resisting charter schools and vouchers to free them from failed public schools, and embracing the same tried-and-failed liberal social programs that continue to keep too many in poverty or in jail. Obama's two terms in office will be remembered for their scandals and for their attacks on the liberty and freedom that all Americans value.