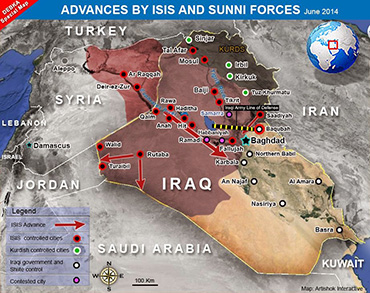 Having contributed to the situation that has destroyed Iraq as a nation by withdrawing all U.S. troops, President Obama now wants to throw $500 million at the problem of the Islamic State of Iraq and Syria (ISIS). While sending a rising number of "military advisors," Obama announced there will be no "boots on the ground" to protect what is left of Iraq. He has demonstrated a fatal ignorance of history and of war.

On June 29, DEBKA File, an Israeli news outlet, reported "The Obama administration announced Friday, June 27, that unmanned aerial vehicles flying over Baghdad would henceforth be armed in order to defend the US Embassy in the Green Zone. The embassy was originally assigned the tasks of guardian of Iraq's central government and symbol of post-Saddam national unity. These roles have remained out of reach ever since the Americans invaded Iraq in 2003. Today, the armed drones overhead are reduced to holding back the Islamic State of Iraq and the Levant (ISIS) and its local Sunni allies from overrunning the Green Zone and seizing the embassy, most of whose 5,000 staff were evacuated."

General Douglas McArthur, the legendary warrior of World War Two in the Pacific theatre, said this of the difference between victory and defeat:

"The history of the failure of war can almost be summed up in two words: too late.

* Too late in comprehending the deadly purpose of a potential enemy.

* Too late in realizing the mortal danger.

* Too late in preparedness.

* Too late in uniting all possible forces for resistance.

* Too late in standing with one's friends."

Obama has failed on all points, preferring to think that any of the nations of the Middle East with the exception of Israel had any good will for America. He has squandered Israel's with idiotic demands that it return to its 1967 borders, criticism of it settlements, and the failure to understand that the Palestinians have never wanted statehood without the total destruction of Israel.

He has never understood that Islam was and is the enemy, not only of America, but the West and everywhere else in a world that it believes must be dominated. It is not the "religion of peace" and never was. Its spread was based on conquest. The Middle East was the birthplace of Christianity and Islam has shown little tolerance for its places of worship and Christians with a relatively few exceptions. When things get tense, Christians get killed as occurred in Egypt with the Copts during its "Arab Spring."

An example is Turkey's Hagia Sophia, originally a cathedral and now a museum, but perhaps not much longer. In December 2013, the government let it be known it is considering turning the notable landmark into a mosque. This has been standard operating procedure throughout Islam's history as has Islam's unremitting warfare between Sunnis and Shiites.

As Gary C. Gambill, a scholar at the Middle East Forum, noted recently, "First, understand that the United States didn't start this fire and can't put it out. The sectarian conflict now raging between Muslims in the heart of the Arab world was primed to erupt by decades of brutal minoritarian rule in both Syrian (Alawites over minority Sunnis) and Iraq (Sunnies over majority Shiites), and by over a millennium of religious antagonism before that."

Gambill does not believe that ISIS will progress to take control of Baghdad or the southern portion of Iraq, adding that "the Iranians will be delighted if the U.S. Air Force starts pounding ISIS...Prospective American intervention will be less about defending Baghdad than about helping Iranian-backed government forces and Shiite militias seize back the Sunni heartland of northwest Iraq. The Iranians would love for the Obama administration to share the costs and take some of the heat for the horrific measures that will be necessary to cleanse Iraq of ISIS."

On television news shows, one can find a retired general in any hour calling for America to attack ISIS in northern Iraq and its bases in parts of Syria. That's how generals understand conflict. If you have an enemy, you attack it, but ISIS has enemies, not the least of which is what remains of Shiite Iraq as well as Iran, a Shiite nation with its own ambitions to exercise hegemony over the entire Middle East.

Iraq and Syria were literally invented by the French, British, and American victors in World War One when they fashioned the Versailles Treaty. Turkey had sided with Germany and the Austria-Hungarian Empire and when they were defeated the Ottoman Empire became new spheres of influence for the winners. The Treaty drew the borders of Syria, Iraq, Lebanon, and something they called the Palestinian mandate, later to become Israel. The borders paid no heed to local geography, tribal affiliations or national identity. The result was discord, infighting, and hatred between the groups pushed together in artificial nation states.

Once the U.S. deposed Iraq's dictator, Saddam Hussein, it inspired the oppressed people in other Middle East nations to overthrow their dictators. Tunisia's was the first to go, followed by Egypt's and then Libya's. Obama's instinct was to back the Muslim Brotherhood in Egypt. It has since been banned there. He involved the U.S. military via NATO in the overthrow of Muammar Gadhafi in Libya.

If history is any guide, ISIS will encounter opposition from other elements within Islam and, despite its troops and its wealth will find itself under attack from those elements that want to remain the leading powers, both nationally and from non-state factions. The best course of action should be to let the Sunnis and the Shiites sort it out as they have for more than a millennium of savagery against one another.