Alan Caruba
It's only a "war" if Israel defends itself 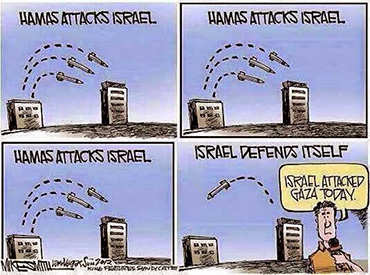 There are many reasons why Hamas, a terrorist organization according to the U.S. State Department, has increased its rocketing of Israel. And it is an increase because Hamas has never ceased from rocketing Israel following it seizure of Gaza from the Palestinian Authority, also known as Fatah.

Hamas is Iran's Palestinian proxy in the war on Israel in much the same fashion as Hezbollah which controls Lebanon. It lost its support from Syria's dictator who is engaged in a civil war with Islamists who, controlling a swath of its northern region, have now declared an Islamic State and are threatening Baghdad in Iraq after a swift military victory in its northern and central region. Hamas has also lost the support of Egypt's Muslim Brotherhood which has been banned there.

The rocket attacks by Hamas on Israel have generated four conflicts since 2006 during which Israel took military action to reduce them. Israel is only considered to be "at war" when it takes steps to defend itself.

Hamas knows it cannot "win" a military conflict, but as Middle East expert, Dr. Daniel Pipes, noted in the July 11 edition of National Review Online, "The holy grail of political warfare is to win the sympathy of the global Left by presenting oneself as underdog and victim." The current conflict began when three Israeli teens were kidnapped and killed. This led Israel to round up suspects in the West Bank in the course of searching for the boys. Regrettably an Arab youth was killed in revenge and this was followed by a rain of missiles and rockets from Gaza.

As Jonathan Spyer, a senior research fellow at Israel's Global Research in International Affairs Center, noted, "There is a tendency to see the Israel-Palestinian arena as somehow set apart from the rest of the Mideast neighborhood, but this is an illusion. Firstly, in the most tangible way, the most potent elements of the Hamas assault on Israeli cities of recent days is made possible only by the movement's link with Iran."

The primary reason Israel has not suffered the problems of Syria and Iraq has been its defense forces. "More profoundly, in the simple and brutal logic of the neighborhood, Israel is trying to remind Hamas of the cost of tangling with the Jewish state," says Spyer. "The objective of this is not to reconquer Gaza, nor to impact on local politics, still less to impose suffering on the Palestinians for its own sake."

To demonstrate how deeply rooted the hatred of Israel is in the minds and hearts of Palestinians who have never agreed to any terms of peace, David Horowitz, the editor of Times of Israel noted on July 8 that "Gaza could have flourished after Israel wrenched its 8,000 civilians from the 20-plus settlements there in 2005." Yes, it was Israel that cleared Gaza of its Jewish population to provide a place for the Palestinians to live together!

"Gazans," said Horowitz, "could have built an island of democracy. Investment could have grown, as it did in the early 1990s, when expat Palestinian investors, believing better times were at hand, fueled a brief property boom. Gaza's golden beaches could have been a promising tourism draw. If Gaza had become a seemingly stable area, Israel might even have felt sufficiently trusting of the Palestinians as to attempt a similar unilateral withdrawal from the West Bank."

Instead, "hostility to Israel was so profound that Gazans couldn't even restrain themselves for long enough to fool us into trusting them." Instead, in recent weeks "Hamas is firing some of its 100,000-rocket arsenal because it has nothing much to lose anymore – that it has lost the support of Egypt, that it can't get the money to pay salaries..." Hamas, the Palestinians, and the Sunni-Shiite hostilities of the Mideast all testify to the complete inability of its Arab population to seek peace with anyone, including each other.

As a July 9 Wall Street Journal editorial noted, "Hamas may also believe it can repeatedly go to war against a militarily superior foe because Israel has never exacted a fatal price. Hamas's aggression serves its political purposes, while Palestinian casualties serve its propaganda purposes."

"All of this will be condemned by the usual suspects. But Israelis will be denounced for whatever they do, so they might as well act effectively."

Dr. Pipes noted that, at this point, "Worldwide condemnations of Israel have yet to pour in. Even the Arabic media are relatively quiet. If this pattern holds, Hamas might conclude that raining rockets on Israeli homes is not such a good idea. Indeed, to dissuade it from initiating another assault in a few years, it needs to lose both the military and the political wars, and lose them very badly."

Israel knows this and will engage in a significant military effort that includes sending troops into Gaza in addition to air strikes.