Alan Caruba
A great plan to replace the EPA 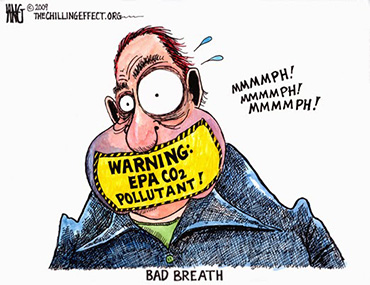 For years now I have been saying that the Environmental Protection Agency (EPA) must be eliminated and its powers given to the fifty states, all of which,have their own departments of environmental protection. Until now, however, there has been no plan put forth to do so.

Dr. Jay Lehr has done just that and his plan no doubt will be sent to the members of Congress and the state governors. Titled "Replacing the Environmental Protection Agency" it should be read by everyone who, like Dr. Lehr, has concluded that the EPA was a good idea when it was introduced in 1971, but has since evolved into a rogue agency threatening the U.S. economy, attacking the fundamental concept of private property, and the lives of all Americans in countless and costly ways.

Dr. Lehr is the Science Director and Senior Fellow of The Heartland Institute, for whom I am a policy advisor. He is a leading authority on groundwater hydrology and the author of more than 500 magazine and journal articles, and 30 books. He has testified before Congress on more than three dozen occasions on environmental issues and consulted with nearly every agency of the federal government and with many foreign countries. The Institute is a national nonprofit research and education organizations supported by voluntary contributions.

Ironically, he was among the scientists who called for the creation of the EPA and served on many of the then-new agency's advisory councils. Over the course of its first ten years, he helped write a significant number of legislative bills to create a safety net for the environment.

As he notes in his plan, "Beginning around 1981, liberal activist groups recognized EPA could be used to advance their political agenda by regulating virtually all human activities regardless of their impact on the environment. Politicians recognized they could win votes by posing as protectors of the public health and wildlife. Industries saw a way to use regulations to handicap competitors or help themselves to public subsidies. Since that time, not a single environmental law or regulation has passed that benefited either the environment or society."

"The takeover of EPA and all of its activities by liberal activists was slow and methodical over the past 30 years. Today, EPA is all but a wholly owned subsidiary of liberal activist groups. Its rules account for about half of the nearly $2 trillion a year cost of complying with all national regulations in the U.S. President Barack Obama is using it to circumvent Congress to impose regulations on the energy sector that will cause prices to 'skyrocket.' It is a rogue agency."

Dr. Lehr says that "Incremental reform of EPA is simply not an option." He's right.

"I have come to believe that the national EPA must be systematically dismantled and replaced by a Committee of the Whole of the 50 state environmental protection agencies. Those agencies in nearly all cases long ago took over primary responsibility for the implementation of environmental laws passed by Congress (or simply handed down by EPA as fiat rulings without congressional vote or oversight."

Looking back over the years, Dr. Lehr notes that "The initial laws I helped write have become increasingly draconian, yet they have not benefited our environment or the health of our citizens. Instead they suppress our economy and the right of our citizens to make an honest living. It seems to me, and to others, that this is actually the intention of those in EPA and in Congress who want to see government power expanded without regard to whether it is needed to protect the environment or public health."

Eliminating the EPA would provide a major savings by eliminating 80% of its budget. The remaining 20% could be used to run its research labs and administer the Committee of the Whole of the 50 state environmental agencies. "The Committee would determine which regulations are actually mandated in law by Congress and which were established by EPA without congressional approval."

Dr. Lehr estimates the EPA's federal budget would be reduced from $8.2 billion to $2 billion. Staffing would be reduced from more than 15,000 to 300 and that staff would serve in a new national EPA headquarters he recommends be "located centrally in Topeka, Kansas, to allow the closest contact with the individual states." The staff would consist of six delegate-employees from each of the 50 states."

"Most states," says Dr. Lehr, "will enthusiastically embrace this plan, as their opposition to EPA's 'regulatory train wreck' grows and since it gives them the autonomy and authority they were promised when EPA was first created and the funding to carry it out."

The EPA was a good idea when it was created, the nation's air and water needed to be cleaned, but they have been at this point. Since then, the utterly bogus "global warming," now called "climate change," has been used to justify a torrent of EPA regulations. The science the EPA cites as justification is equally tainted and often kept secret from the public.

"It's time for the national EPA to go," says Dr. Lehr and I most emphatically agree. "All that is missing is the political will."