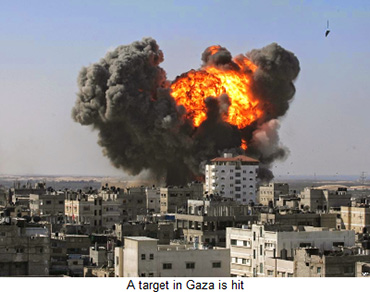 On Sunday, July 27, Eleanor Cliff, a member of The McLaughlin Group panel, referred to Israel's "disproportionate" response to the thousands of rockets and missiles that Hamas has been firing at its citizens for months, if not years.

This is a common criticism of Israel, but it is far easier to make if you are living safely somewhere other than Israel and not being awakened by alarm sirens at 5 A.M. with just a little time to make it to a bomb shelter.

Ms. Cliff was hardly alone. In Great Britain, the Deputy Prime Minister, Nick Clegg, in contrast to Prime Minister David Cameron, also declared Israel's response to Hamas as a "disproportionate form of collective punishment" on the citizens of Gaza.

On July 26 The Times of Israel reported that "Thousands of pro-Palestinian protesters marched in London and Paris on Saturday, calling out against Israel's military operation in the Hamas-controlled Palestinian enclave.

In London, the second Saturday in a row, the protest was estimated to have drawn more than 10,000 participants. "Demonstrators held placards reading 'Stop Israeli State Terror.' 'Freedom for Palestine' and 'Gaza – End the Siege.' They also chanted 'Shame on you David Cameron' as they filed past the British prime minister's Downing Street office." By contrast, Paris cracked down on pro-Palestinian demonstrations and, along with Germany and Italy, denounced expressions of anti-Semitism.

No doubt the expressions of support were welcome in Israel, but when it strikes back against its enemies it tends to run out of friends rather swiftly. In Scandinavia, Denmark, Finland and Norway backed the Palestinians but the European Union did condemn the rocket attacks by Hamas, as well as its use of human shields.

Departing from President Obama's pro-forma statement on Israel's right to defend itself, South American nations condemned Israel in tune with their general acceptance of the view that Israel is an aggressor and occupier despite the fact that in relinquished control of Gaza to the Palestinians in 2005. Joining in the chorus of condemnations were Argentina, Bolivia, Brazil, Chile, Ecuador, Uruguay, and Venezuela.

The hypocrisy of those who raise the issue of "proportionate response" is breathtaking.

Consider Israel's history. In 1948 prior to and following its declaration of independence, Israel fought several Arab armies. In 1949 armistice agreements established lines between Israel and its neighbors. In the 1950s and 60s the Israelis had to respond to constant Fedayeen – Arab guerillas – incursions from Syria, Egypt, and Jordan. In June 1967 Israel fought the Six-Day War with Egypt, Jordan, and Syria, with troops contributed by Iraq, Saudi Arabia, Kuwait and Algeria. When it was over, Israel had increased its landmass and are now called "occupiers" for having defended itself and won!

From 1967 to 1970, Israel fought a war of attrition as the Egyptians, aided by Jordan, Syria, and the Palestinian Liberation Organization, sought to recapture the Sinai. In October 1973, the Israelis fought the Yom Kippur War against Egypt and Syria. It began with a surprise attack on one of the holiest days of the Jewish calendar.

Are you getting tired of reading about the many wars waged against Israel?

One might assume that after being continually defeated, the Arabs would conclude that peace is a good option, but that is not the mentality that Israelis have been dealing with for the past 66 years and earlier when the first Zionists moved there to escape the anti-Semitism they encountered in Europe.

One might also assume that, if Canada and Mexico had been making war and firing rockets and missiles into the U.S. for that amount of time, we might conclude that a "proportional" response did not work very well.

Israel's leaders initially embraced a policy of strategic deterrence in which disproportionate force was utilized to reduce the potential for further attacks. This was the policy between 1948 and 1993. After it signed the Oslo Accords in 1993, its leaders shifted to a policy of restraint, but it didn't work. In the Middle East restraint is interpreted as weakness. Between September 1993 and September 1998, terrorists based in the West Bank or Gaza struck Israel more than ninety times, killing 279 Israelis.

In 2005 then-Prime Minister Ariel Sharon struck upon a bold plan to provide the Palestinians with territory of its own adjacent to Israel. He ordered some eight thousand or more Israelis out of the Gaza Strip and turned it over to the Palestinian Authority, Fatah.

Not long after, Hamas was elected the ruling party in Gaza and drove out Fatah. A proxy of Iran, Fatah began to receive missiles and build miles of tunnels on both its Israeli and Egyptian borders, the former to attack Israel and the latter to smuggle weapons and other items. Now both Israel and Egypt are destroying those tunnels.

They regard not just Gaza, Judea and Samaria but all of Israel as 'occupied Palestine.' Even those Palestinians who purport to accept the 'two-state solution' see it as a way-station on the march to a one-state solution in which the Jewish state eventually ceases to be. Palestinians chose Hamas precisely because Hamas was seen as more dedicated than Fatah to the achievement of that goal-not to mention, more brutally competent."

Those who talk of Israel's "disproportionate" response to Hamas, in the context of its long history of having been under attack by neighboring nations and the so-called Palestinians, sound like the babbling idiots that they are.

The Israelis want peace. The only way they will obtain it is to make waging war against them too painful to sustain.