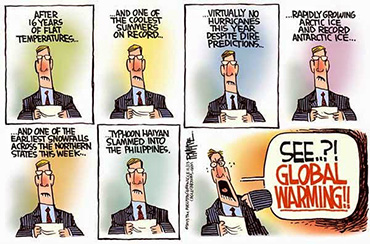 In a desperate effort to keep the global warming hoax alive even though it is now called "climate change," the meteorologically challenged print and broadcast media is now declaring all weather "extreme" these days.

As Sean Long reported, "during that time, extreme weather was frequently used by the networks to describe heat waves, droughts, tornadoes, hurricanes, and winter storms, and they often included the phrase in onscreen graphics or chyrons during weather stories."

Thanks to Al Gore who continues to lie about global warming despite the fact that the Earth has been in a cooling cycle for seventeen years, the news media, print and broadcast, now substitutes its latest reincarnation, "climate change," when reporting the weather. It's worth noting that the weather is what is outside right now wherever you are and climate is something that is measured in decades and centuries.

The one thing you need to keep in mind is that every form of weather has been around for much of the Earth's 4.5 billion years. Long before humans were blamed for causing it, they developed ways to adapt and survive, but tornadoes, hurricanes and floods, among other events, still kill humans with the same indifference to them that Mother Nature has always demonstrated.

Gore became a multi-millionaire based on the global warming scam and, along the way; the U.S. wasted an estimated $50 billion on alleged "research" whose sole purpose was to give credence to it. Too many scientists lined their pockets with taxpayer dollars and many government agencies increased their budgets while falsifying their findings.

The entertainment media got into the act by producing films such as Showtime's "documentary series" called "Years of Living Dangerously." It has received two nominations for "Outstanding Documentary or Nonfiction Series and Outstanding Writing for Nonfiction Programming." Its executive producer, Joel Bach, said "Every day, more Americans are experiencing the devastating impacts of a warming world and we had to tell their story." Except that the world is NOT warming.

The Showtime series featured those noted climatologists and meteorologists, Harrison Ford, Jessica Alba, Arnold Schwarzenegger, and Matt Damon among others. The final episode featured President Obama whose climate lies rival Al Gore's. "Science is science," said the President. "And there is no doubt that if we burned all the fossil fuel that's in the ground right now, that the planet's going to get too hot and the consequences could be dire."

The real dire consequences people around the world are encountering include frostbite and freezing to death.

In a June article in Forbes magazine, James Taylor, editor of The Heartland Institute's Environmental & Climate News, noted that "The National Oceanic and Atmospheric Administration's most accurate, up-to-date temperature data confirm the United States has been cooling for at least a decade. The NOAA temperature data are driving a stake through the heart of alarmists claiming accelerating global warming." The latest data support the longer cooling cycle that began around 1997.

The Union of Concerned Scientists (UCS) recently announced that "The growing consequences of climate change are putting many of the country's most iconic and historic sites at risk," citing Ellis Island, the Everglades, Cape Canaveral and California's Cesar Chavez National Monument. The UCS said that "we must work to minimize these risks in the future by reducing the carbon emissions that are causing climate change..." This is utter rubbish.

Called a "pollutant" by the Environmental Protection Agency, carbon dioxide is, along with oxygen, a natural gas that is vital to all life on Earth as the "food" on which all vegetation depends.

William Happer, the Cyrus Fogg Bracket Professor of Physics at Princeton University, told the U.S. Senate Environment and Public Works Committee that "Our exhaled breath contains about 4% CO2. That is 40,000 parts per million or about 100 times the current atmospheric concentration. Our own primate ancestors evolved when the levels of atmospheric CO2 were about 1000 parts per million, a level that we will probably not reach by burning fossil fuels, and far above our current level of about 380 parts per million."

The Earth would benefit from more, not less, CO2.

How concerned is the public? Not very. In May, a Gallup poll noted that Americans consider unemployment/jobs, government corruption, and the economy as the three "most important" problems facing the nation. "Just 3% of those surveyed listed the environment/pollution as America's most important problem. From a list of thirteen problems, it was number twelve.

The news media will continue to misrepresent the weather and/or climate and those determined to keep us from accessing and using the USA's vast reserves of coal, oil and natural gas will continue to lie about it. The good news is that a growing portion of the public no longer believes the three decades of lies.