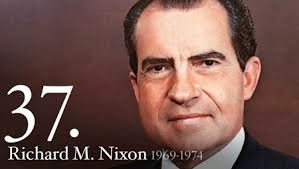 Forty years ago, on August 9, 1974, Richard Nixon resigned the office of President  the first and only President to do so.

I was just into my thirties in 1968, the year Richard Nixon was elected the 37th President of the United States. What I recall most of that year was the way the Chicago police, after enduring an onslaught of name-calling and insults from anti-war protesters, aggressively drove them away from their effort to disrupt the Democratic Party convention that would nominate Hubert Humphrey.

His opponent would be Nixon. George Wallace, a segregationalist, ran as an independent that year as well. I wasn't particularly interested in politics at the time. My focus was on my career, where I had transitioned from having been a journalist to positions with the New York State Housing Finance Agency and the New Jersey Institute of Technology. Looking back, I now know I should have been paying more attention because, in the end, whoever is President affects the lives of not just Americans, but others throughout the world.

Like millions of Americans, I had turned against the Vietnam War and, in a seminal way, it would influence my movement toward conservatism. For many people, Nixon was instrumental, not just in rejuvenating the Republican Party, but for giving a voice to the "silent majority" who didn't like the war in general and Lyndon Baines Johnson in particular. In 1968, LBJ announced he would not seek reelection. 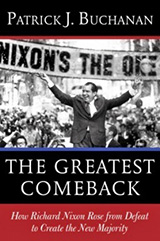 In the years since the Watergate scandal whose cover-up forced Nixon to resign in 1974, subsequent generations know him only for that historic event. Patrick J. Buchanan has done us all a favor by writing "The Greatest Comeback: How Richard Nixon Rose from Defeat to Create the New Majority" ($34.00, Crown Publishing), and it is a special treat for anyone who loves history in general and politics in particular.

As much as today's media may have loved Obama when he was nominated the Democratic Party's candidate, in Nixon's day he was loathed by them for his strong anti-communist stance when he served in the House of Representatives and Senate, and thereafter throughout the Cold War. After having been Eisenhower's Vice President for two terms, Nixon would lose to John F. Kennedy in 1960 and in a race to become the Governor of California in 1962. Few would have ever imagined that he would be elected President in 1968. In 1972, he was reelected in a landslide.

Labeled by his political enemies "Tricky Dick," Nixon was a politician of prodigious talent, but mostly he was a man who, through sheer determination overcame defeat, revived the Republican Party, and, while devoted to conservative principles, was also pragmatic enough to be open to new ideas and events. His circle of advisors shared his principles, but diverged among each other as to tactics and issues. Nixon wanted that. He would choose what advice he thought best.

Buchanan was a member of Nixon's inner circle, a writer of superb talent and one with a keen eye for the political times in which he lived and which Nixon would shape. As he notes in his book, "The years that followed that 1969 inaugural would be a time of extraordinary accomplishment. By the spring of 1973, all U.S. troops were out of Vietnam, the POWs were home, every provincial capital was in Saigon's (South Vietnam) hands."

"Nixon had negotiated SALT I and the ABM treaty, the greatest arms-limitation treaties since the Washington Naval Agreement" in 1922. Significantly, "he had ended decades of hostility between the United States and the People's Republic of China, dating to Mao's revolution and the Korean War. He had put an end to the draft, signed into law the eighteen-year-old vote, put four justices on the Supreme Court including Chief Justice Warren Burger and future chief justice William Rehnquist."

Those of us who lament Big Government must acknowledge that Nixon created the Environmental Protection Agency, the Occupational Safety and Health Administration, and on the plus side the National Cancer Institute. He would "rescue Israel from defeat in the Yom Kippur War (and) end Soviet domination of Egypt."

What I recall about the 1960s was how volatile and violent that decade was. There were riots in many of our largest cities which engendered Nixon's "law and order" message that was widely embraced. There were anti-war protests and there were assassinations that took the lives of JFK, his brother Robert, and Martin Luther King, Jr.

The greatest contrast between now and then is a general feeling of apathy that does not manifest itself in marches on Washington, D.C., anymore and a very distinct breakdown in social mores that includes the embrace of same-sex marriage and the push to legalize marijuana in some states.

The al Qaeda attack on 9/11 generated a massive intelligence program and the creation of the Department of Homeland Security. It made Americans angry enough at first to endorse the invasion of Afghanistan and later Iraq.

Later, Americans would watch the chaos the "Arab Spring" and these days the threat of the Islamic State, a self-declared caliphate that intends to control the whole of the Middle East and then destroy Israel and the U.S. The greatest threat of our times is Iran's intention to build its own nuclear weapons.