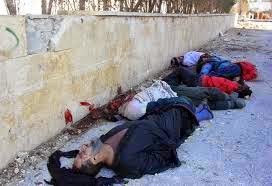 Syrian victims of Islamic State slaughter
In the last century and now this one, I have lived long enough to have been alive when the Nazis killed six million European Jews and another five million other "enemies of the state" that included unionists, homosexuals, Seventh Day Adventists, and any others that ran afoul of that hateful and hate-filled regime.

There were genocides in the last and this century. The killing of Kurds by Saddam Hussein, the Iraqi dictator who used poison gas – a weapon of mass destruction – against them is largely forgotten by everyone but the Kurds.

In the 1990s there was a genocide in Rwanda by the Tutsi tribe against the Hutu people. Hundreds of thousands were killed, most by machete. Reportedly rape, mutilation, and the deliberate spread of disease were also used against them. The final body count was estimated by some at well over a million.

In the Middle East, the Islamic Ottoman Empire whose final years were directed from what is now modern-day Turkey was responsible for the Armenian Genocide that began in 1915. The Armenians were a Christian minority and what is occurring in the land claimed by the new Islamic State (IS) reflects the same barbarity that afflicted and killed between 600,000 and 1.8 million Armenians.

In Europe following the fall of the Soviet Union and the former Yugoslavia, thousands of Bosnian Muslims and Serbs were "ethnically cleansed" between 1990 and 1995. Some twenty thousand were killed.

And now the fanatical Islamic State that stretches from areas of northern Syria through much of northern Iraq, just outside of Baghdad, is waging a systematic and utterly barbaric genocide of the area's Christians. They are killing Muslims too.

And what is the world doing? Virtually nothing.

The President of the most militarily powerful nation on Earth has dropped some "humanitarian" aid to thousands of Yazidis, an ancient, little known group driven from their homes in northern Iraq where they have lived for hundreds of years. Thousands of Christians were driven from Mosul. There has been an increase in U.S. air attacks on IS forces, but a far greater effort will be needed to destroy this evil entity. 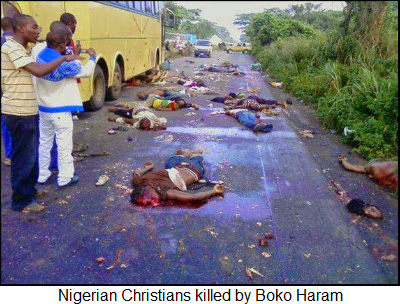 The Islamic State is now the most militarily powerful force in the Middle East and one of the most wealthy. It threatens the Kurds who have finally begun to receive weapons from the U.S.

What President Obama should be doing is orchestrating a military coalition just as George H.W. Bush did to drive Saddam Hussein out of Kuwait, but the fact is that Europe is fearful of participating because it is now home to a large population of Muslims. And it has economic problems comparable to our own.

In the Middle East, Iraq has just managed to force the former Prime Minister out of office and must now try to get all the threatened Sunnis and Shiites together to fight for its own existence. Much of the U.S. weaponry given two divisions of Iraqi military was abandoned to the IS when they fled from battle.

One might hardly expect the Iranians to get involved though they have been helping Syria's Bashar Assad with the provision of weapons. So have the Russians. The fate of the region's Christians is not likely a priority or concern of the fanatical Shiite Iranians.

There is, in fact, only one nation in the Middle East where Christians and Muslims are safe to practice their religions. It is called Israel.

I can't help thinking this would be a good time for the Pope to call for a new crusade.

The Christian genocide is continuing and will continue unless some action can be put together to destroy the Islamic State, Boko Haram, and similar groups. It is an Islamic crime against Christians and to some extent against Muslims whom they deem insufficiently devout.

Ultimately, however, it is a crime against humanity. And humanity is doing as little in response to it than occurred prior to the Holocaust and other genocides.