Alan Caruba
What "international community" is Obama talking about? 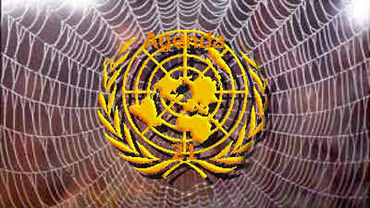 The U.S. and Iran have been adversaries since 1979 when it seized our diplomats and held them for 444 days. In the wake of the Cold War, Russia has assisted Iran develop its nuclear program and has joined its war on the Islamic State. The U.S. has joined the conflict, making Iran, Syria and Russia our allies in a world where such relationships are changing so fast it is hard to keep up with them.

A Sept 5 Debka File report regarding recent air strikes by Syria on two meetings of Islamic State officers, noted that "The twin Syrian air offensive coincided with the opening of the two-day NATO Summit...the information about the two Al Qaeda meetings at Raqqa and Abu Kamal could have come from only two sources: U.S. surveillance satellites and aircraft, or Iranian agents embedded at strategic points across Syria."

The Israeli news agency concluded that the success of the air strikes reflected "the widening military and intelligence cooperation between the United States and Iran in Iraq and Syria." So maybe there has been a bonus of sorts from the U.S. negotiations with Iran regarding its nuclear program? The other component is the fact that Iran does not want a hostile Sunni Islamic State emerging in Iraq on its borders. It is more likely this is a short-term alliance.

Meanwhile, at the NATO meeting in Wales, Secretary of State John Kerry identified what he called a "core coalition" of ten nations that could help the U.S. go after the Islamic State (ISIL) terrorists. The seven he named were Great Britain, France, Germany, Canada, Australia, Turkey, Italy, and Poland. Of these, only Turkey is Islamic. There was no mention of Iran or Syria, both of whom are playing a significant role in the fight against ISIS.

"There is no containment policy for ISIS," said Kerry. I suppose that's better than wanting the ISIS threat to be "manageable" as the President recently said at the same time he said he had "no strategy" at present to deal with ISIS. Meanwhile, on Labor Day Vice President Biden, was saying the U.S. was going to follow ISIS "to the gates of hell" to destroy them.

If there is some confusion in the minds of Americans about what the White House is actually doing or not doing, its mixed messages suggest they have as little idea as the rest of us.

A Sept 5 Rasmussen Reports poll said "Voters show even more support for continued airstrikes in Iraq against the radical Islamic group ISIS despite a second public beheading of a U.S. journalist in retaliation for those strikes. Nearly half now support sending U.S. combat troops to fight ISIS."

The President is fond of referring to "the international community" but that is essentially a meaningless phrase and has been for a very long time. Individual nations act in their own interest and if that coincides with other nations, they are allies. The result is that, over longer or shorter periods of time, the alliances change in response to various active or potential threats.

During World War II the U.S. was allied with the Soviet Union to destroy the Nazi regime but as soon as the war concluded we entered into a long Cold War until it collapsed in 1991. These days Russia represents a threat to the Ukraine and former Soviet satellite nations in Eastern Europe.

At a Sept 2 press conference by the UN Office for the Coordination of Humanitarian Affairs, (OCHA) Israel was slammed for "an unprecedented scale of destruction in Hamas" without a word about the thousands of Hamas rockets fired against Israel from Gaza. The OCHA spokesman made no mention of the estimated 200,000 dead in Syria resulting from its civil war or the persecution and slaughter of Iraqi Yazidis, Christians and other minorities. Apparently they lack the attention of those engaged in "humanitarian affairs."

The UN Relief and Works Agency (UNRWA) is home to 12,000 employees and totally devoted to just one "refugee" group, the Palestinians. As Claudia Rosett of the Foundation for Defense of Democracies noted, despite caches of rockets found in UNRWA facilities or the intent of Hamas to destroy Israel, "UNRWA has become so enmeshed in the workings of Gaza that it effectively functions as a support service for the interests of Hamas, the Palestinian terrorist organization that rules the territory."

Not to be outdone, the UN Committee on the Elimination of Racial Discrimination, on August 29, accused the United States of "racial profiling" and "the excessive use of force by the law enforcement officials against racial and ethnic minorities" mentioning the death of Michael Brown of Ferguson, MO. Among the nations represented on the Committee are Algeria, Russia, China, Pakistan, and Lebanon, nations where racial and religious discrimination thrive.

Why the U.S. continues to contribute taxpayer dollars to the United Nations defies any explanation. We can function in the diplomatic sphere without it, but it might well fail for lack of U.S. funding.

According to the Heritage Foundation, as of 2012 the U.S. "was assessed 22 percent of the regular budget, which is nearly $567 million in gross contributions...The U.S. is assessed more than 180 other U.N. member states combined and 22,000 times more than the least assessed countries. Together, the top 15 contributors pay over 81.4 percent of the U.N. regular budget. Moreover, under U.N. rules, the 129 member states that contribute less than 1.3 percent can pass the budget over the objections of the countries paying over 98 percent."

As for the NATO coalition to which John Kerry made mention none of these nations has the military capacity to destroy ISIS that the U.S. possesses. Indeed, the European members are trying to deal with the threat that Russia poses in the Ukraine and form Soviet satellite nations.

Rarely mentioned has been the failure of many NATO member nations to allocate sufficient funding to their military. Several have a serious internal Islamic threat from Muslims who are citizens. The British just announced plans to crack down on any citizen who went off to join ISIS or who may be returning from battles in Iraq or Syria.

There have been vast, complex changes occurring in the Middle East. As former Ambassador Chas Freeman noted in a 2013 speech to the National Council on U.S. Arab Relations, "The simple world of colonial and superpower rivalries is long vanished. The notion that one is either 'with us or against us' has lost all resonance in the modern Middle East. No government in the region is prepared now to entrust its future to foreigners, still less to a single foreign power."

"Americans no longer command the ability to shape trends in the Middle East," said Freeman, and "Almost no one now expects us to do so...for better or ill, the states of the region have seized control of their own destiny."

Turns out, most of them are depending on the U.S. to rid them of the Islamic State and even former adversaries like Iran are willing to work with us to achieve that objective. If recent polls are any indicator, we will be back on the Iraqi field of battle with "boots on the ground" and at least half of the population understands why and supports it.

The Islamic State, a self-declared caliphate, is the true face of Islam. It even scares Muslims.