October 8, 2014
One thing that those of us who have been longtime observers and debunkers of the lies surrounding global warming and/or climate change have noticed is that the "Warmists" have gotten increasingly desperate after more than eighteen years in which there has been no warming. 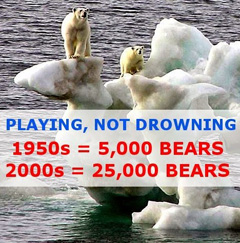 As what they call "a pause" continues, they are coming up with some of the most absurd "research" to make their case. When you consider that not one single computer model produced by the UN Intergovernmental Panel on Climate Change or any of the other charlatans was accurate, one can imagine their sense of panic at this point.

The latest claims were made by the wildlife group, WWF, the Zoological Society of London, and other affiliated groups. On October 1st, it was reported that, based on "an analysis of thousands of vertebrate species," populations had fallen 52% between 1970 and 2010. In 2012 the same group had claimed they had declined 28% over a similar period of time. So now we are expected to believe that within two years' time a massive larger decline had been detected.

The claims are absurd. I won't insult you by repeating them. Suffice to say they did not begin to cover the thousands of species that share planet Earth with humans, but you can be sure that it was humans that got blamed for the alleged declines, along with the usual recommendations that we give up the use of fossil fuels and other aspects of modern life to save some furry creature somewhere.

For years we have been hearing that polar bears have been in decline, but one of the leading authorities on this species, zoologist Dr. Susan Crockford, has a report, "Ten good reasons not to worry about polar bears", posted on the website of the Global warming Policy Foundation, led by Dr. Benny Pieser, a longtime critic of those behind the global warming hoax.

Dr. Crockford called polar bears "a conservation success story. Their numbers have rebounded remarkably since 1973 and we can say for sure that there are more polar bears now than there were 40 years ago.

Over on CFACT's Climate Depot.com website, similar claims about walruses were debunked by Dr. Crockford who noted that mass haulouts (areas where they congregate) of Pacific walrus and stampede deaths are not new, now due to low ice cover. "The attempts by WWF and others to link this event to global warming is self-serving nonsense," said Dr. Crockford,, "that has nothing to do with science...this is blatant nonsense and those who support or encourage this interpretation are misinforming the public."

"The Pacific walrus remains abundant, numbering at least 200,000 by some accounts, double the number in the 1950s."

The same time I read the article about the wildlife extinction claims, an email arrived from the Sierra Club – the kind they send to thousands who support its agenda – saying "For a mother polar bear and her cubs, the ice is already melting around them. The last thing they need to contend with is an oil spill." The claim about ice is another lie because Arctic ice has been expanding, not melting, in the same fashion as ice in the Antarctic. The real reason for the email was to protest "two massive drilling leases" and prevent access to Alaskan oil.

The Sierra Club and other environmental organizations have been on the front lines to get the Obama administration to keep the Keystone XL oil pipeline from being constructed. It has been senselessly delayed for six years despite the jobs and energy independence it will provide. One wonders if the top brass at the Sierra Club actually drive cars or do they all just bike to work?

In a similar fashion, in May the Union of Concerned Scientists announced that, thanks to climate change, our national landmarks such as Ellis Island, the Everglades, and Cape Canaveral will be endangered, claiming that face a serious and uncertain future in a world of rising sea levels, frequent wildfires, flooding and other natural events. Only the sea levels are rising in millimeters, not inches or feet. There have been fewer forest fires and far fewer hurricanes of late. In short, this is just one more desperate Green claim.

If the Greens are so concerned for wildlife, why don't they protest the wind power turbines that slaughter thousands of birds and bats, and are exempted from prohibitions on the killing of eagles and condors? Because they are hypocrites, that's why.

Species extinction, like climate change, is a normal, natural aspect of life on Earth. It has nothing to do with human activities. There were no humans around to blame for the Great Permian Extinction when 90% of all life on Earth was destroyed. Global warming periods and abundant carbon dioxide have never been causes of mass extinctions.

Craig Rucker, president of CFACT, the Committee for a Constructive Tomorrow, says the Warmists "actually want us to believe that global warming is responsible for the Ebola virus, the rise of ISIS, and for tens of thousands of walruses getting together to 'haul out' on a beach in Alaska. Attributing such things to global warming is among the most shameless tactics in the warming campaign's playbook."