Watching the events affecting the Kurds in Kobani, Syria, under attack from the Islamic State (ISIS), it occurred to me that they have much in common with Zionists, Jews who established Israel in 1948. Turkey's president Recep Tyyip Erdogan dislikes Kurds and Jews with equal fervor.

The Kurds, estimated to be some 30 million in the Middle East, are spread out between a large enclave in northern Iraq, virtually an autonomous nation, and in northern Syria, and elements of their diaspora in other Mideast nations.

The Turks have regarded them with suspicion since a group of officers led by Mustafa Kemel Ataturk established a modern, secular nation in the wake of World War I and the end of the Ottoman Empire. They dismissed the Kurdish effort to establish themselves as an independent nation and, in more recent times, they accused them of being terrorists.

This explains in part why the Turks have not provided the Kurds any protection just across their border. As for the Israelis, Erdogan allied Turkey with Hamas, the Palestinian terrorist organization, and on one occasion sanctioned an effort to break the Israeli grip on the sea lanes leading to the Gaza strip. The Israelis boarded the ship and forced its return to Turkey. Earlier they had seized a ship filled with military weapons in the same waters.

No doubt the Kurds still hold onto their dream of having their own national homeland. The areas in which they live are generally referred to as Kurdistan, but are largely now under the control of ISIS with the exception of their enclave in northern Iraq. That's because the Kurd's armed forces have proven to be the only ones capable of holding off ISIS. Their need for self-defense goes back a long time, including attacks on them by Iraq's Saddam Hussein.

Attacks on Jews in the last century can be dated back to a 1903 proclamation in Russia calling for a pogrom – an attack on them – on Easter. The Russian antipathy to the Jews included more than six hundred laws against them in the 1800s. The pogroms were part of life for Jews throughout Russian during which Jews were killed and their homes set afire.

In Kiev, one of the hundreds of towns and city areas where Jews lived and were attacked, lived a little girl, Goldie Mabovitch who would later be known the world as Golda Meir. She was one of the Zionist pioneers who settled in the southern Syrian area that would be called Palestine following WWI and the Versailles Treaty. It was a mandate under the control of Great Britain. Like many thousands of others her family had immigrated to America where they settled in Milwaukee in 1905. A few years later Golda moved to Denver to live with her sister.

At that point Golda had become immersed in a movement begun by Theodore Herzl, Zionism; the belief that Jews must reclaim and reestablish their ancient nation of Israel, based on the fact that no nation was ever going to offer them the protection and rights of other citizens. The exception to this, of course, was America. Still, Zionism was a cause to which Golda would devote her life.

She would later write, "From my earliest youth I believed in two things: one, the need for Jewish sovereignty, so that Jews – and this has become a cliché – can be master in their own fate; and two, a society based on justice and equality, without exploitation." She knew it would be a struggle.

Before moving to Palestine, she had married and she would have two children, but her family would remain secondary to her belief in the establishment of Israel. She would write "The truth is that I didn't have exact information (about conditions in Palestine), but I knew very clearly what I wanted. My mind is not so complicated. Once I accepted that there is no other solution for the Jewish problem but a home for the people, I decided to go there."

The British mandate was bordered by emerging boundaries for Egypt, Iraq, Iran, Saudi Arabia, Syria, and Jordan. At the time Winston Churchill said, "It is manifestly right that the scattered Jews should have a national center and a national home to be re-united and where else but in Palestine with which for 3,000 years they have been intimately and profoundly associated?"

The British mandate, however, imposed the same controls the Zionists were seeking to escape in Europe and in Russia. Loath to upset the Arabs and risk losing access to oil and the Suez Canal, they stood by as Arabs attacked the Jewish communities and kibbutz. Golda and her husband had joined one and her dedication and speaking skills were quickly recognized when she was selected to represent them at the first kibbutz convention in 1922.

In 1939, the Nazi regime started World War II by invading Poland. In Palestine, the Jews had organized the Histadrut as a governing body and the Haganah as an army to defend Israelis against Arab attacks. A breakaway group, the Irgun, concluded that the British must be attacked to force their withdrawal from the mandate. Their leader, Menachem Begin, would later become an Israeli Prime Minister. For the Histadrut, the most famous of the six members of leadership was David Ben Gurion and Golda Meir, both of whom would serve as Israeli Prime Ministers.

On May 14, 1948, Israel's independence was declared. Geographically it was less than one percent (1%) of the total Arab area! Their "neighbors" attacked Israel but were defeated, not in small part to the millions Golda Meir had raised from the U.S. Jewish community to purchase the arms necessary for the battles. What followed was between 500,000 and 500,000 Jews in Arab lands who were forced to flee to Israel for their lives.

Here again, the Kurds and Jews shared a common history. No nation has come to their aid when they have been under attack. Both have asked "Where is the world?" 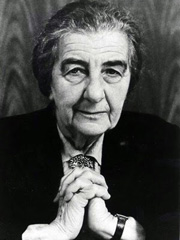 Golda Meir would serve her nation in several capacities. She was its Minister of Labor for seven years and then served as Israel's Foreign Minister. From the war for Independence in 1948, terrorist attacks throughout the 1950s, the 1956 Suez War, the 1967 Six Day War, and the 1973 Yom Kippur War the tiny nation would fight for its survival. She would serve as Prime Minister from 1969 to 1974. On December 8, 1978, she died.

The Kurds need a Golda Meir, a leader of great skills to achieve their dream of independence. Like the Israelis, they are surrounded by Arabs, along with Turks, and Iranians, all Muslims like themselves who have sought to oppress them. One can hope they will have a Kurdistan that will join the other nations of the world.