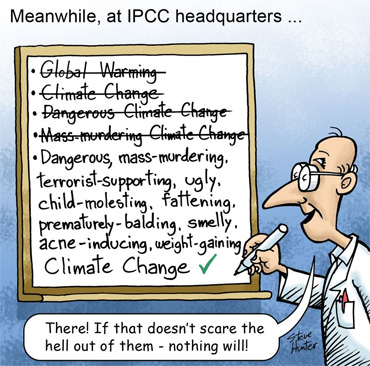 I went out for a walk today and enjoyed seeing how the autumn leaves are changing color because autumn, simply stated, is one of the four seasons that affects the Earth. It is part of the change that occurs as it has for billions of years.

The notion that humans have anything to do with autumn or the other seasons or that we should be spending billions of dollars to have any effect on the climate of the Earth is utterly insane.

On October 10, The Hill reported that "The U.S. might make a substantial contribution in November to an international fund that helps poor nations fight climate change, according to Peruvian Foreign Minister Gonzalo Gutierrez." Does anyone actually believe that any amount of money will change the climate? And yet, there is a United Nations Green Climate Fund. The UN is the locus of the climate change, formerly global warming hoax.

"So far, countries have put $2.3 billion into the fund" described as "a crucial negotiating piece for developed nations trying to woo poorer ones to the table for a global climate accord." Can you imagine how that money could be put to better use to fight the real problems of poorer nations?

"The fund was officially launched in 2013, after industrialized nations first pitched it in 2009 during the Copenhagen meeting, setting a target of $100 billion by 2020 for developing nations." The U.S. has yet to have contributed, but the U.S. is $18 trillion in debt and can ill afford to throw millions at this absurd scam.

Unfortunately, the U.S. is being led by a President who has said that climate change is the greatest challenge facing the Earth. Our Secretary of State repeats this absurdity. There is surely an agenda behind this that I have yet to have determined except to think that this President has done everything in his power to destroy the nation's economy and the claim is part of that agenda.

The climate change lies Obama keeps repeating are more than just obscene, they pose a threat to national security as he directs our military to address climate change. In a sane world, he would be removed from office.

As a recent October 1st Wall Street Journal noted, "President Obama prophesied at the United Nations last week that climate change is the 'one issue that will define the contours of this century more dramatically than any other,' and perhaps this vision of Apocalypse explains why he thinks he can disregard the law to regulate carbon."

Obama has been using the Environmental Protection Agency as his primary means of foisting the global warming/climate change hoax on the nation via a deluge of regulations to control "greenhouse gas emissions." Carbon dioxide (CO2) is the bogyman the EPA and environmentalists have been telling us is driving up the Earth temperature. Only the Earth has been in a cooling cycle for eighteen years and, at the same time, the CO2 level in the atmosphere has increased! Without any effect on the temperature!

As the Wall Street Journal opinion noted "The EPA wants to reorganize U.S. electric power generation and drive coal and eventually natural gas out of the energy mix under a rarely used backwater of the Clean Air Act called section 111(d), whose mandates apply state by state."

Now, however, thanks to an Ohio-based coal company, Murray Energy, along with a dozen states, the EPA is being sued as they seek a writ of mandamus, "a type of injunction the courts only grant when the government has taken an extraordinary action beyond its statutory authority."

The courts are beginning to reject the EPA's expansive claims of authority under the Clean Air Act. "The courts seem increasingly alarmed by abuses of executive power." That is the only line of defense between this outlaw federal agency and the rest of us. The EPA has succeeded thus far in driving coal-fired energy plants out of business, reducing the amount of electricity they have produced affordably and efficiently for the last century and ours.

If the EPA is permitted to continue the U.S. might as well just turn off the lights because we are being systematically deprived of sufficient energy. That is the Obama agenda for America.