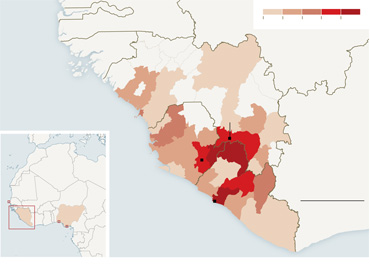 How is Ebola spread? Two ways; one, by letting anyone exposed to it in West Africa into America when they fly here and, two, by assuming that medical professionals and others who have been exposed to it would quarantine themselves from contact with others once they are here.

The latest case is Dr. Craig Spencer, an American to whom the travel ban would not apply, identified as potentially having Ebola after treating victims in Africa and who totally ignored the potential of spreading it to others as he made his way around New York on subways, went bowling, and likely had dinner at a restaurant.

Earlier a NBC news crew that had been exposed to Ebola was issued a mandatory quarantine by the New Jersey Health Department, but its chief medical editor and correspondent, Dr. Nancy Snyderman, while symptom-free, decided to break the quarantine. One of the crew, Ashoko Mokpo, did fall ill and is being treated at the Nebraska Medical Center.

What does it tell you when two medical professional behave in this manner? It tells you that even those who know they can infect others were indifferent to the risk. It tells you that airport staff armed with thermometers are no defense against anyone coming in from the Ebola hot zone in Africa.

It tells you that the failure to impose a ban on all flights from West Africa should have been imposed weeks ago.

It tells you that sending three thousand active duty soldiers and another thousand reservists into the Ebola hot zone is a senseless act that exposes them to the disease and countless others on their return unless they are all held in quarantine until no signs of the disease are detected. The risk still remains even after the twenty-one days that the Center for Disease Control cites as the time in which victims would show signs of the disease.

The two Dallas nurses who acquired the disease have been treated and one has been released. As of October 23, there were eighteen cases of Ebola in Europe and the U.S. Unlike Africa, Western nations have responded quite well to the threat.

In New York, the Mayor, Bill de Blasio, was joined by the Governor Andrew Cuomo to hold a

press conference that seemed to this observer intended to exonerate them of any charge they were not taking Dr. Spencer's foolishness lightly and to avoid public panic among a public that is clearly not panicking.

Given the continued news coverage of Ebola, it is amazing that Americans have absorbed the fundamental message that the disease has not affected those outside the healthcare community with the exception of the NBC crew and that steps have been put in place to identify and isolate those who had it. Moreover, while a deadly virus in Africa, it has been treated and cured here in America.

The real challenge will be the flu season when lots of people will show up at hospitals with flu symptoms that resemble Ebola symptoms. If you haven't been vaccinated, get one! How hospitals deal with this is going to be a real test of their judgment and skills.

I am hopeful we may be spared more press conferences that don't tell us anything more than what we already know. I surely don't want to hear President Obama tell me that everything is fine and there is nothing to worry about.