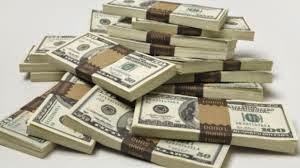 It is doubtful that most Americans and others around the world know how vast the organizational structure of the environmental movement is and how much wealth it generates for those engaged in an agenda that would drag humanity back to the Stone Age.

If that sounds extreme, consider a world without access to and use of energy or any of the technological and scientific advances that have extended and enhanced our lives, from pesticides that kill insect and rodent disease vectors to genetically modified seeds that yield greater crop volumes. 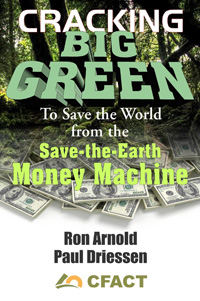 Two of my colleagues in the effort to get the truth out are Paul Driessen and Ron Arnold, both of whom are affiliated with a free market think tank, the Committee for a Constructive Tomorrow, CFACT, They have done the research necessary to expose the wealth and the power structure of the environmental movement. They have joined together to write "Cracking Big Green: To Save the World from the Save-the-Earth Money Machine." ($4.99, available from Amazon.com)

The Greens are forever claiming that anyone who disputes their lies is receiving money from big energy companies, but my experience is that it is think tanks like CFACT, small by any comparison with any major environmental organization, that support the search for the truth and its dissemination.

"Big Green" was formerly known as the Iron Triangle, "a mutually supportive relationship between power elites" so-named by Mark Tapscott, the Washington Examiner's executive editor. It consisted of "government agencies, special interest lobbying organizations, and legislators with jurisdiction over their interests." Today, it includes major environmental groups such as the Sierra Club and the Natural Resources Defense Council. To these add wealthy foundations and corporations that fund them.

It will no doubt astound many readers to learn that there are more than 26,500 American environmental groups. They collected total revenues of more than $81 billion from 2000 to 2012, according to Giving USA Institute, with only a small part of that coming from membership dues and individual contributions.

"Cracking Big Green" examined the Internal Revenue Service Form 990 reports of non-profit organizations. Driessen and Arnold discovered that, among the 2012 incomes of better-known environmental groups, the Sierra Club took in $97,757,678 and its Foundation took in $47,163,599. The Environmental Defense Fund listed $111,915,138 in earnings, the Natural Resources Defense Council took in $98,701,707 and the National Audubon Society took in $96,206,883. These four groups accounted for more than $353 million in one year.

That pays for a lot of lobbying at the state and federal level. It pays for a lot of propaganda that the Earth needs saving because of global warming or climate change. Now add in Greenpeace USA at $32,791,149, the Greenpeace Fund at $12,878,777; the National Wildlife Federation at $84,725,518; the National Parks Conservation Association at $25,782,975; and The Wilderness Society at $24,862,909. Al Gore's Alliance for Climate Protection took in $19,150,215. That's a lot of money to protect something that cannot be "protected," but small in comparison to other Green organizations.

"If that sounds too intimidating to confront," say Driessen and Arnold, "it gets worse. Our research found a truly shocking blind spot; many major environmental groups get nearly half their revenue from private foundations like the Pew Charitable Trusts, the Rockefeller Brothers Fund, and Wal-Mart's Walton Family Foundation. Just the top 50 foundation donors (out of 81,777) gave green groups $812,639,999 (2010 figures), according to the Foundation Center's vast database."

If you wonder why you have been hearing and reading endless doomsday scenarios about the warming of the Earth, the rise of the seas, and the disappearance of species and forests, for decades, the reason is that a huge propaganda machine is financed at levels that are mind boggling.

Allied with politicians in high places, Big Green can count on them to maintain the lies. When the Earth ceased to warming nineteen years ago, it changed its doomsday campaign to "climate change" but the objective is the same, keep people so scared they will accept all manner of restrictions on their lives at the same time the availability of the energy on which they depend is reduced by a "war on coal" and other measures to keep oil and natural gas in the ground where it cannot be used.

"We will respond to the threat of climate change, knowing that the failure to do so would betray our children and future generations," said President Obama on January 21, 2013, in his second inaugural address. "Some may still deny the overwhelming judgment of science, but none can avoid the devastating impact of raging fires and crippling drought and powerful storms."

This may appeal to those who do not or cannot examine these claims, but the reality is that the climate is always in a state of change, is largely determined by the Sun and other factors such as the oceans and volcanic activity. Humans play virtually no role whatever and Big Green's Big Lie, that carbon dioxide (C02) emissions influence the weather and/or the climate has long been disproved and debunked. The problem is that that the news and other media continue to tell the Big Lie.

For Big Green, science is not about irrefutable truth. It is an instrument of propaganda to be distorted to advance their lies.

The impact on their lives and on our economy can be seen in "higher energy bills, disappearing jobs, diminished family incomes, and fewer opportunities for better living standards for their children," all factors that played into the outcome of the recent midterm elections.

For a short, powerful insight to Big Green power and agenda, I heartily recommend you read "Cracking Big Green."