November 6, 2014
The Democratic Party that supported President Obama's agenda for the past six years was dramatically rejected in the midterm elections and the message for the new Republican-controlled Senate and House is to aggressively take action on stalled legislation to improve the economy and address other issues that have suffered neglect. 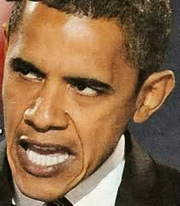 The GOP is going to be up against the revenge Obama will take on America in the remaining two years. The midterms will not generate any humility in Obama; only anger and resentment.

Republicans were not elected to "work with" Obama. They were elected to stop his agenda and actions that have been harmful to the nation. The big question coming out of this electoral mandate is whether the inside-the-beltway Republicans in Washington will do what the voters want.

Obama promised a "transformation" of America, a nation dedicated to individual freedom and liberty, and it has taken this long for many to realize that his definition of transformation was an ever-increasing Big Government to control every aspect of our lives:

# the education of our youth who lack knowledge of civics, math, and science,

# the deprivation and reduction of access to vital sources of energy,

# the refusal to protect U.S. sovereignty by ignoring our immigration laws and border security,

# the reduction of our military power to levels rivaling pre-World War Two,

# the failure to resist the growth of Islamic fanaticism,

# the historic and dangerous increase of our national debt,

# the failure to take fundamental steps to revive the economy by cutting taxes and reducing regulations,

# the destruction of our market-based healthcare system.

Obama will take the electoral rejection very personally and, as we have seen in his contempt for working with Congress and his smears of the Republican Party, no one should doubt he will use the remainder of his term in office to wreak as much damage as possible; to prove he is right and the rest of the nation is wrong.

Much of what he will do was put off until after the midterm elections because he knew the level of rejection would be even greater. Now he is free to misuse "executive orders" unless the new Congress takes steps to defund and legislatively stop them. Investigations into the scandals that have become synonymous with his administration must be vigorously pursued.

What can we anticipate?

Obama will do everything he can to leave American vulnerable to increased illegal immigration including a rumored amnesty that would provide work permits and green cards to millions who would compete with jobless natural born and naturalized Americans. He has already refused to spend funds that have been allocated to secure our borders.

When Attorney General Eric Holder exits the Department of Justice expect Obama to nominate someone even more radical and divisive.

In the next two years you can expect the Environmental Protection Agency, already producing more regulations than any other element of the government, to go into overdrive to shut down as many power plants as possible, reducing the production of electricity on which the nation depends.

Obama has done little to respond to the growing global Islamist movement, showing favor to terrorist groups such as Hamas, but his greatest effort has been to provide Iran with the approval to advance its nuclear weapons capability by opening negotiations that, if agreed to, would put it within mere months of being able to put nuclear warheads on missiles and in bombs. It would change the balance of power in the Middle East and threaten the rest of the world.

Expect Obama to try to close Guantanamo despite legislation forbidding this action. In keeping with his tilt toward Islam, he has already released five Taliban leaders in exchange for an alleged U.S. Army deserter. Others who were released rejoined the Islamic holy war.

He will, of course, do everything he can to protect his namesake legislation, the Affordable Patient Care Act otherwise known as ObamaCare. It must be dismantled before it does even more harm to the nation's healthcare system. He has waited until after the midterms for Americans to learn that their ACA premiums will rise dramatically. Ultimately, it must be repealed.

In these and many other ways, he can continue to harm our national interests. The one prediction that can be made with certainty is that he will spend even more time playing golf and indulging the many perks of the office.