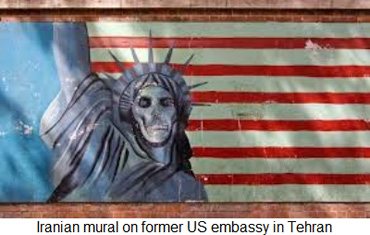 On November 4, 1979 as part of the Iranian revolution that overthrew the Shah, a group of "students" seized the U.S. embassy in Tehran and took sixty of our diplomats hostage. They held them for 444 days until the day Ronald Reagan was sworn in as President. Every year since then Iran has celebrated that date as a national holiday. What does that tell you about how its leaders really feel about America?

The negotiations with Iran regarding a nuclear program it insists is only for peaceful use were supposed to be concluded in July, but were extended to this month and, given Iran's ability to use such negotiations in the past to provide years' more time to get closer to creating nuclear warheads for its missiles, they could be extended again with any hint from them of "progress."

We have just learned that President Obama has been secretly writing to the current Supreme Leader, Ayatollah Ali Khamenei, in an effort to get his blessing for a deal. In 2012, Khamenei called for the death of all Jews and the destruction of Israel. On a website called Alef, he said that the opportunity must not be lost to remove "this corrupting material. It is a 'jurisprudential justification' to kill all Jews and annihilate Israel and in that the Islamic government of Iran must take the helm."

Khamanei's predecessor, Ayatollah Ruhollah Khomeini, called America "the great Satan" and expressed the belief that "If one permits an infidel to continue in his role as a corrupter of the earth, his moral suffering will be all the worse. If one kills the infidel and this stops him from perpetrating his misdeeds, his death will be a blessing to him." This insane justification of genocide is being ignored by President Obama who, unless he is a Muslim, should be troubled by such fanaticism.

The first rule of survival is not to negotiate with people who have expressed their intention to kill you. Obama has put the security of America, Israel, and all other nations at risk.

What is curious is Obama's obsession with Iran that goes back to the earliest months of his first term. In May 2009, he was eager to "begin discussions soon" and believed that "we should have a fairly good sense by the end of the year as to whether they are moving in the right direction." They have been moving in the wrong direction since 1979. On October 1, 2009, Obama said, "Our patience is not unlimited." It is now 2014 and he has been secretly writing Ayatollah Khamanei.

For six years Obama has been proclaiming that negotiations will yield a result that everyone else knows cannot be achieved. Iran's nuclear program is not peaceful.

The Foundation for Defense of Democracies publishes an "Iran Press Review" in which it reports on what Iranian ayatollahs and political leaders are saying. The most recent report on November 8 included remarks by Ayatollah Ahmad Khatami who said, "Even if the nuclear issue is resolved, the hatred of arrogance (by the United States) will not leave the souls of the people of Iran and the screams of death to America of the Iranian people is loud."

The good news is that the leaders of a Republican Congress that takes power in January have made it clear that they will not permit Obama to sign off on a bad deal with Iran.

In a June edition of The Washington Times, Clifford D. May of the Foundation for the Defense of Democracies wrote that the current Supreme Leader and other Iranian politicians and its military "are convinced that the U.S. government is as feckless and self-deluding today as it was" when Khomenei derided its failure to take strong action to secure the return of its diplomats. "When the threat of force is credible," said May, "the use of force often becomes unnecessary."

Why would Ayatollah Khomenei or any other leader of the global jihad believe they have anything to fear from President Obama?

Current events bear this out. The President who got elected by promising to remove all of our troops from Iraq and leave a small remnant in Afghanistan has gone to Congress with a request to fund 1,500 more troops be sent to Iraq as "advisors." Claiming they will not engage in ground combat with the Islamic State is delusional and deceptive.

Daniel Pipes of the Middle East Forum, writing in November of last year, pointed out that "the American goal for the accord was that Iranians not 'advance their program' of building a uranium nuclear bomb (and perhaps a plutonium bomb too); the apparent deal exactly permits such advancement, plus sanctions relief to Tehran worth about US $9 billion."

"This wretched deal," wrote Dr. Pipes "offers one occasion when comparison with Neville Chamberlain in Munich in 1938 is valid. An overeager Western government, blind to the evil cunning of the regime it so much wants to work with, appeases it with concessions that will come back to haunt it. Geneva and Nov. 24 will be remembered along with Munich and Sep 29."

On November 8, the Associated Press reported that a confidential report by the International Atomic Energy Agency, concluded that "Iran has not provided any explanations that enable the agency to clarify the outstanding practical measures" to conclude that its nuclear weapons program is not moving ahead.

Obama keeps moving the U.S. and its negotiation partners toward a world in which Iran will announce they have nuclear weapons. Ignoring history and all the reports that confirm Iran's intentions, he is putting the world at the greatest risk it has ever faced.

Obama's obsession with an Iranian "deal" and his domestic and foreign policy decisions reveal a man who has been judged by the voters to be unfit, mentally and intellectually, to be President.