Alan Caruba
Praying or not on the Temple Mount 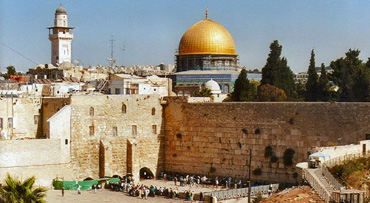 The Palestinians never lose an opportunity or excuse to kill Jews. What is feared is a new intifada or holy war in Israel, specifically in Jerusalem, where attacks on its civilians and soldiers have been occurring. The present grievance has to do with the Temple Mount, the holiest place in Judaism, but one that was taken over by Muslims when they invaded in 638 A.D.

Muslims have a habit of either destroying the places of worship of Jews and Christians or converting them to mosques. In the case of the Temple Mount, known to Arabs as Masjid al Aksa, the Umayyad Caliph Abd al-Malik, around 688 A.D., built the Dome of the Rock, a mosque. The site, Mount Moriah, had been holy to Jews for 3,000 years as the place where Abraham offered his son, Isaac, as a sacrifice when his faith was tested by God.

As recorded in 2 Chronicles 3:1 "Then Solomon began to build the Temple of the Lord in Jerusalem on Mount Moriah. It was on the threshing floor of Araunah the Jebusite, the place provided by David, his father."

And then Mohammad came along with a fanciful story. As recorded in the Koran, Sura Al-Isra 17:1. "Glory be to Him who did take His servant for a Journey by night from the Sacred Sanctuary to the farthest Sanctuary, whose precincts We did bless..." According to Mohammed, one night he was transported from Mecca to Jerusalem, escorted by the angel Gabriel. From the future site of al-Aksa, he ascended to Heaven where he met the great prophets before returning to Mecca. Suffice to say the "Night journey" became a sacred event for Muslims and al-Aksa, when built, a sacred mosque.

Apparently anything in Islam is justification enough to kill any "unbeliever" and Jews have been on the top of that list since it was created by Mohammed, largely because the Jews of his time refused to abandon their faith and accept him as a prophet.

When Israel became a sovereign Jewish state in 1948, it was immediately attacked by its Arab neighbors and has had to fight several wars since then. It has never been free from attacks, the latest being those by Hamas from Gaza that provoked a military operation to stop their ceaseless rocketing.

In the wake of the first war the Jordanians retained control over the Mount Moriah, refusing entry to the area. The Israelis conquered the whole of Jerusalem during the 1967 Six Day War and liberated the Temple Mount. It was the first time since the destruction of the Second Temple by the Romans that they had control.

Currently, the Israelis allow Jews to enter the Temple Mount on a restrictive basis, but they are barred from praying there!

Prayer is forbidden because the Israelis have not wanted to offend Muslims. Meanwhile the Palestine Authority president, Mahmoud Abbas, has accused Israel of launching a religious war when Israelis responded to attacks by Palestinians on their civilians and soldiers as a way to celebrate the tenth anniversary of Yasser Arafat's death. Abbas has had years in which to find a way toward peace with Israel, but never has.

Access to the Temple Mount has been a topic of discussion among Israelis for whom the site is as holy as that of the Muslims. Attacks on Jewish activists and others have increased, reflecting the Muslim resistance to any policy of tolerance that might permit Jews to pray there. Prime Minister Benjamin Netanyahu is on record that Israel will not change its policy, but prominent Israeli political figures have made trips to the plaza of the Temple Mount to protest the regulation.

For all those in the West who speak of the necessity to extend tolerance to Islam and try to accommodate the demands of Muslims, it would be wise to look at what is happening in Israel, a holy land for three thousand years to Jews, then for two thousand years to Christians, and then to Muslims who arrived on the scene 1,400 years ago and who are engaged in a holy war to dominate the whole of the world.

These days, when not fighting each other throughout the Middle East, Muslims are committing atrocities around the world, killing innocent people with abandon in the name of their holy war and while they do Jews and Christians are forbidden to pray on the Temple Mount.