Alan Caruba
Palestinians are running out of friends again 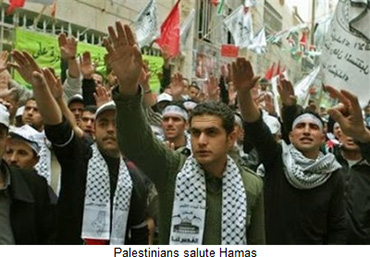 The news of the day is former President Jimmy Carter who placed the blame for the Paris jihadist massacre on – you guessed it – Israel. That reflects the surreal world in which anti-Semites live.

Meanwhile, the Palestinians, both Fatah and Hamas, are running out of friends. For reasons that defy any logic and which have no basis in fact, Palestinian Authority President Mahmoud Abbas is seeking recognition of the Palestinian state from the United Nations. He's also applied for membership in the International Criminal Court.

The Palestinians who have refused every opportunity to become an independent state when it was offered by the UN or Israel now insist that they should be recognized as one. The problem is that they have never functioned as a state.

For example, who founded it? Answer, no one. It has no founder unless one regards Yassir Arafat as one, but Arafat ran Palestine entirely by himself. Then there's the question of its borders. Where are they? You can find Israel's on a map, but they do not exist for Palestine. What is the capital city of Palestine? It has none. It doesn't have its own currency.

There is no Palestinian state.

What exists are people who are identified as Palestinians by other Arab nations who have used them as pawns since they lost their wars with Israel. Instead, they reside in "refugee" camps from the days of Israel's independence in 1948 or in areas the Israelis have designated in the West Bank and Gaza. Last year, after Hamas had shelled Israel with rockets for months, the residents of Gaza had to pay a high price when the Israelis finally retaliated.

The Palestinians and their supporters call it a war crime when the Israelis defend themselves.

Abbas insists that they be allowed to "return" to a Palestine that was never a nation-state, but rather a name applied to the area that has for more than 3,000 years been called Israel. At this point, two generations after Israel's independence, few "Palestinians" have ever lived in Israel and the Arabs that do live there enjoy full rights as Israeli citizens and have no wish to be anything other than Israelis.

As noted by the Middle East Forum, "Under the 1994 Paris Protocol, adopted as one of the Oslo Accords, Israel collects customs taxes on good shipped to the Palestinian areas, the Value Added Tax for goods and services sold in Israel and intended for PA consumption, and petroleum excises, and well as small amounts of income tax from PA residents working in Israel. Under these clearance revenues are transferred monthly directly from Israel to the PA Finance Ministry, and they are the PA's largest source of funds."

Israel has cut off these funds eight times in the past, usually in response to terrorist activity in the West Bank and Gaza or to protest Palestinian diplomatic efforts such as its current effort at the UN. On January 2, 2015, Israel decided to once again withhold the funds in response to the PA's hostile activity at the International Criminal Court where it wants to have Israel tried for what it calls "war crimes" and the rest of the world calls self-defense.

In the January 5 edition of The Wall Street Journal, columnist Bret Stephens who had spent some years working in Jerusalem and had the opportunity to see Abbas up close, wrote of his "serial fiascos over the decade, culminating in his failed bid last week to force a vote in the Security Council over Palestinian statehood."

Stephens noted that "In 2005, Israel withdrew from the Gaza Strip, leaving Mr. Abbas in charge and giving him a chance to make something of the territory. Gaza dissolved into a civil war within months. In 2008, Israel offered Mr. Abbas a state covering 94% of the West Bank, along with a compensatory 6% of Israeli territory and a land bridge to Gaza. Mr. Abbas never took up the offer."

Indeed, neither Arafat nor his successor, Abbas, has ever taken up any offer of statehood, so why now? Stephens says that, from the point of view of Abbas, "such a state is infinitely more trivial than a Palestinian struggle. Becoming is better than being. So long as 'Palestine' is in the process of becoming, it matters. Once it exists, it all but doesn't."

On January 6, Sen. Rand Paul (R-KY) introduced a bill that would withhold U.S. aid to the Palestinians until their leadership withdraws its controversial bid to join the International Criminal Court. The bill would freeze $400 million in aid that is annually sent to the Palestinian Authority that includes Hamas, a terrorist organization, at this point.

In 2011, David B. Rivkin Jr and Lee A Casey, lawyers who had served in the Reagan and George H.W. Bush administrations, spelled out why this latest effort to get the UN to declare Palestine a state is invalid. "The Palestinian Authority, by contrast, does not meet the basic characteristics of a state necessary for such recognition. These requirements have been refined through centuries of custom and practice, and were authoritatively articulated in the 1933 Montevideo Convention on the Rights and Duties of States."

"As that treaty provides, to be a state an entity must have (1) a permanent population, (2) a defined territory, (3) a government, and (4) the capacity to enter into relations with other states." The Palestinian Authority does not meet any of those requirements since it is, essentially, Abbas and his staff. Abbas, who was elected to a four-year term is now in his tenth year in office without the bother of calling any other elections.

Even if a UN vote were taken, the United States would veto it in the Security Council. So all of this is just one more bizarre and stupid charade that Abbas and the Palestinians engage in from time to time.