Alan Caruba
Friends of the earth are the enemies of mankind 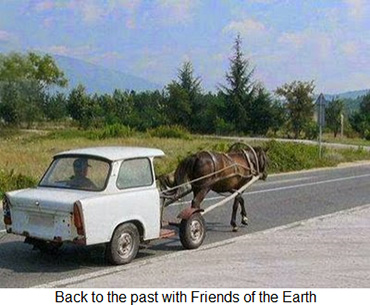 It's such a benign sounding name, Friends of the Earth. This multi-million dollar international organization is a network of environmental organizations in 74 countries. If its agenda was adopted and enacted, much of mankind would lose access to the energy sources that define and enhance modernity or the beneficial chemicals that protect food crops from insect predators and weeds.

I am on FOE's mailing list, and the most recent email informed me and the thousands of others who received it that "the oil lobby and the Republican leadership in Congress are plotting a full frontal assault on our environmental protections...." I bet you didn't know that the Republican Party was an enemy of the environment. That's curious because it was a Republican, Richard M. Nixon, who created the Environmental Protection Agency with an executive order!

FOE was upset by the $1.01 trillion bill to fund the U.S. government for the coming year through to September. "What's more, in a surprise giveaway to the super-rich, the bill raised the maximum contribution limit from individuals to political parties – opening the door for billionaires like the Koch Brothers to purchase even more seats in government."

The sheer hypocrisy of FOE defies the imagination. No mention was made of the secretive "billionaires club" that was revealed in August in a report by Republicans on the Senate Environment and Public Works Committee. It was titled "The Chain of Environmental Command: How a Club of Billionaires and Their Foundations Control the Environmental Movement and Obama's EPA." Didn't read about it in the mainstream press? That's because it was hushed up.

You may, however, have heard of San Francisco billionaire Tom Steyer, who in February pledged to spend up to $100 million, half his own money and half from other billionaire donors, to get candidates who promised to pass anti-global warming legislation elected in the midterm elections. Steyer has been a leading opponent of the Keystone XL pipeline, but for sheer hypocrisy, Steyer made his fortune by investing in fossil fuel companies!

As far as FOE is concerned, only conservative billionaires are evil.

"At Friends of the Earth, we're working to protect people and the planet from Big Oil and its profits." Translation: We don't want oil companies to provide the source of energy that fuels our cars, trucks, and other devices that improve our lives. We don't like profits because they are the result of capitalism."

For good measure, FOE tells its supporters the "future would be great for companies like Dow, Syngenta, and Monsanto – but terrible for bees, butterflies, and people like us." Take away pesticides and all you have left are the pest insects that spread disease and harm food crops.

According to Wikipedia, "Originally based largely in North America and Europe, its membership is now heavily weighted toward groups in the developing world." It's the developing world that has been the focus of the United Nations' greatest hoax, global warming, now called climate change, as a means to transfer money from wealthy nations to those less well governed, often because there is a despot or larcenous group in charge.

It is little wonder that FOE is upset by the decision of millions of American voters to elect candidates who want to rein in the excesses of the Environmental Protection Agency and take steps to improve the economy. Senate Majority Leader Mitch McConnell (R-KY) is denounced as "a climate denier with close ties to the coal industry." He has made it clear that getting the Keystone XL pipeline approved by Congress will be a priority.

FOE's email even named the American Legislative Exchange Council (ALEC) as "a policy group that helps develop anti-environmental state laws across the country. Right now they're focused on plans to erode the President's Clean Power Plan and EPA's ability to carry out its mission."

What FOE's email decrying Big Oil and Republicans doesn't mention is that, among the elements of the 1,603 pages of the omnibus appropriations bill, is a reduction in the funding of the Environmental Protection Agency, which received $60 million less than last year. At $8.1 billion, the EPA is operating on its smallest budget since 1989.

I would like to see the EPA eliminated as a federal agency and that funding go as grants to the individual state environmental protection agencies to address problems closer to those responsible to do so. As it was, the omnibus bill put a variety of limits on EPA "greenhouse gas" programs, some of which verge on the totally idiotic, such as permits for gas emissions – methane from cows!

The bill also disallowed President Obama's promise to give $3 billion to the United Nations Climate Fund, a means to take our money and give it to nations for "environmental" programs that are more likely to end up being something else entirely.

With its anti-energy, anti-capitalism agenda, Friends of the Earth are in fact enemies of mankind. They would happily return the planet to the Dark Ages. That's why people like me shine a very bright light on them so you will not be duped in the way far too many others are.