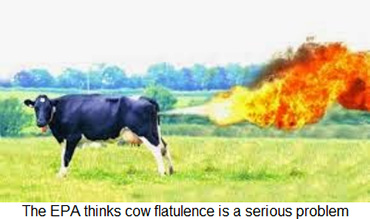 The Obama administration's attack on America's energy sector is insane. They might as well tell us what to eat. Oh, wait, Michelle Obama is doing that. Or that the Islamic State is not Islamic. Oh, wait, Barack Obama said that.

Or that the Environmental Protection Agency (EPA) is about protecting the environment. It used to be decades ago, but not these days.

There was a time when the EPA was devoted to cleaning up the nation's air and water. It did a very good job and we now all breathe cleaner air and have cleaner water. At some point, though, it went from a science-based government agency to one for which science is whatever they say it is and its agenda is the single minded reduction of all sources of energy, coal, oil and natural gas, by telling huge lies, citing junk science, and generating a torrent of regulation.

Americans have been so blitzed with global warming and climate change propaganda for so long one can understand why many just assume that these pose a hazard even though there hasn't been any warming for 19 years and climate change is something that has been going on for 4.5 billion years. When the EPA says that it's protecting everyone's health, one can understand why that is an assumption many automatically accept.

The problem is that the so-called "science" behind virtually all of the EPA pronouncements and regulations cannot even be accessed by the public that paid for it. The problem is so bad that, in November 2014, Rep. David Schweikert (R-AZ) introduced a bill, HR 4012, the Secret Science Reform Act, to address it. It would force the EPA to disclose all scientific and technical information before proposing or finalizing any regulation.

As often as not, those conducting taxpayer funded science studies refuse to release the raw data they obtained and the methods they used to interpret it. Moreover, agency "science" isn't always about empirical data collection, but as Ron Arnold of the Center for the Defense of Free Enterprise, noted in 2013, it is "a 'literature search' with researchers in a library selecting papers and reports by others that merely summarize results and give opinions of the actual scientists. These agency researchers never even see the underlying data, much less collect it in the field."

The syndicated columnist, Larry Bell, recently noted that "Such misleading and downright deceptive practices openly violate the Information Quality Act, Executive Order 12688, and related Office of Management and Budget guidelines requiring that regulatory agencies provide for full, independent, peer review of all 'influential scientific information.'" It isn't that there are laws to protect us from the use of junk science. It's more like they are not enforced.

These days the EPA is on a tear to regulate mercury and methane. It claims that its mercury air and toxics rule would produce $53 billion to $140 billion in annual health and environmental benefits. That is so absurd it defies the imagination. It is based on the EPA's estimated benefits from reducing particulates that are – wait for it – already covered by existing regulations!

Regarding the methane reduction crusade the EPA has launched, Thomas Pyle, president of the Institute for Energy Research, says "EPA's methane regulation is redundant, costly, and unnecessary. Energy producers are already reducing methane emissions because methane is a valuable commodity. It would be like issue regulations forcing ice cream makers to spill less ice cream."

"The Obama administration's latest attack on American energy," said Pyle, "reaffirms that their agenda is not about the climate at all – it's about driving up the cost of producing and using natural gas, oil, and coal in America. The proof is the EPA's own research on methane which shows that this rule will have no discernible impact on the climate."

As Larry Bell noted, even by the EPA's own calculations and estimates, the methane emissions limits, along with other limits on so called greenhouse gases "will prevent less than two-hundredths of a degree Celsius of warming by the end of this century."

That's a high price to pay for the loss of countless plants that generate the electricity on which the entire nation depends for its existence. That is where the EPA is taking us.

Nothing the government does can have any effect on the climate. You don't need a PhD in meteorology or climatology to know that.