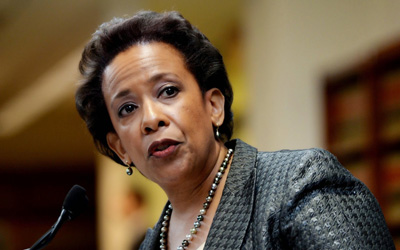 The Wednesday hearings on the confirmation of a new Attorney General, Loretta Lynch, lasted hours because members of the Senate Judiciary Committee were often called away to vote. In the wake of the scandals surrounding the manner in which Eric Holder's Department of Justice has functioned, the hearing, led now by Republicans, could have been harsh, but it was not. The Wall Street Journal characterized the mood in the hearing room as "cordial." Watching it on CSPAN, I can confirm that.

In early November the Wall Street Journal, in an opinion titled "The Next Attorney General: One area to question Loretta Lynch is civil asset forfeiture", it noted that "As a prosecutor Ms. Lynch had also been aggressive in pursuing civil asset forfeiture, which has become a form of politicking for profit."

"She recently announced that her office had collected more than $904 million in criminal and civil actions in fiscal 2013, according to the Brooklyn Daily Eagle. Liberals and conservatives have begun to question forfeiture as an abuse of due process that can punish the innocent."

That caught my eye because the last thing America needs is an Attorney General who wants to use this abuse of the right to be judged innocent until proven guilty. Civil forfeiture puts no limits on the seizure of anyone's private property and financial holdings. It is a law that permits this to occur even if based on little more than conjecture. It struck me then and now as a bizarre and distinctly un-American law.

Writing in the Huffington Post in late 2014, Bob Barr, a former Congressman and the principal in Liberty Strategies, told of the passage of the Civil Asset Forfeiture Reform Act (CAFRA) in 2000 "as a milestone in the difficult – almost impossible – task of protecting individual rights against constant incursions by law-and-order officials." The problem is that civil forfeiture was and is being used to seize millions.

"The staggering dollar amounts reflected in these statistics, however," wrote Barr, "does not pinpoint the real problem of how law enforcement agencies at all levels of government employ the power of asset forfeiture as a means of harming, and in many instances, destroying the livelihood of individuals and small businesses."

"In pursuing civil assets, the government need never charge the individuals with violations of criminal laws; therefore never having to prove beyond a reasonable doubt that they are guilty of having committed any crimes."

As noted above, as the U.S. Attorney for the Eastern District of New York, Ms. Lynch's office had raked in millions from civil forfeiture. Forbes magazine reports that she has used it in more than 120 cases and, prior to the hearing to confirm her as the next Attorney General US News & World Report noted on January 26 that Ms. Lynch's office had quietly dropped a $450,000 civil forfeiture case a week before the hearings. She clearly did not want to answer questions on this or any other comparable case.

Just one example tells you why there is legitimate concern regarding this issue and it appeared in a January 3rd edition of Townhall.com. I recommend you read the account written by Amy Herrig, the vice president of Gas Pipe, Inc, a Texas company that an editor's note reported as "faced with extinction of a civil asset forfeiture to the federal government of more than $16 million. Neither Herrig nor her father, Jerry Shults, have been charged with any criminal offense."

Jerry Shults is a classic example of an American entrepreneur. After having served in the Air Force and serving in Vietnam where he earned a Bronze Star, Shults moved to Dallas where he began selling novelty items at pop festivals throughout Texas. Since the first store that he opened had gas pipes exposed in the ceiling, he dubbed it Gas Pipe, Inc. Suffice to say his hard work paid off for him. By the late 1990s, he had seven stores, a distribution company, a five-star lodge in Alaska, and was an American success story. By 2014 the company had grown to fourteen stores and other notable properties.

By then he had been in business for nearly 45 years and employed nearly two hundred people. And then someone in the northern district of Texas, Dallas division, initiated a civil forfeiture seizure against him. I was so appalled by his daughter's description of events I secured a copy of the September 15 complaint that was filed. I am no attorney, but it looked to me as spurious as one could have imagined, except for the details of Gas Pipe's assets. On 88 single-spaced pages, those were spelled out meticulously and all were subject to seizure despite the fact that not a single instance of criminality had been proven in a court of law. Imagine having 45 years of success erased by one's own government in this fashion. It is appalling.

Assuming Ms. Lynch will be approved for confirmation as our next Attorney General, civil forfeiture is the largely hidden or unknown issue that could spell disaster for countless American businesses, large and small, in the remaining two years of the Obama administration. She has a record of pursuing it. The upside of this is that the current AG, Eric Holder, in early January announced that the DOJ would no longer acquire assets seized as part of a state law violation.

On the same day of Ms. Lynch's hearing, January 28, writing in The Hill's Congress Blog, former Representative Rick Boucher (D-VA) was joined by Bruce Mehlman, a former Assistant Secretary of Commerce in the George W. Bush administration, to raise a note of warning. "The topic of civil asset forfeiture should be an important part of the discussion with Lynch. As U.S. Attorney for the Eastern District of New York, Lynch was the top official in a hotbed of civil asset forfeiture – helping to bring in hundreds of millions of dollars under the program in recent years."

Ms. Lynch was not asked about civil forfeiture by either the Republican or Democrat members of the Senate Judiciary Committee. It was a lost opportunity and, if the new Attorney General applies her enthusiasm for it to the entire nation, it will be yet another Obama administration nightmare.