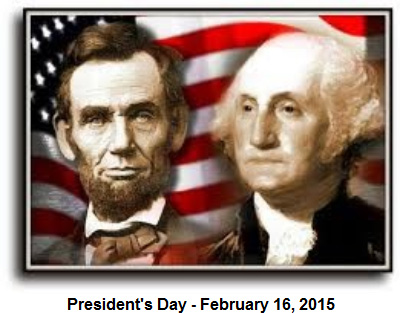 I won't be around to see it, but I have little doubt that future historians and others will conclude that President Barack Hussein Obama was the worst President ever to serve in that office.

The reason is simple enough. His decisions on domestic and foreign affairs have already demonstrated his astonishing incompetence. His major contribution may in fact be to ensure that the voters elect conservatives in the next two or more elections to come. If he is remembered for anything it well may be the emergence of the Tea Party movement whose influence has been seen over the course of two midterm elections.

One cannot help but think of such things as President's Day, February 16, reminds us of Washington and Lincoln, both of whom were born during this month. For most it is just a day on which there are a variety of sales pegged to it. For all of us, however, it acknowledges the two Presidents without whom there would not be a United States of America.

Presidents Washington, Lincoln and Franklin D. Roosevelt are routinely ranked at the top of the lists of those judged to have been of greatest service to the nation and, not incidentally, all three presided over wars that led to and maintained America's sovereignty.

When I have read about Washington's life, I am always impressed by the man and, not surprisingly, so were his contemporaries, the men he commanded over the long course of the Revolutionary War. The Americans of his time had the highest regard for him. It was Washington who set the pattern of only serving two terms. When the American artist, Benjamin West, told England's King George III of Washington's decision, the king said, "If he does that, he will be the greatest man in the world."

In his 1796 farewell address, Washington said, "Of all the dispositions and habits, which lead to political prosperity, religion and morality are indispensable supports. In vain would that man claim the tribute of patriotism, who should labor to subvert these great pillars of human happiness, these firmest props of the duties of men and citizens. The mere politician, equally with the pious man, ought to respect and to cherish them. A volume could not trace all their connections with private and public felicity."

Imagine a modern politician talking of religion and morality as the basis of political prosperity – least of all Obama who has disparaged Christianity and protects Islam.

America was particularly blessed and fortunate in its earliest years to have a succession of men who demonstrated extraordinary intelligence, courage, and moral integrity. Following Washington there was John Adams, Thomas Jefferson, James Madison, James Monroe, and John Quincy Adams. Few nations have been so blessed as ours.

One can only examine Lincoln's life with a sense of wonder as he rose from humble beginnings to the role of keeping the Union intact in the face of the secession of southern states and the horrendous war that followed. Gen. Robert E. Lee surrendered on April 9, 1865 and on April 14 Lincoln was assassinated by an actor, John Wilkes Booth. His death was the occasion of the first American national funeral as cities and towns did their best to out-do one another to honor him. It took his death for people to realize the magnitude of what he had achieved.

The advice Lincoln offered in his time is just as important, if not more so, in ours:

"You cannot help the poor by destroying the rich.

You cannot strengthen the weak by weakening the strong.

You cannot bring about prosperity by discouraging thrift.

You cannot lift the wage earner up by pulling the wage payer down.

You cannot further the brotherhood of man by inciting class hatred.

You cannot build character and courage by taking away men's initiative and independence.

You cannot help men permanently by doing for them, what they could and should do for themselves."

Franklin D. Roosevelt and, earlier, Theodore Roosevelt, are also highly ranked among the Presidents. Both men shared a zest for the job, enjoying it. Teddy regretted announcing that he would not run for a third term (which he did with the Bull Moose Party) and FDR ran and won four times! He did so during the Great Depression and World War II.

Two other families played a role in the presidency, the Adams and, in the modern era, George H.W. Bush was the 41st President and George W. Bush was the 43rd. It is popular to disparage both men, but history may come to another judgment.

President Obama has brought nothing to the presidency except his Marxist theology. He was the least prepared in terms of experience in the workplace and his elections have been more about the manipulation of public opinion and his two terms have been an endless succession of lies.

His signature legislation, ObamaCare, has undermined the nation's healthcare system. His solution to the Great Recession added more debt in his six years in office than the combined debt of every previous President up to Clinton and did not stimulate the economy as promised.

His ignorance of history and of current events is vast. Google "what does Obama know?" and you will find many articles that document this.

He has been protected by a liberal mainstream media, but the voters have seen through that and have turned political power in Congress over to the Republican Party.

One thing is for sure. On future President's Days, Obama will barely be noticed when Americans look back on those who did much to address the great issues and challenges of their times.