Alan Caruba
It's an ice age for sure 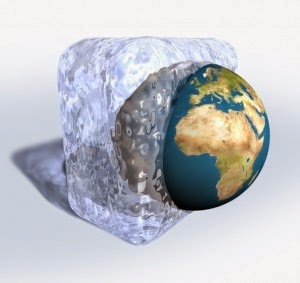 Some say in ice.
From what I've tasted of desire.
I hold with those who favor fire.
But if it had to perish twice, I think I know enough of hate.
To say that for destruction ice Is also great.
And would suffice. 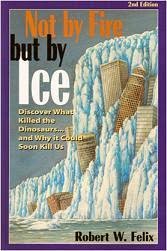 Robert W. Felix borrowed from the poet Robert Frost for the title of his book, "Not by Fire, But by Ice," first published in 1997 and devoted to the science of magnetic reversals and the Earth's ice ages. I read it first in 2010 and was absolutely floored because Felix makes a very strong case for a reversal that would lead to a widespread extinction of life at some point in the future. In the near, more predictable future, he said the Earth was heading into a new ice age.

"What would happen if a magnetic reversal occurred right here?" asked Felix. "The same things that happened in the past. Earthquakes, floods, volcanoes, giant snowstorms, rising land, plummeting sea levels – you name it – tectonic activity would go bonkers." Don't believe him? Think about the disappearance of the dinosaurs some 65.5 million years ago.

The Earth had been in a cooling cycle that began in 1996 when the sun entered a cycle of reduced radiation. Such cycles were well known and most dramatically tied to the mini-ice age that occurred between 1300 and 1850. Solar observers had noticed many centuries ago that when there were few sunspots – magnetic storms – on the surface of the Sun, the Earth got colder.

This has become especially dramatic because, on February 17 a post on http://thesiweather.com/category/climate-info/ called for a discussion of the fact that "The Sun has gone quiet again during the weakest solar cycle in more than a century." The post says, "If history is a guide, it is safe to say that weak solar activity for a prolonged period of time can have a negative impact on global temperatures in the troposphere which is the bottom-most layer of Earth's atmosphere – and where we all live."

"There have been two notable historical periods with decades-long episodes of low solar activity. The first is known as the 'Maunder Minimum,' named after solar astronomer Edward Maunder, and it lasted from 1645 to 1715. The second one is referred to as the 'Dalton Minimum,' named for the English meteorologist John Dalton and it lasted from 1780 to 1830." Together they are referred to as the "Little Ice Age."

There are quite a few scientists forecasting a new ice age. The last ice age began approximately 1.6 million years ago in the Pleistocene epoch. We are currently in the Holocene epoch that began about 11,000 years ago and is regarded as an interglacial period of general warmth. 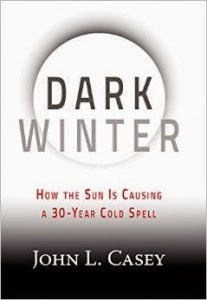 In his book, "Dark Winter: How the Sun is Causing a 30-Year Cold Spell," John L. Casey, a former White House national space policy advisor, says that whatever warming has occurred has ended as the result of "solar hibernation," a term he applies to the reduction of energy output of the Sun. The "climate change" that is occurring is a long-term reduction in the Earth's temperatures with, says Casey, "a high probability of increased earthquakes and volcanic eruptions."

In "Cold Sun," another book by Casey, his says that "The most likely outcome from this 'solar hibernation' will be widespread global loss of life and social, economic, and political disruption. You must prepare for this life-altering event now!"

In January 2012, Matt Ridley, a columnist for The Wall Street Journal, noted that "The entire 10,000-year history of civilization has happened in an unusually warm interlude in the Earth's recent history. Over the past million years, it has been as warm as this or warmer for less than 10% of the time, during 11 brief episodes known as interglacial periods."

Those who kept warning of a "global warming" with dire results misinterpreted the climate. Ridley noted that "It's striking that most inter-glacials begin with an abrupt warming, peak sharply, (and) then begin a gradual descent into cooler conditions." That is what is occurring now.

None of this has anything to do with carbon dioxide, ozone, or any other element of the Earth's atmosphere. It is entirely the result of the lower solar radiation of heat.

The United States should be taking steps to ensure a sufficient supply of electricity to cope with the lower temperatures, but has been wasting billions to support "renewable" energy, wind and solar, that is costly and ineffective. The U.S. Energy Department projects that solar power will make up 0.6 percent of total U.S. electricity generation in 2015. Wind power which is funded in part by taxpayer subsidies to stay in business has received $7.3 billion over the past seven years, but produces a minimal amount of electricity to justify its cost.

At the same time, the Environmental Protection Agency's "war on coal" has forced many plants providing electricity to close. A significant disruption of electricity over an extended period of time will cause many deaths due to the cold weather. It is inevitable.

At the same time, instead of providing a source of food, tons of corn are being turned into ethanol in the name of reducing carbon dioxide even though CO2 plays no role whatever in a "global warming" that is not happening.

It's not just another typical winter. The U.S. and much of the northern hemisphere is experiencing increased cooling that is seen in record-breaking and record-setting new amounts of snow and ice. This is a trend tied to the Sun's and the Earth's cooling cycle.

That is of no concern to those who are using "global warming" and "climate change" in order to bring about a transformation in the global economic system from capitalism, the most effective creator of growth and wealth, to socialism, a pathetic, failed system of income redistribution controlled by a central government. Directed out of the United Nations, their absurd claims are supported by the media and many deluded politicians.

Is the U.S. government responding in a sensible way? No. When President Obama speaks of "climate change" he means "global warming." The result over the past three decades has been the waste of billions for "research" and other schemes tied to this huge hoax.

Real climatologists, meteorologists, and scientists paying attention to both the past and to present events are forecasting more intense and longer winters – for now a Little Ice Age.