Alan Caruba
The word from Brazil

February 27, 2015
The carnival in Rio de Janeiro from February 13 through the 17th was one heck of a party. It was celebrated by the locals, plus an estimated one million visitors, complete with fabulous parades, street parties and balls. Brazil is blessed with some great beaches, the most famous of which is Ipanema, thanks to the 1962 bossa nova classic "Girl from Ipanema."

Brazil shares borders every other nation in South America except Ecuador and Chile, and has a range of geographic features from the Amazon rain forest to jungles, towering mountains, rivers and rolling plains. In 2016 Brazil will host the Summer Olympics. 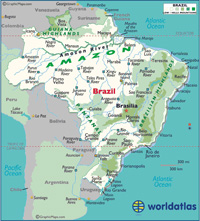 I suspect that's about the only knowledge of Brazil that most Americans have. Brazil is the largest nation in South America. Its most densely populated parts are in the south-central regions that include major cities like San Paulo and Rio de Janeiro. The only Portuguese-speaking nation in both North and South America, it has enjoyed economic growth, but that has slowed.

A friend from Brazil shared news that was not likely to show up except on the business pages because U.S. media tend to ignore Brazil and South America unless its bad news. Brazil's national oil company, Petrobras, has been caught up in a huge scandal that will lead to criminal proceedings. In early February, its CEO, Gracas Foster, and five other top executives resigned.

It's a kickback scandal and what makes Brazil a place to watch is the fact that its president, Dilma Rousseff, served on Petrobras board of directors from 2003 to 2010 when the prosecutors allege that the kickbacks were occurring. Her political party is alleged to have received billions in money skimmed from the company.

In October 2014, she was reelected in what The Telegraph described as a "dramatic run-off and a tense campaign" which she won "by a whisker," just 51.6% of the vote. She was the candidate of the Worker's Party. The months leading up to the election included mass protests, the corruption scandal, and a stalling economy, slipping back into recession for the first time in five years.

Petrobras is the perfect example of why a government-run enterprise, socialism, is never a good idea. Worth $310 billion in 2008 and valued as the world's fifth-largest company, today it is worth just $48 billion. There is a definite sense of crisis in Brazil as its government is posting record budget deficits after a collapse in prices for the soy, oil, and iron that the country exports. Its currency, the real, has seen a drop in value for the past six months.

One observer suggests a possible military intervention to remove the president and others involved in the Petrobras scandal.

All that is bad news, but on top of it San Paulo, Brazil's commercial capital, is running out of water as the reservoirs that supply the nearly twenty million people in the metropolitan area are close to running dry. The water literally goes off around 1 PM until the next day for a few hours but the state water utility denies it is rationing it. The water problem is estimated to last for four to five more years.

America has a long history of isolationism. Early Americans came here to get away from the problems in their home countries, but those problems have ways of affecting our lives as we have seen with the turmoil of Islamic fascism in the Middle East.

We would be well advised to keep an eye on Brazil (and Argentina and Venezuela) and hope it can resolve its current problems, but we can also give thanks that the U.S. is enjoying a boom in energy reserves, particularly oil and natural gas, that protects us against potential upheaval elsewhere in the world.

If we replace the current U.S. administration with one that understands and supports the growth of our energy sector, we will be on our way to a brighter future.