Alan Caruba
It's all bad news for ObamaCare 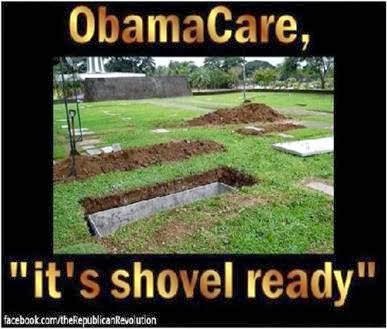 On Wednesday, March 4, the Supreme Court will hear the King v. Burwell case. It is likely to deliver a death blow to ObamaCare when the decision is announced in a few months. About the only good thing ObamaCare demonstrated is that the federal government should be kept from taking over sectors of the nation's economy that are working just fine without it.

Health care expert Edmund Haislmaier and legal expert, both of The Heritage Foundation, provided an explanation of the case. "The question before the Supreme Court is whether the Obama administration overstepped its authority in issuing an IRS ruling that conflicts with the ObamaCare statute. The statute allows payment of ObamaCare subsidies only to individuals who obtain coverage 'through an Exchange established by (a) State.'"

ObamaCare got such a cold reception nationwide that 34 States refused to set up an exchange, forcing the feds to do it. Those exchanges distributed subsidies to individuals participating in them, but the ObamaCare statute "seemingly did not authorize subsidies in such cases." Suffice to say that ObamaCare health insurance is considerably more costly than what one could have previously purchased on one's own; thus the need for the subsidies gambit.

The February edition of Health Care News, published by The Heartland Institute was filled with articles attesting to the failure of ObamaCare. Here are a few excerpts from them.

Devon M. Herrick, Ph.D., a health economist and senior fellow at the National Center for Policy Analysis, noted "Obama touts the claim (that) millions more people are now covered under health care insurance policies through employer plans. However, research has shown exchange subsidies will cause employers to drop coverage...Mandatory benefits are not free; workers bear the cost in the form of lower wages."

Dr. Herrick added, "Obama said (in his State of the Union speech that) 'in the past year alone about ten million uninsured Americans finally gained the security of health coverage,' but he neglected to mention roughly 6 million were coverage through Medicaid expansion and many of them were finding it difficult to find doctors willing to work for the paltry fees state Medicaid programs pay doctors for treatment."

An article by Matthew Glans, a Heartland senior policy analyst, noted that "The Health and Welfare Committee of the Tennessee Senate voted on February 5 to reject a bill that would have allowed Gov. Bill Haslam to expanded Medicare under the Affordable Care Act."

Tom Steward, writing for the Minnesota Bureau of Watchdog.org, contributed to Health Care News noted that "In a significant victory for religious liberty and economic freedom, the American Manufacturing Company received a permanent federal exemption from provisions of the Affordable Care Act that contradict the owner's religious convictions."

Sean Parnell, the managing editor of Health Care News, reported that "Rhode Island officials predicted up to 100,000 residents would use the state-created exchange established under the Affordable Care Act to buy health insurance in 2014. Data from the state show only 27,961 people enrolled during the 2014 open-enrollment period, a number that declined throughout the year as many enrollees failed to pay their first premium or later dropped coverage."

ObamaCare is on critical care because it could die at any time. Not surprisingly, three Republicans, John Kline, Paul Ryan, and Fred Upton, chairmen respectively of the House Committee on Education and Workforce, Ways and Means, and Energy and Commerce, have put together a plan to address the likelihood that the Supreme Court decision will put an end to ObamaCare.

As they said in a recent Wall Street Journal commentary, "If the court rules against the administration, as any fair reading of the law would demand, millions of individuals and families will hit a major roadblock. They'll be stuck with health insurance designed by Washington, D.C., that they can't afford."

"What we propose is the off-ramp out of ObamaCare toward patient-centered health care. It has two parts: First, make insurance more affordable by ending Washington mandates and giving choice back to the states, individuals and families. And, second, support Americans in purchasing the coverage of their choosing."

What a unique idea! Let people choose the health care plan they want and that they can afford. That's the way it used to be before the Affordable Care Act was passed entirely by Democrat votes because the GOP would not support it. That's why Congress is controlled by the GOP these days. And that's why this nation will return to the free marketplace.