Alan Caruba
Only fools trust Obama or the Iranians 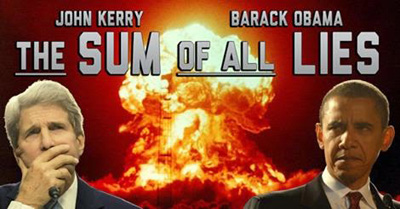 Only fools express any trust in Obama these days or the Iranians who have made him look the fool when no one in their neighborhood or the world trusts a thing they say or do.

After more than six years of listening to President Obama's unremitting lies, when he says of the latest "accord" with Iran, "It's a good deal" and standing in the Rose Garden declares that the U.S. and Iran have reached "an historic understanding" the only history being made his own ignominy and idiocy.

It would be historic if anyone could extend either President Obama or the Iranians any trust. Indeed, since the U.S. created its first atomic bombs to end World War II, one nation after another has secured their own nuclear weapons, starting with the then-Soviet Union who built theirs with plans stolen from us!

We have been down this road before. On April 1st Wall Street Journal columnist Daniel Henninger offered an abridged look at the quarter-century of negotiations with North Korea which agreed to all manner of terms, signed all kinds of agreements, and joined various international organizations to assure everyone of their peaceful intent. He warned that "No agreement is going to stop Iran. Agreements, and a lot of talk, did not stop North Korea."

"Iran," said Henninger, "knows it has nuclear negotiators' immunity: No matter how or when Iran debauches any agreement, the West, abjectly, will request – what else? – more talks. Iran's nuclear bomb and ballistic missile programs will go forward as North Korea's obviously did, no matter what."

All the back-and-forth between the White House and Congress about the "accord" is essentially meaningless. It is mostly a debate about the treaty-making powers the Constitution extends to the executive branch and, at the same time, limits with legislative "advice and consent" of the Senate. For now the Senate can only wait for whatever is decided by June 30, but it is unlikely Obama will send it the text of the agreement.

To influence the outcome, Congress talks of the sanctions it has imposed on Iran and says it will impose again, but Obama has no legal authority to lift those sanctions, only Congress does. 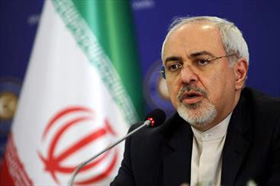 The same day the President made the announcement, Javad Zarif, the Iranian counterpart to Secretary of State John Kerry made his own announcement. The U.S. and Iran, he said, had agreed in principle to let Iran continue running major portions of its nuclear program. "None of those measures," intended to slow Iran's progress, "include closing any of our facilities. We will continue enriching; we will continue research and development."

This is the result of 18 months of "negotiations" with Iran. In the same way the U.S. caved to North Korea since the 1990s, it has caved to Iran and it has done so with the blessing of the European Union and the other members of the P-5+1, France, Great Britain, Russia, China, and Germany.

For good measure, to show how wonderfully warm the relations between Iran and the U.S. are, within hours after Obama's announcement, Foreign Minister Zarif accused the U.S. of lying about the details of the tentative framework – "the historic understanding" – saying that the U.S. had promised the immediate termination of sanctions.

The notion that we would know if Iran was continuing its nuclear program because the United Nations' International Atomic Energy Agency (IAEA) would be inspecting its facilities is about as credible as similar inspections in North Korea when, in 2002, it cut the IAEA seals on its nuclear factories and withdrew from the non-Proliferation treaty, starting a nuclear reactor. It has pursued its nuclear weapons and missile programs ever since.

In the same fashion as the Soviet Union, China, and Israel, we didn't know that either Pakistan or India had acquired nuclear capability until after they tested theirs. That's how we will know when Iran has nuclear weapons. It already has intercontinental missiles with which to deliver them.

As quoted in an April 3 article by Mark Dubowitz, executive director, and Annie Fixler, policy analyst, of the Foundation for Defense of Democracies, they cite an unnamed "senior State Department official" as saying "The truth is, you can dwell on Yemen, or you can recognize that we're one agreement away from a game-changing, legacy-setting nuclear accord on Iran that tackles what everyone agrees is the biggest threat to the region."

Unless one believes in unicorns and other fantasies, this latest "accord" and what we are being told about it by the President and the State Department is not a great achievement. It is doomed to failure because Iran has had no intention of doing anything other than getting economic and other sanctions removed. Time is on their side as they work to develop their own nuclear weapons.