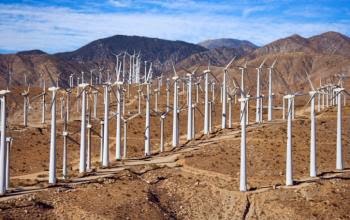 Imagine you wanted to get in your electric car and drive a considerable distance. It wouldn't take long for your car to run out of power, so you would have to have another car, one using gasoline, to drive behind you to make sure you reached your destination.

That's a description of "renewable energy," wind and solar, in America today because they both require backup from traditional energy sources such as coal, oil, natural gas, and nuclear. And "renewable energy" based on "free" sun and wind power costs more to produce and purchase. Need it be said that the sun does not always shine consistently everywhere or at night and that the wind does not always blow?

Within twenty-four hours of one another I received a news release from the Governor's Wind Energy Coalition celebrating the election of a new chairman and vice chairman, and read a CNN news article saying that "The White House wants to put more returning servicemen and women to work manufacturing and installing solar panels" as part of "his growing list of climate actions meant to combat global warming."

That list was a twelve-page long, single-spaced White House fact sheet. The White House seems to think that the states can do something about "climate change," but the climate is measured in decades and centuries, not whether it is going to rain next Monday which is something we call "the weather." And just as you can do nothing about the rain, neither can you do anything to affect the climate decades from now.

The White House has a problem. There is no "global warming." Even if you change the name to "climate change," the Earth has been in a natural cooling cycle for the last eighteen years.

For the past 5,000 years humans have, as often as not, "done something" about the climate by moving somewhere else it was less of a bother and threat or found ways to adapt. Other than prayer, there was and is nothing humans can do about Mother Nature.

Most surely, getting veterans to manufacture solar panels is about as lame and stupid an idea as the President has proposed in the last 24 hours. Does the name "Solyndra" ring a bell? It was one of several solar farms that, along with wind farms went belly-up, leaving investors and consumers with nothing but the sunlight and passing breezes.

Indeed, the best news of late has been that the U.S. Senate has rejected a proposal to extend the federal wind Production Tax Credit (PCT) for another five years. The wind producers have benefitted from it for three decades. The federal subsidy to wind-energy producers expired along with other tax breaks at the end of 2013, but was retroactively extended through 2014 as part of the Cromnibus budget bill passed last December.

The PCT was intended to provide what was a then-new energy industry a helping hand, but it kept being extended and the industry benefitted as well from renewable energy mandates (REM) in 29 states and the District of Columbia. They require that a specific amount of electricity be purchased from renewable energy, wind or solar, producers. All that managed to do was drive up the cost of electricity to consumers. This is what happens when politicians get involved.

That's a good reason to wonder why there is a Governors Wind Power Coalition in the first place. It consists of 23 Democratic and Republican governors from every region of the nation "working together to develop the nation's wind energy resources," but the nation doesn't need wind energy which produces an unpredictable amount as opposed to traditional resources such as coal.

At the same time the President is talking about solar and wind power, his administration is pursuing a relentless "war" on coal that is forcing the primary source of electricity in America, coal-fired plants, to shut down. If that doesn't sound like treason, then consider too that the U.S. is the greatest producer of oil and natural gas in the world and we have at least two century's worth of known coal reserves. We have absolutely no need for wind or solar energy.

When Obama gave his State of the Union speech in 2014, solar power represented a pathetic 0.2 percent of the U.S. electricity supply according to the U.S. Energy Information Administration. According to the Energy Research Institute, in 2013 wind power provided 1.6% of all the energy consumed in the U.S.

There isn't a single good reason for either wind or solar power in an energy powerhouse like the United States. They are both costly, unpredictable, and a threat to a number of animal species. Neither the science, the cost, nor the recent history of "renewable energy" provides a single good reason to force Americans to pay for this "green" failure.