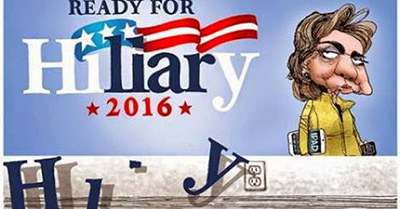 While we endure the daily lies of President Obama, do we really want to have another four to eight years more of Hillary Clinton's? It's not like we don't have ample evidence of her indifference to the truth and that is not what America wants in a President, now or ever.

The office has already been degraded to a point where neither our allies nor our enemies trusts anything Obama says. Do we really want to continue a process that could utterly destroy our nation?

Hillary Clinton's announcement that she intends to run for President is predicated not on any achievements in her life beyond having married Bill Clinton. Instead, her message is that America needs a woman as President. Having already elected an abject failure because he was black, one can only hope and pray that enough voters will conclude that America needs to avoid race or gender to be the determining factor.

In 1974 the 27-year old Hillary was fired from a committee related to the Watergate investigation. Jerry Zeifman, a lifelong Democrat, supervised her and when the investigation was over, he fired her and refused to give her a letter of recommendation. When asked why, he said, "Because she was a liar. She was an unethical, dishonest lawyer. She conspired to violate the Constitution, the rules of the House, the rules of the committee, and the rules of confidentiality."

She has not changed. Writing about her emails, Ronald D. Rotunda, a professor at Chapman University's Fowler School of Law, said her admitted destruction of more than 30,000 emails "sure looks like an obstruction of justice – a serious violation of the criminal law. The law says that no one has to us email, but it is a crime (18 U.S.C. section 1519) to destroy even one message to prevent it from being subpoenaed." The law, said Rotunda, punishes this with up to 20 years imprisonment.

Instead, Hillary is asking voters to give her at least four years in the highest office in the land.

Even pundits like The New York Times' Maureen Dowd, writing in mid-March responded to Hillary saying "None of what you said made any sense. Keeping a single account mingling business and personal with your own server wasn't about 'convenience.' It was about expedience. You became judge and jury on what's relevant because you didn't want to leave digital fingerprints for others to retrace."

Around the same time as Dowd's rebuke, I wrote that I thought that the revelations about the emails and the millions the Clinton foundation received from nations with whom she was dealing as Secretary of State would be sufficient for those in charge of the Democratic Party to convince her not to run. I was wrong. I was wrong because I profoundly underestimated Hillary's deep well of ambition and indifference to the laws everyone else must obey. I was wrong because the Democratic Party is totally corrupt.

It is not as if anyone paying any attention would not know that she is politically to the far Left, a politician who does not believe that the powers of our government are derived from "the consent of the governed." Throughout her life she has let us know that with quotes such as:

"We're going to take things away from you on behalf of the common good."

"(We) can't just let business as usual go on, and that means something has to be taken away from some people."

"I certainly think the free-market has failed." These quotes are the personification of Communism.

In March, the political pundit, Peggy Noonan, writing in The Wall Street Journal, said "We are defining political deviancy down." Referring to the email scandal, she asked "Is it too much to imagine that Mrs. Clinton wanted to conceal the record of her communications as America's top diplomat...?" That was the reason she ignored the government's rules regarding such communications. Rarely mentioned is the very strong likelihood that her email account had been hacked by our nation's enemies and thus everything she was doing, officially and privately, was known to them.

"The story," said Noonan "is that this is what she does and always has. The rules apply to others, not her." That is, simply said, a criminal mentality. "Why doesn't the legacy press swarm her on this?" asked Noonan. "Because she is political royalty."

We fought a Revolution to free America from the British royalty. This was so ingrained in the thinking of the Founding Fathers that section 9 of Article One of the Constitution says "No Title of Nobility shall be granted by the United States. And no Person holding any Office of Profit or Trust under them, shall, without the Consent of Congress, accept any present, Emolument, Office, or Title, of any kind whatever from any King, Prince, or foreign State." That's what the foundation did.

Noonan had earlier written a book about Hillary. "As I researched I remembered why, four years into the Clinton administration, the New York Times columnist William Safire called Hillary 'a congenital liar...compelled to mislead, and to ensnare her subordinates and friends in a web of deceit.'"

"Do we have to go through all that again?" asked Noonan. "A generation or two ago, a person so encrusted in a reputation for scandal would not be considered a possible presidential contender. She would be ineligible. Now she is inevitable."

Well, maybe not inevitable. We have a long time to go until the primaries arrive and then the election. We have enough time to ask ourselves if we live in a republic where merit, integrity, and honesty are still the standards by which we select our President.