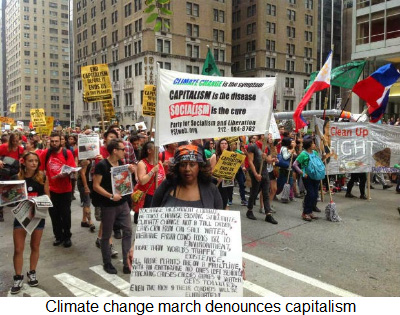 There is so much at stake for the charlatans that have foisted the failed "global warming" hoax, followed by the equally dubious claims and predictions regarding "climate change," that it should come as no surprise that they have begun to wage a propaganda war on the courageous scientists who led the struggle to educate the public about the truth and the organizations who supported their efforts.

Along the way, many groups and publications claiming scientific credentials abandoned those standards to pump out global warming and climate change propaganda. Scientists discovered they could secure grant money for "research" so long as it supported claims that the North and South Poles, as well as all the world's glaciers were melting. "Research" that predicted vast hurricane activity or a massive rise in ocean levels became routine headlines. None of it occurred. Both the government and liberal foundations provided millions to maintain the hoax.

Now we have a President claiming that his daughter's asthma was due to "climate change." It is obscene nonsense. If this was just a disagreement between scientists, we could look on as the facts determine the outcome, but there are vast agendas as stake so we have to keep in mind that billions have been wasted on "renewable energy" alternatives to replace fossil fuels; the oil, coal, and natural gas that are the heart's blood of modern nations and our lives.

We have to ask why the United Nations Framework on Climate Change takes such a dim view of the world's population that it cites its use of energy and other resources as a reason to reduce it instead of celebrating it. Hard-core environmentalists do not like humans because they build houses, start businesses, need roads, and generally consume a lot and then create trash. Climate change is also the platform the U.N. is using to "transform" the world's economy.

We have to ask why our government is engaged in shutting down the coal-fired plants that provide the bulk of the electricity we use. This isn't just a war on coal. It is a war on our entire economic system, capitalism. It is a war on Americans by their own government.

Lately, politicians at the federal level have declared war on those scientists whose research and findings have helped the public conclude, along with eighteen years of a natural cooling cycle, that "global warming" is no threat and that we have far greater threats to address than the vague notion that "climate change" is a problem we humans can affect in any way. We can't and we don't.

A recent example has been letters sent to seven university presidents by Arizona Rep. Raul Grijalva, the ranking Democrat on the House Natural Resources Committee asking for information on scientists and professors who had given congressional testimony that raised questions about "climate change." Grijalva had no legal authority to request such information, but his intention was intimidation. In 2013, when asked about his legislative agenda by These Times, he replied "I'm a Saul Alinsky guy" referring to the activist whose book, "Rules for Radicals," spells out ways to attack one's political enemies.

Pete Peterson, the executive director of the Davenport Institute for Public Engagement at Pepperdine's School of Public Policy, identified Grijalva's letters as "scare tactics" concluding that we have come to a time when "The inability of politicians to confront another's argument much less to attempt to persuade the other side, has become standard operating procedure. Now this toxic approach is extending to the broader world of policy – including scientific research."

Around the same time, Sen. Sheldon Whitehouse, Sen. Barbara Boxer, and Sen. Ed Markey sent a letter to a hundred companies, grade groups and other organizations "affiliated with the fossil fuel industry asking whether they spent money to support climate research." The message was simple: do not sponsor research that would reveal inaccuracies or falsehoods regarding claims that "climate change" was a threat. The inference was that scientific research receiving such funding would betray scientific standards in ways that government or foundation funding would not.

Suffice to say the letters evoked outrage. As a policy advisor to the free market think tank, The Heartland Institute, I was aware of the response of its president, Joe Bast who called the letters something that "fascists do." He was not alone. The Washington Times called the Senators "climate change Toquemadas" and The Wall Street Journal said the letters were nothing more than an effort to silence science.

When Sen. Whitehouse aired his unhappiness in an April 14 blog post the Huffington Post, "Right-Wing Groups Get Overheated on Climate Questions", Bast responded asking, "If the Senator's letter wasn't intended as harassment of individuals who disagree with his extremist views on the climate, why the overly broad demand, the ridiculous deadline, the implied threat of action, and the news release saying it was intended to expose a diabolical conspiracy of 'right-win groups'?"

When "climate change" reaches the political heights of Congress and the White House, it should come as no surprise that the charlatans who want to use this hoax for their own benefit and agendas are going to unleash efforts to smear and intimidate those scientists who have put true facts before the public.

In late March, Michael Bastash of The Daily Caller reported that "A new Gallup poll shows that Americans' concern about warming has fallen to the same level it was in 1989. In fact, global warming ranked at the bottom of a list of Americans' environmental concerns, with only 32 percent saying they were worried about it a 'great deal.'"

That's what has the politicians and U.N. officers on the offensive to silence scientists and defame think tanks and other organizations that have helped Americans come to the sensible conclusion that a "warming" isn't happening and the planet's climate is something over which they have no control.