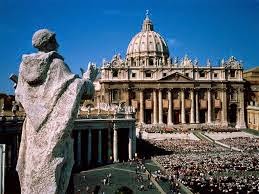 I have devoted the better part of more than two and a half decades speaking out against the charlatans that have created and maintained the greatest hoax ever imposed on modern man. At the heart of this hoax has been the United Nations environmental program and at the heart of that program is an agenda to initiate a massive redistribution of wealth from industrialized, successful nations to those who have suffered, as often as not, from being ruled by despots of one description or another.

It is with profound sorrow and disappointment that I must now speak out against Pope Francis, the leader of 1.2 billion Catholics, whom observers have noted has "a green agenda." He has become an outspoken advocate on environmental issues, saying that taking action is "essential to faith" and calling the destruction of nature a modern sin.

Before proceeding, let me note that I am not Catholic. My thoughts regarding the Pope are rooted in my knowledge of the long record of lies, false predictions, and claims by various environmentalists over the years.

When the Vatican announced it would hold a conference on April 28 called "Protect the Earth, Dignify Humanity: The Moral Dimensions of Climate Change and Sustainable Development," I wondered why the Vatican is not holding a conference to organize the protection of Christians – particularly in the Middle East – against the wholesale genocide that is occurring. The Pope is not alone in this. There appears to be little urgency in addressing a threat comparable to the Holocaust of the last century that consigned six million Jews to death for being Jews.

I frankly do not know what is meant by "the moral dimensions of climate change." Climate change is something that was occurring long before there was a human population on planet Earth. It is the measurement of the previous global cycles through which the Earth has passed for billions of years. It is profoundly natural. Applying a moral dimension to it makes no sense whatever.

As for "sustainable development," that is a term that environmentalists use to deny any development that benefits the human population.

Environmentalism is deeply opposed to the use of any energy resource, coal, oil, natural gas, as well as other elements of the Earth we use to enhance and improve our lives with habitat of every description from a hut to a skyscraper. Over the last five thousand years we have gone from being largely dependent on wood to the use of fossil fuel energy that keeps us safe against nature – blizzards, floods, hurricanes, forest fires, et cetera.

At the heart of environmentalism, however, is a deep disdain and antagonism to the human race. From its earliest advocates, one can find allusions to humanity as "a cancer" on the Earth. The Catholic Church has been an advocate for the human race, most notably opposing abortion that kills humans in the womb. Its charitable work is legendary.

To grasp how far the forthcoming conference is from the most basic beliefs of Catholicism, one need only take note of the persons scheduled to speak. They include the UN Secretary General, Ban Ki Moon, the leader of the institution in which the hoax of global warming was created and advanced. Another is Jeffrey Sachs, the director of the United Nations Sustainable Development Solutions Network, another voice for global warming, but neither is going to tell those attending the conference that there is no warming and that the Earth has been a natural cooling cycle for the past eighteen years, tied entirely to a comparable cycle of the Sun.

The Green's response to the voices of those scientists who courageously spoke out to debunk their lies has been to denounce and try to silence them. There is no science to support the global warming hoax.

The one-day summit will include participants from major world religions. The Pope will issue an encyclical on the environment later this year.

Is there a religious or spiritual aspect to opposing the forthcoming conference and encyclical? One need look no further than Genesis. In a Wall Street Journal commentary, William McGurn drew the lesson that it offers "a reminder that God's creation is meant to serve man – not man the environment.

Quoting Genesis 2:15: "The Lord God took the man and put him in the Garden of Eden to work it and take care of it" concluding that "the Earth is to be worked and that this work and the fruit it bears are also blessed." The spiritual truth to be drawn from this is that man is the steward of the Earth. That does not mean its resources should be abandoned because of bogus claims that the Earth is doomed.

McGurn reminds us that "it is the have-nots who pay the highest price for the statist interventions so beloved the Church of St. Green." There are more than a billion on Earth who do not have any access to electricity which, in addition to hydropower, is generated by coal, oil and natural gas. Lacking the means to deter the impact of insects and weeds on agriculture, much of the Earth's annual crops are lost. Lacking access to the beneficial chemicals that protect humans from the diseases transmitted by insects, millions die needlessly.

The Heartland Institute, a free market think tank is leading the effort to alert people to the dangerous message of the Vatican conference because "many people of faith who are familiar with the science and economics of climate change are worried this event will become a platform for alarmism over a controversial scientific issue" noting that "there is no scientific 'consensus' on whether there is any need to reduce mankind's use of fossil fuels."

The conference agenda is "profoundly anti-poor and anti-life" says the Institute. Plainly said, the Vatican conference incomprehensively would advocate policies whose only result would be the reduction of human life in order to "sustain" the Earth.

"These unnecessary policies would cause the suffering and even death of billions of people. All people of faith should rise up in opposition to such policies."

The Heartland Institute is sending a team of scientists and climate policy experts to Rome where they will be joined by Marc Morano of the think tank, CFACT. Says Morano, 'Instead of entering into an invalid marriage with climate fear promoters – a marriage that is destined for an annulment – Pope Francis should administer last rites to the promotion of man-made climate fears and their so-called solutions. This unholy alliance must be prevented."