Daniel Cassidy
Too much is at stake; Steele must go!

March 29, 2010
As we have noted here, here, here, here, and here, the current Chairman of the Republican National Committee is not merely unqualified for the job he has been given to do, there is every indication that he is mentally disturbed. 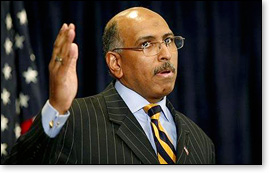 The nation has crossed the line to tyranny, our Constitution has been trammeled, the checks and balances that are supposed to be guaranteed by three, separate and equal branches of government no longer exist, our currency is debauched, rampant inflation is around the corner, the nation faces economic collapse and control by enemy creditors, our President has alienated our traditional allies while cozying up to Marxist despots, and a tidal wave of illegal immigrants may soon be added to voter rolls, ensuring that those destroying our nation may continue unhampered by the democratic process.

We need an opposition that is one in mind and spirit with our nation's founders. Republicans must be willing to put their lives, fortunes, and sacred honor on the line to take the nation back from those destroying it. We must all do whatever is necessary to restore the foundations of the old republic, repeal destructive and alien socialism, and ensure that the Constitution never again comes under such an internal assault.

In the face of our national crisis, we have a Republican Chairman who refuses to spend time building the party machinery, raising funds, and recruiting the strongest candidates. And only a few months ago, he dismissed any idea of taking back the Congress. Instead, he has promoted himself and his book, while giving comfort and amusement to those he should challenging. Today we learned that in his self promotion, he travels in style and obviously has no understanding that America's hope lies in moral, spiritual and cultural renewal.

"A February RNC trip to California, for example, included a $9,099 stop at the Beverly Hills Hotel, $6,596 dropped at the nearby Four Seasons, and $1,620.71 spent [update: the amount is actually $1,946.25] at Voyeur West Hollywood, a bondage-themed nightclub featuring topless women dancers imitating lesbian sex."

Too much is at stake to tolerate the antics of this affirmative action buffoon.