Daniel Cassidy
Pope Benedict shows that where the cross is, there also is the resurrection 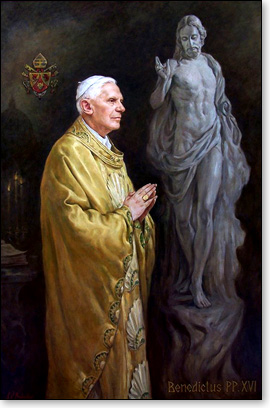 This Holy Week is particularly poignant and meaningful for Catholics. That a baseless, undocumented smear job, by a newspaper already discredited for similar attacks on the Church dating back at least sixty years, should be taken seriously, is astounding. It reminds us of how so many have chosen to believe attacks on Pope Pius XII. That great Pontiff was applauded and honored by the founders of Israel for all that he did to save thousands of Jews. The Chief Rabbi of Rome at the time was so moved by the courageous example of Pius XII, that he converted to Catholicism and was baptized in 1945 by the Pope he revered. And yet the world chooses to believe the allegations from a 1960's play written by a Marxist, with funding from the KGB.

We have our suspicions as to who is behind a coordinated media effort to defame this holy Pope. While all the facts have been presented clearing Pope Benedict of any culpability in the matter, no evidence or reasoned argument will persuade those looking for any means to attack the Church.

The role Pope Benedict is playing in binding ancient wounds and uniting believers against unprecedented evil from those who walk in darkness, is extraordinary. He is a powerful force for good and a bulwark against the father of lies and a growing culture of death and darkness.

The secular world thinks that such attacks will silence his message and diminish his influence; but for Catholics it is quite the opposite. We see a Vicar of Christ walking toward Calvary, united ever more closely with our Lord and His passion. It is fitting that all of this comes at a time when the Christian world commemorates the passion of Christ — His agony in the garden, His scourging at the pillar, the mocking of soldiers, the abandonment by friends, the painful, humiliating walk to Calvary, His torture and death on the Cross.

Those of us who will relive that passion and death this week know that where the cross is, there also is the resurrection. Like gold proven in the furnace, these attacks on Pope Benedict XVI are a sure sign for us all that he is following the way of the cross faithfully. And his suffering will merit a glorious Easter for all the Body of Christ.