November 23, 2010
With Republicans gaining more state legislative seats nationwide than at any time since 1928, it is easy to overlook the gain of a mere 3 state house seats in South Carolina. However, one race in particular — that of South Carolina House District 108 — is a primer on how a clear, bold, uncompromisingly conservative message, coupled with savvy party leadership, can dislodge even the safest, most entrenched incumbent. 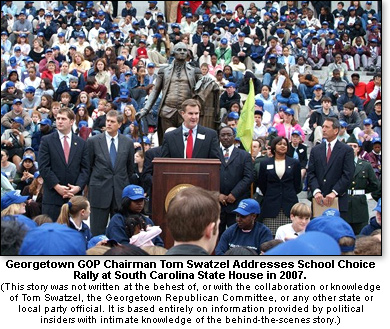 Representative Vida Miller, D-Pawleys Island, a local gallery owner, former school board member, and 14-year state House incumbent, was probably confident of an eighth term in Columbia when her only Republican opponent turned out to be Kevin Ryan, a 22 year-old grad student and political neophyte who still lives at home with Mom and Dad.

While Ryan did the things that successful candidates do — spent hours on the phone calling voters and walking door-to-door throughout the district — political experts in Columbia believe it was a powerful postcard campaign crafted by Georgetown County GOP Chairman Tom Swatzel that defeated Miller, who had represented the district since her opponent was 8 years old. 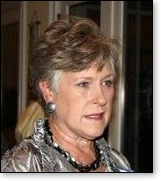 Despite liberal associations and a decidedly liberal voting record, Miller had passed herself off as a "conservative" Democrat, winning by large margins every two years regardless of how her party fared in state or federal elections. This time, Swatzel was determined to put an end to any misunderstanding about Miller's record and political leanings. Targeting swing precincts, Swatzel drew striking contrasts between what voters assumed about their state representative and Miller's extensive voting record.

The county party's mailing on South Carolina's Marriage Protection Amendment pointed out that on the 2006 ballot, 77 percent of South Carolinians had supported defining marriage as only between ONE MAN and ONE WOMAN. Yet when the House voted 96 to 3 to put a Marriage Protection Amendment on the ballot in the first place, Miller abstained, and even after voters overwhelmingly supported the measure, including in her own district, Miller abstained again on a 2007 motion to ratify the people's vote.

Even though every statement on the card is true, including the characterization of Ketner as an openly lesbian activist, Georgetown County Democrats manufactured as much outrage as they could in response, and predictably, squishy and squeamish "moderates" among the Republican ranks began wringing their hands over Swatzel's hard-hitting postcard campaign, some even demanding that he cancel mailing the remaining postcards.

Swatzel deftly outmaneuvered the outraged Democrats, challenging them in a guest commentary published by local papers to point out anything in the cards that wasn't true — they couldn't, with former county Democratic chairman Jamie Sanderson even admitting on his blog that "nobody questioned whether (the postcards) were true or not." Swatzel just as effectively bucked up or ignored the hand-wringing Republicans, and the rest of the entire series of postcards made their way as planned, one every three or four days, to voters' mailboxes.

Swatzel recognized that motorists, facing the highest gas prices in several years, would not appreciate Miller's support for higher gas taxes and the resulting increased cost of groceries.

South Carolinians love pork barbecue, cooked low and slow, but pork-barrel spending is quite another thing. The Club for Growth had compiled a list of 50 of the state's most egregious pork projects — tens of millions for local festivals which Columbia politicians have used to buy votes. Swatzel made sure that voters in District 108 knew that "Vida Miller supported all fifty — the worst pork record in the state House!"

Swatzel knew that a state reeling from budget deficits, out-of-control spending, and high unemployment would not appreciate Miller's support for taxpayer funded political campaigns. This mailing was sure to sway more than a few voters. This card also featured a photo of Miller and lesbian activist Linda Ketner, but this time with a one-two punch message: it reminded voters once again of Miller's refusal to support the overwhelmingly popular Marriage Protection Amendment, but also pointed out that under Miller's taxpayer-financed campaigns scheme, even a multi-millionaire such as Ketner, an unsuccessful 2008 Congressional candidate, could force taxpayers to finance her future political campaigns, including voters who disagree with her left-wing political ideology.

National left-wing politicians such as John Edwards, Joe Biden, Howard Dean, and John Kerry, among others, are not particularly popular politicians in South Carolina, but they all have one thing in common: they've all financially supported Vida Miller's political campaigns, and Swatzel made sure that voters in Georgetown County knew it. This card featured photos of all of them and, once again, Ketner, also pointing out how Miller had suported policies in Columbia pushed by the all but openly admitted socialist Obama Administration.

Perhaps the most powerful mailing of all was this card — targeted only to households identified by the county party's voter identification surveys as being pro-life — summing up the pro-life position and exposing Vida Miller's record of support for a culture of death and campaign support from national abortion industry PACs.

As you can see from the postcards themselves, it was not just their hard-hitting and factual content that proved effective, but their clever eye-catching and in some cases humorous design and graphics. On a local online forum, former Georgetown mayoral candidate Marty Tennant wrote after receiving one of the cards: "Anyone seen today's mailer? I am now officially shocked. I've never seen this kind of activity. The local party wants to get rid of Vida, and BAD! The person designing them is a genius in my opinion. Let's hope it sticks on Election Day."

In the last week of the campaign, Swatzel and the Georgetown GOP reinforced its postcard campaign by running this very effective radio ad.

And on election day, it did stick.

Fellow blogger Earle Capps wrote that even in a GOP tsunami election, the result was shocking: "Democratic Rep. Vida Miller had held onto this GOP-leaning district since 1996 through good years and bad, so her upset at the hands of CofC graduate student Republican Kevin Ryan, who carried 52% of the vote, stunned just about everyone."

Besides the obvious — the election results themselves — there's even more definitive proof of just how effective Swatzel's postcard campaign was in swaying voters to produce the stunning outcome.

At the end of September, before the postcards were mailed, a candidate preference phone survey was conducted of registered voter households in Georgetown County.

At the end of October, after the postcard campaign, the 680 voters previously I.D.'ed as supporting Miller were resurveyed. (Note that in the interim, the campaign materials circulated by 22-year old GOP challenger Kevin Ryan's campaign focused exclusively on providing voters a strictly positive message about his well-meaning but — simply because of his age — somewhat limited qualifications for the office. None of Ryan's material contained any criticism of Miller's voting record, campaign finances, or ideology.)

Of the 376 previously ID'ed Miller supporters who responded the second time:

13% had switched from Miller to Ryan.

45% had moved from Miller to undecided.
Less than half remained committed to Miller!

Given that in political races featuring a long-time, well-known incumbent, self-professed "undecideds" really mean they're no longer comfortable voting for the incumbent, these results indicate Swatzel's dramatic success in persuading even those previously identified as definitely supporting Miller to vote against the Democratic incumbent.

In his last election cycle as GOP county chair, Tom Swatzel proved himself again to be one of the most savvy and effective political leaders in the state of South Carolina. He was a Shrine Bowl football standout, licensed U.S. Merchant Marine officer, and respected longtime marina and deep sea sportfishing business owner in Murrells Inlet before entering electoral politics for the first time in 1994, when he became the first Republican elected to Georgetown County office since Reconstruction, winning 62 percent of the vote to oust a two-term incumbent Democratic county councilman. He helped other Republicans win office thereafter, and when he honored a self-imposed term limits pledge after two terms on county council, he helped his longtime business partner win the seat to replace him. By 2008, under Swatzel's chairmanship, the county GOP captured a majority on the county council for the first time in history.

He is a prominent statewide leader in the School Choice movement, having served for five years as chairman of South Carolinians for Responsible Government, a statewide organization dedicated to improving public education and parental choice by financially empowering Palmetto State parents, including low-income and minorities, to be able to choose the best and safest schools for their children.

He was just renominated by the governor and reappointed by the U.S. Secretary of Commerce to a second term on the federal South Atlantic Fisheries Management Council, which earlier this year — over Swatzel's objections — unveiled a plan to ban fishing of certain fish populations off the coasts of N.C., S.C., Georgia, and Florida. Swatzel is credited by some observers as having literally saved South Carolina's coastal fishing, tourist, and restaurant industries after he successfully orchestrated a grassroots, political, and media campaign demanding that South Carolina be removed from the federal fishing ban. He authored resolutions adopted by both the General Assembly and numerous city and county councils along the coast objecting to the ban, then remarkably succeeded in shepherding through the fisheries council itself a motion to exempt South Carolina, and South Carolina only.

Unfortunately for the Georgetown GOP, and after having ousted Miller, one of the top goals he outlined when he agreed to serve as chairman four years ago, Swatzel this week will announce that he'll once again honor a self-imposed term limits pledge and won't run for reelection as county chairman. Having sold his sport-fishing business, it's expected he'll announce the launch of a political campaign, public relations, lobbying, and consulting firm to, at least for a while, make a living doing what he's previously done effectively as a volunteer.

However, given his proven ability to produce public policy results and win voter support with clear, hard-hitting, fact-based campaigns, we can't think of a better challenger to take on South Carolina's rogue RINO Senator Lindsey Grahamnesty in the 2014 GOP primary.

We relish the thought of what Tom Swatzel, the Georgetown giantslayer, might do with an incumbent who has called South Carolinians "racists" for opposing amnesty for illegal aliens, and who has supported the nationalization of US banks, massive new taxes under cap and trade legislation, the fingerprinting and imposition of ID cards for law-abiding Americans, and the appointment of Marxist lesbians to the US Supreme Court.

What might he do you ask? Just ask Vida Miller.