May 19, 2011
The Catholic University of America has announced that Speaker of the House John Boehner will receive an honorary doctoral degree in law and deliver the commencement address when the pontifical university awards 1,500 bachelor's, master's and doctoral degrees on May 14.

In response, leftist faculty members from CUA and other prominent Catholic universities have published an open letter challenging the Speaker for a voting record in opposition to big government, socialist programs and his leadership on the 2012 budget. The signatories claim that the budget "guts long-established protections for the most vulnerable members of society." The text of their letter is here.

The amount of welfare-state spending in the fiscal year 2012 budget is a prudential matter on which Catholics may freely disagree. Indeed, whether there are Social Security, Medicare and Medicaid programs is a matter on which Catholic laymen, guided by well-formed consciences, have a right to debate and decide. There is nothing sacred about the questionably effective programs of Lyndon Johnson's Great Society, and Jesus never urged Caesar to ensure social justice by increasing entitlement spending. However, Church teaching on the sanctity of human life, from conception to natural death, and the sanctity of sacramental marriage between one man and one woman are fundamental, absolute, and non-negotiable. Did any of these so called "Catholic educators" raise their collective voice when a "Catholic" of another sort, Speaker Nancy Pelosi, was (and is) advancing a culture of death by promoting government funding for abortion and the legalization of same-sex marriage?

One of the greatest acts of injustice against the poor in the United States today is our public education system. In most inner-cities more than half the students entering high school drop out and fewer than half of those who remain are able to pass state-mandated tests required for graduation. In some schools students are more likely to receive a prison term than a high school diploma. I've been involved in the school choice movement for over 25 years and don't recognize a single name, among those protesting Speaker Boehner's honorary degree, as being active in that movement for civil rights and social justice.

Like the teacher unions that benefit from a wasteful, over-funded, corrupt and ineffective educational system, the poverty pimps protesting Speaker Boehner's presence at The Catholic University of America, are the chief beneficiaries of government programs that serve providers and doom the intended recipients to the bondage of dependency. 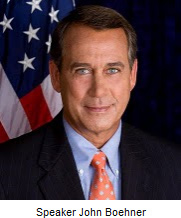 The vast majority of parents and students at The Catholic University of America commencement ceremonies will warmly welcome the Speaker of the House and proudly share the day's honors with him. They should remember, however, that when university development personnel come knocking, it might be best to talk about how some faculty salaries could better fund inner-city scholarships "for the most vulnerable members of society." That would be a sure way to show a preferential option for the poor and build the Kingdom of God.