September 27, 2011
We received an unsolicited robo conference call tonight from Rick Perry and his South Carolina campaign organization. Like his vaccination mandate for little girls, it was an opt-out, not an opt-in phone call. Hosted by former state party chairman Katon Dawson, the call was apparently directed to several hundred GOP activists in South Carolina. It seems to have been motivated by the need to answer all the questions he was incapable of answering without a script during the debate in Orlando last week. 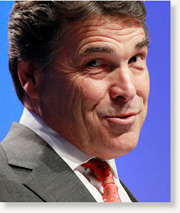 Perry attempted to explain why Texas provides a $22,000 annual tuition discount for the children of illegal aliens; why he opposes securing the border with a wall or fence; and why he attempted to mandate that every 11 year-old girl in Texas receive a costly and controversial vaccine made by campaign contributor Merck Corp. At the end of rambling, incoherent explanations, he still seems to us soft on illegal immigration, someone who would continue to be fast and loose with taxpayers' dollars, and one who fails to understand why Americans are appalled by an executive fiat mandating that citizens of our Republic do anything, much less have their 11-year-old daughters vaccinated for sexually transmitted diseases.

There was no talk about ending America's undeclared, unconstitutional wars. He wants an amendment to the Constitution requiring Congress to balance the federal budget, but we didn't hear anything about the budget he would propose. He's for "pushin the personal rates down, pushin the corporate rates down," but other than eliminating the U. S. Department of Education, there was no indication as to how federal spending would be reduced and the budget balanced by a Perry administration

When all was said and done, we were left wondering: